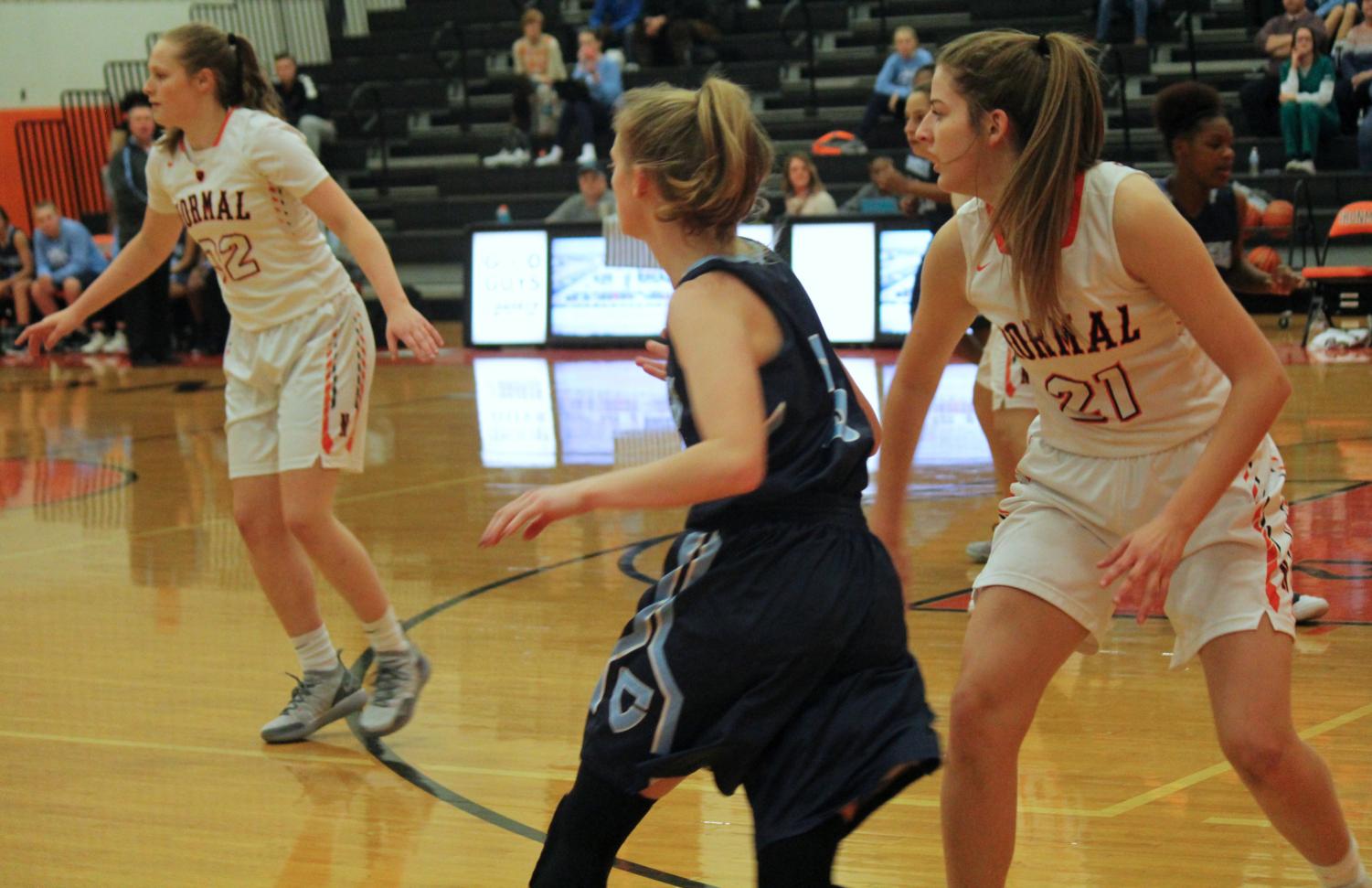 Schneringer and Oloffson return for the Lady Iron; the upperclassmen are expected to lead the team in production this season. (Kim Halm)

Schneringer and Oloffson return for the Lady Iron; the upperclassmen are expected to lead the team in production this season.

The girls basketball team will begin their 2019-20 campaign with the annual Intercity tournament Monday, November 18 as they take on tournament hosts Central Catholic at 7:30 p.m.
The Lady Iron, who shared the Intercity crown last year with West and Central, hope to take it for themselves this season.
The varsity team had an eventful offseason, with point guard Maya Wong opting to reclassify and graduate early, while assistant coach Mr. Dave Feeney stepped down from his position.
Wong opted to continue her basketball career at Illinois State University, while several factors influenced Feeney’s decision to leave the coaching staff.
Head coach Mr. Marcus Mann will miss both of these pieces from last year’s team.
“Maya was a great player, one that any program would struggle to fill the shoes of,” Mann said. Wong took home Pantagraph All-Area first-team honors in her final season with the Lady Iron. She will be redshirting in her first year at ISU.
Mann described Feeney as “an irreplaceable cog in our machine.”
“He is somebody that I still bounce ideas off of and value his thoughts and ideas very much,” Mann added.
With those losses, along with the graduation of seniors Abby Feit, Cassidy Kraft and Katie Broad, this year’s team may seem shorthanded on paper. The team will be without their leaders from last season in points and rebounds in Feit and assists in Wong .
Aside from production, the program will also miss the leadership from those five individuals not returning from last year.
Not all was lost, however, as Mann has plenty to be confident about: “Our seniors are in the right position, but we also have great leaders that are underclassmen on the varsity team that should be able to step up and help….”
The focus should naturally shift to senior G/F Kylee Schneringer. Schneringer’s standout play in her three varsity seasons thus far earned her a scholarship offer to the University of Alabama-Birmingham in June of 2018 which became official with her signing her National Letter of Intent Thursday, November 14.
“It’s her senior year, so we are going to go as she goes,” Mann said, “we expect great leadership and great plays out of Kylee.”
Schneringer’s expects more of the same from herself going into her final year.
“More scoring and more being a leader. Just trying to do anything the team needs,” Schneringer said.
Junior Mallory Oloffson could also prove to be a significant factor for the Lady Iron this season after starting nearly every game her sophomore year.
The 5’11” post player has been working on expanding her game this offseason for a system that “isn’t very reliant on bigs” according to Mann.
“I’ve been really working on my outside game, shooting more and getting more comfortable with my 15-foot jumper inside the perimeter,” Oloffson said.
Oloffson and the Lady Iron welcome the challenge of beginning their season with Intercity and playing for a title right away.
“It’s the best time of the year,” according to Oloffson because the Lady Iron compete with “all of our friends that we have been playing against since sixth grade. It’s just a really fun time.”