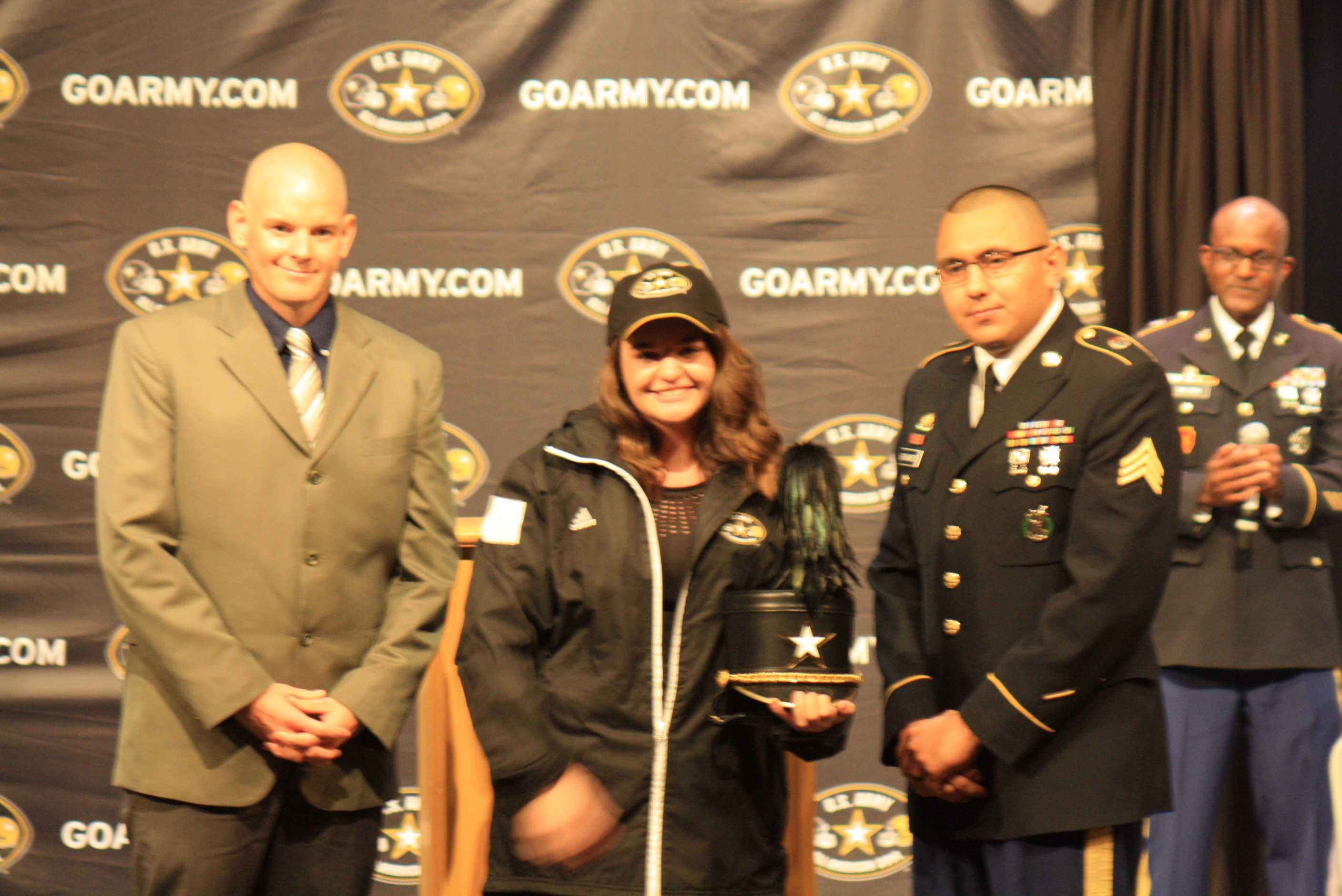 It is in this crowd that Normal Community High School senior Ashlyn Martin will be arriving this January.

Ashlyn, currently participating in her eighth competitive season as a NCHS guard member, has been selected to be one of only 24 color guard performers in the US Army All-American Marching Band. The All-American Bowl will be aired at noon on January 9, 2015, featuring Ashlyn and the rest of the Marching Band at halftime. This nationally televised event is performed after a week’s worth of non-stop rehearsal.

The US Army All-American Marching Band is made up of 125 of the most talented high school senior musicians and color guard members in the county. All of the performers are seniors, meaning that participants ideally have multiple years of practice. As the top performers in the United States, the performance level of the Army Band is expected to be difficult for even the best.

“The work that they are giving us is pretty hard,” Ashlyn said, “considering they have chosen the best high school colorguard members from across the U.S.A to do this performance.”

In order to find the top performers, the Army Band goes through a months-long auditions process. Each performer must send in multiple videos of them performing, along with a letter of recommendation, and signed parental forms.

“I had to send in 2 separate tryout videos,” Ashlyn said, “In the videos I pieced different routines from different shows together and came up with a routine to record.”

Over her years in guard, Ashlyn has had a number of coaches, but it was her current one, Hannah O’Flynn, that convinced Ashlyn to try for the Army Band. O’Flynn has coached Ashlyn for 3 seasons and thought that Ashlyn would be an exceptional candidate for the Army Band.

“I was actually a member of the U.S. Army All-American Marching Band in 2012,” O’Flynn said, “I told her about it, and a couple months later, we worked on her audition video.”

Ashlyn became captain during her third year of color guard along with her long-time best friend and fellow guard member, Melody Brewster. Both had been doing guard every year of high school and were regarded as the best.

“Based on my experiences, I would say Ashlyn is at the top of her class,” O’Flynn said, “I helped her with her choreography and filming, but she did all the work.”

Brewster can be credited with bringing Ashlyn into guard. Brewster’s older sister had been in guard and inspired the two friends to try out.

“I joined guard because my older sister did it before me,” Brewster said in an email, “It was so cool! I wanted to be apart of it!”

Brewster did everything with Ashlyn during their final year of junior high and decided together to audition for the high school color guard.

“Melody introduced [guard] to me when I was in 8th grade,” Ashlyn said, “At first I had no idea what it was, then I tried out and fell in love with it!”

The color guard as a whole won the Best Auxiliary, or Best Guard, award at all but 2 of their competitive performances this past season. The Normal Community Color Guard has proven to be full of talented performers, and each has the opportunity to succeed in the same way Ashlyn has.

“I think there are a lot of budding performers in this group that should audition when the time comes,” O’Flynn said, “I hope that after this year, band and guard members audition for the group.”

Ashlyn’s acceptance may be what other NCHS performers need to consider becoming a member of the US Army All-American Bowl and stepping off that bus into San Antonio. As said by O’Flynn, “All it takes is one person to open the door.”