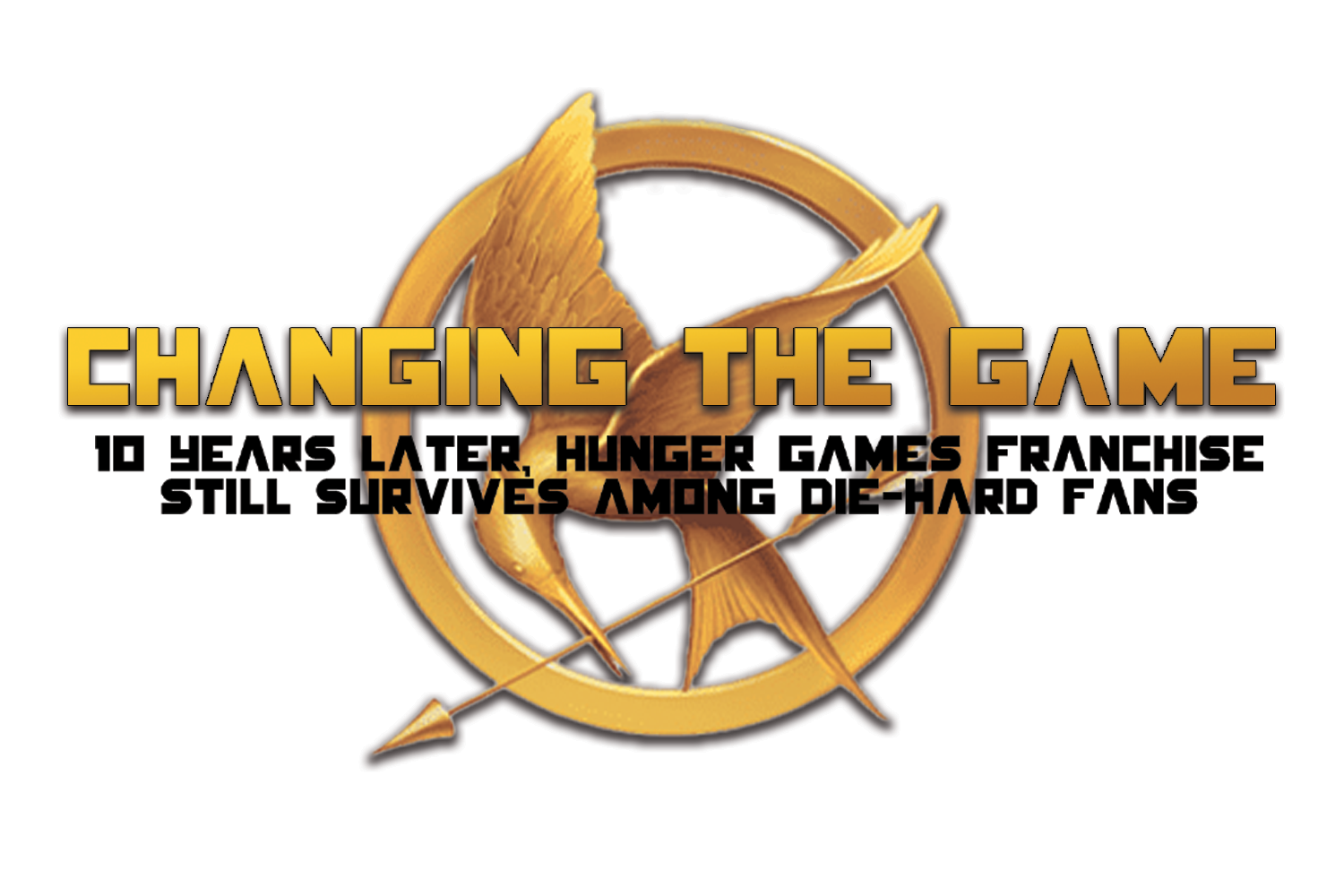 Every time Mr. Ricky King revisits the iconic Hunger Games franchise, these words fly into his head like one of Katniss Everdeen’s razor-sharp arrows.

The Community ESL teacher first watched “The Hunger Games” as a high schooler in 2012, and the adaptation of the 2008 bestseller was absolutely “mind-blowing.”

So mind-blowing that he bought the entire book trilogy the next day — and never looked back.

By the middle of 2012, 50 million others would make the same life-changing purchase.

Faster than Effie Trinket could say “may the odds be ever in your favor,” Suzanne Collins’ revolutionary tale of love, survival and rebellion became a worldwide sensation.

Fans raised their hands in three-finger salutes. Teenage girls debated over Gale Hawthorne and Peeta Mellark every afternoon at their lunch tables. Teachers incorporated aspects of “The Hunger Games” into their daily lessons.

Although March 23 marks the 10-year anniversary of the first Hunger Games film’s release, King and other fans will never forget watching Jennifer Lawrence “volunteer as tribute,” feeling like they were standing right there on the reaping stage of District 12 themselves.

“There are a handful of movies I’ve seen on screen that have made an impact on my experiences as a viewer,” King said, “and [“The Hunger Games”] is one of my top five films.”

The series wasn’t just about a revolution; it was a revolution. A literary and cinematic revolution that, like a select few Victors, has managed to survive a conflict-strewn decade.

Just as Katniss and Peeta saved each other countless times in the arena, “The Hunger Games” saved the dystopian genre among teens.

The novel revived the young adult dystopian craze incited by twentieth-century novels like “Lord of the Flies” and “The Giver,” allowing more recent favorites — “The Maze Runner,” “Divergent,” and countless others — to ‘catch fire.’

But the most revolutionary aspect of the franchise is its focus on a female protagonist — one who assumed the strong, heroic role that has traditionally belonged to males.

“I really liked that it started the path for having strong female leads,” Lilly McClelland (’23) said. “I feel like it’s turned into a cliché, but at the same time, that’s a really good thing.”

Ava Novack (’23), who “remember[s] not being able to put [the books] down” when she discovered them six years ago, said Katniss Everdeen was “one of the strongest female leads that [she] had ever read.”

Like those in the Hob, the Seam, who still remember the Dark Days, King sees the Girl on Fire as “relatable.”

“We can kind of parallel our experiences to hers,” King said, “and we can empathize with her as a character overall.”

Lily Garcia (’24) put it more simply: Her favorite character is “Katniss… because she’s a baddie.”

Not the series’ only “baddie,” though.

With dozens of unique tributes, “The Hunger Games” has given fans an array of individuals to admire and criticize. McClelland enjoys the “funny and bold” contributions that Johanna Mason of District 7 made to the series.

For Pranathi Ganti (’24), Prim Everdeen is the series’ strongest character for her “integrity” and willingness to take care of her family while Katniss was in the arena.

And after reading the Hunger Games book series’ most recent installment, a prequel titled “The Ballad of Songbirds and Snakes,” King had a new favorite character: President Snow.

“Collins does a really good job of making you hate and love…President Snow in [“The Ballad of Songbirds and Snakes”],” King said.

Of course, there are some characters that fans wouldn’t be so eager to sponsor in the arena.

Novack feels that Katniss’ relationship with Gale was “forced” and that “it wasn’t meant to be a love triangle,” while Ganti prefers Gale.

Peeta, Ganti said, was “too nice.”

Some, like McClelland, don’t care for either love interest.

“Peeta would help [Katniss] get through everything with the capital and whatnot,” she said. “And Gale… he helped the family or whatever. But neither of them are very good options… they’re both toxic people.”

“The Hunger Games” didn’t spend five consecutive years on the NYTimes bestseller list for its romance.

Known for repopularizing the dystopian genre among teens, the series offered a bleak reflection of the modern world that young adult authors would mirror for years to come.

McClelland watched the first movie before she was old enough— age 12— to be drawn for the Capitol’s annual Reaping, and she remembers that she “didn’t understand the deeper meaning.”

As McClelland’s matured, though, “it took a total darker turn.”

“It was supposed to be reflective of our current society,” McClelland said. “As I’ve gotten older, I’ve been able to analyze and comprehend that a bit more.”

King has loved this aspect of the Hunger Games books and movies from the beginning.

“The thing I like most about ‘The Hunger Games’ is… its ability to be this dystopian world that doesn’t exist, yet exhibits characteristics of our world.”

The franchise’s influence is so worldly, in fact, that King uses components of “The Hunger Games” to teach his ESL History class. Many of his students enter the class familiar with the books, which have been translated into 52 languages.

“Right now we’re finishing up the Vietnam War,” King said. “When explaining the draft to some English Language Learning Students, [I ask] who’s read ‘The Hunger Games.’ The draft is kind of like the tribute selection process. Making those comparisons is something I’m able to do more often than not.”

The books aren’t the only part of the Hunger Games franchise that has seen global success, either. In 2012, the citizens of about 50 nations scrambled to theaters for the first movie’s release.

In 2022, the films are still a staple in fans’ movie rotations.

King has rewatched the movies eight or more times. Ganti once binge-watched the entire series in two days. McClelland, whose uncle worked on the computer-generated imagery for a scene in “Catching Fire,” often turns on the movies when she needs something to watch.

Although McClelland’s uncle sometimes comments on the films’ cost-inefficiency, the $495 million spent producing these fan favorites did not go to waste.

Countless readers and viewers— from tribute-aged twelve- to eighteen-year-olds to adults older than Caesar Flickerman— are forever changed by the series.

Lauren Hirsch (’23), who “wasn’t much of a book reader” before diving into “The Hunger Games,” said the books altered her perspective on reading altogether.

Novack, an avid reader who has now revisited “The Hunger Games” three times, said the book trilogy “set the foundation for [her] reading,” too.

Readers like Ganti love the series’ messages about “courage, bravery, and sacrifice.” Ganti said the books “speak a lot to kids in this day and age,” and the plot constantly leaves young readers pondering the question, “What if this happened to me?”

10 years later, she and other Hunger Games lovers are still asking questions like this one.

10 years later, fans still find a reason to ease a casual “I volunteer as tribute” into everyday conversation.

10 years later, enthusiasts like King are still thinking about how they felt the first time Katniss Everdeen entered the arena.

“[‘The Hunger Games’] was the first dystopian that I had seen on a big screen,” King said. “It was mesmerizing to see, so it holds a special place in my heart.”