A monotone bell rings, echoing across the empty halls. Suddenly, doors fling open, and the decibel level rises as students pour from every door. Yells between students rise like fog over a bay in the morning, each one trying to overpower the other. They pierce the madness like a foghorn, telling of how badly someone failed a test, or how much PE sucked today. The sea of students sits at high tide. Shuffling through this mass feels like wading in waist-high water. Surely, wherever the destination of this stream lies, they will not arrive on time. Not in these numbers. Stairs? Don’t even bother. Which side of the stairs does down-going (or up-going) traffic go? It doesn’t matter, no one is moving.

Simply put, there are too many students in this school, a result of high school students being unevenly distributed throughout the district. 2,090 students flood the halls of Normal Community compared to Normal West’s 1,689. But the issue is larger than just one school having more students than another. While Community does have more classrooms than West, 87 classrooms against West’s 80, the distribution is off. Assuming all of NCHS’s 87 rooms are used in a given hour, and that the number of students is evenly distributed that’s an average of 24 students per class. At West, assuming the same for 80 classrooms, that’s only 21 students per classroom.

There is an overall population difference of 400 students between the two schools. In order to provide enough room for those 400 students to be in classes of 21, the average size of classes at West, Normal would need 99.5 classrooms. Half classrooms don’t exist so this needs to be rounded up to 100. To evenly distribute the district’s high school students, NCHS needs 13  extra classrooms. When the district’s mission statement is to “educate each student to achieve personal excellence”, how can Unit 5 provide these unequal educational experiences for its student population? How does Unit 5 expect to see similar results with differing procedures? That’s just high school science, baby.

With students spilling over the brim, the proximity of students is also creating problems. Prof. Charles K. Tanner from the University of Georgia has done extensive research in ways to improve student productivity. Tanner’s studies show that an NCHS-sized classroom (on average 765 ft2) should house only 10 students plus 1 teacher (see here). His research shows that too crowded of a classroom can reduce productivity, because students are uncomfortably close, as well as “excessive stimulation”. While 10 students per class may be a pipe-dream, Normal is filling classrooms (on average) over twice the recommended limit. Feel crowded yet?

To solve this, Unit 5 needs to begin plans for a third high school, possibly by lookin 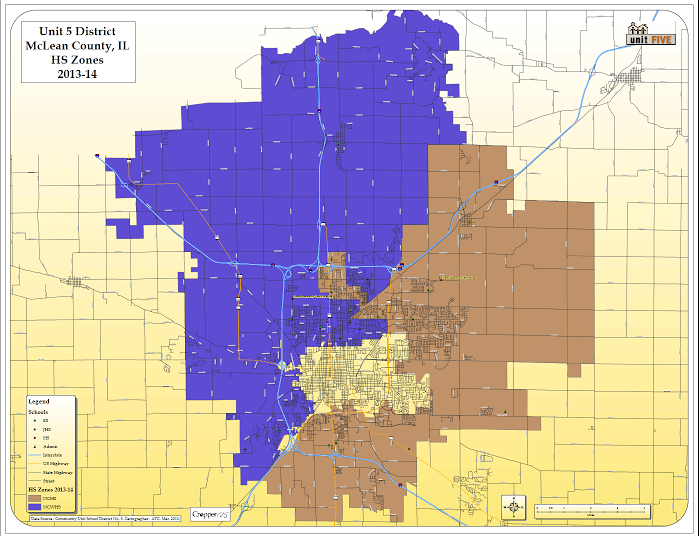 g at places in most need. The southern part of town, where Crestwicke and the Meadows are, could be a possible site. That area has students traveling all the way across the town with an average commute of 25 minutes (see image). With Unit 5 having a shortage of buses and drivers, shaving down the commute time would be a no brainer. This would reduce the strain on buses traveling all the way from the Unit 5 transportation facility to the southern part of town, all the way back to either high school.

This could be a potential source of revenue for the district as well – renting out the school’s auditorium and pool like what is currently being done at both Community and West. Having a third high school would improve student performance, since the stress and stimulation of too many students in one classroom would be diminished, if not erased.

Surely, we don’t need to send students even farther from a school closer to them, just to arrive in an overcrowded, stagnant facility. Leaving the schools uneven puts unnecessary strain on one school, while another is underpopulated. Crowded schools reduce students’ productivity, which looks especially poor on the school, as well as the district. This overflow only gets worse as long as we let it leak over.