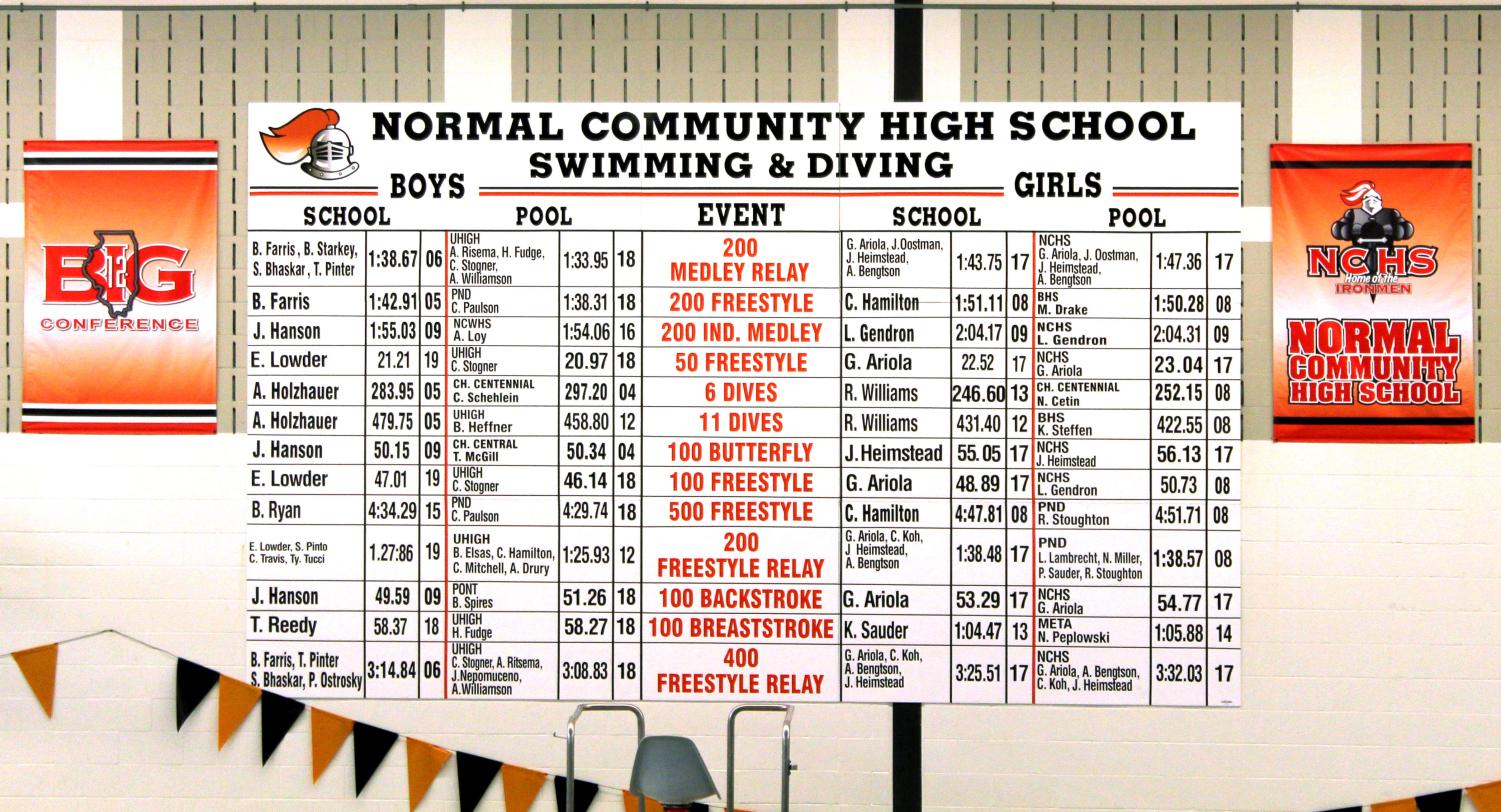 As the cold water splashed onto her face, Julia Heimstead took a deep breath and went back into the water for the last time in her high school career.

Heimstead has set multiple school records, will be swimming collegiately and competing in the US Nationals as a result of her competitive nature.

“I’m never satisfied with where I’m at, I continuously looking for ways to get better,” Heimstead said.

Heimstead’s hard work and persistence has played a key role in her athletic success.

“She spends a lot of time in the pool, she trains very hard all year long in addition to the high school season,” girls swimming coach Heather Budak said, “just her passion and her focus certainly help to bring her success.”

Over the course of her high school career, Heimstead has “loved each and every year on the NCHS team.” From being a freshman that learned “what being an Ironman meant,” to “being the best leader [she] could be” as a senior, Heimstead has grown through her time in the program.

Her sophomore season, 2017-18, stands out to Heimstead in particular. The best team in school history, the Lady Iron placed fourth at state that season, in addition to winning the Intercity Tournament, Big 12 Conference, and an IHSA Sectional. Heimstead describes herself as being “so lucky to be apart of [that season] and share it with [her] best friends.”

That season, as a sophomore, Heimstead placed 9th at state in the 200-yard individual medley, and 2nd in the 100-yard butterfly, as well as being part of the 3rd place 200-yard medley relay and state runner-up 400 freestyle relay teams.

“It is especially hard to stay motivated when you have a bad race or meet,” the Arizona signee said.

Despite the fact that staying focused can be tough at times, “having teammates to lean on is key and knowing you always have something to improve on,” said Heimstead.

Having that support system helped her be able to break her own school record in the 100-yard fly twice throughout her high school career. Another key source of motivation and support has been her parents, who Heimstead described as her “biggest fans.”

This season, after winning Sectionals in both the 100-yard fly and 200-yard IM, she qualified for state with both events.

“We were really thrilled with her outcome at the state meet. The competitive atmosphere at State is really beyond compare,” Budak said.

Beyond getting on the podium, Heimstead’s favorite part of the sport she’s loved since she was five is the people she has met and the places she has traveled to. She’s made connections throughout the country, and said that “through camps and college visits, I have made so many lifelong friendships.”

Splashing into the future, Heimstead will be swimming at the University of Arizona next fall. When describing why she picked U of A over a plethora of other suitors, Heimstead said that she “loved the coaching staff [at Arizona] from the start,” noting that “they saw my potential.”

She is confident that the program will help her reach her goals, which include finaling at the NCAA National Championships and earning points for the Wildcats at the PAC 12 Conference Championships.

For Heimstead, “always setting new goals after achieving one is important for growth.”

“Strangely, one of Anya’s biggest obstacles this season was peanuts,” Mr. Brandis Heffner, girls diving coach, said. It may sound funny, but Heffner was serious.

Anya Weber (‘20) had to overcome an allergic reaction on two occasions throughout the season, which prevented her from attending multiple practices. However, she was able to “bounce back and finish 2nd in a really close meet” after experiencing a reaction “just two days before our conference [tournament],” Heffner added.

Although the outside factors and physical aspects can be challenging at times, getting over the mental bounds can be what sets an athlete apart from the rest in such close contests.

“You have to convince yourself the training can be worth it,” Weber said.

After practicing for hours on end, in an effort to enhance the quality of each dive, perfection has been Weber’s goal all season.

“Anya has this year spent the year really focusing on perfecting her dives, and making each one a little bit better,” Mrs. Heather Budak, said.

“She approached every meet with a goal in mind, and if she didn’t accomplish it, she would come into the next practice determined to fix her mistake,” Heffner said.

In conflict with her calm demeanor, Weber has an intensity that radiates off of her in the pool that others cannot help but notice.

“Anya always has a strong desire to succeed and loves to win,” said Heffner.

Although Weber has faced disappointment, she is not one to back down but is rather determined to fix her mistakes next practice.

“Even in some of her record-breaking performances, she would be unhappy with a dive or two and that drive would lead her to even more success later on,” Heffner said.

Weber positively uses her frustration as fuel to keep a confident attitude. Her tenacity has resulted in self-growth during her diving career.

Through the rough waters of the season, “Anya’s mental game grew a lot,” according to Heffner.

While there were meets where Weber lost to competitors who she could have beaten, she used those as “great learning opportunities to build resilience and mental toughness,” said Heffner, adding that “Anya was able to avenge her losses [at State] and beat all but one girl who had beaten her during the regular season.”

Though she ultimately fell 0.6 points short of advancing to the second day of the State meet, Weber has enjoyed a very successful senior season, including a record-setting performance that got her name on the board above the NCHS pool.

Anya’s diving accomplishments might be considered “nuts”, considering that her aquatic career began six short years ago. After soaking up every second of her time in and out of the water, she is ready to open the door to the next chapter in her life.