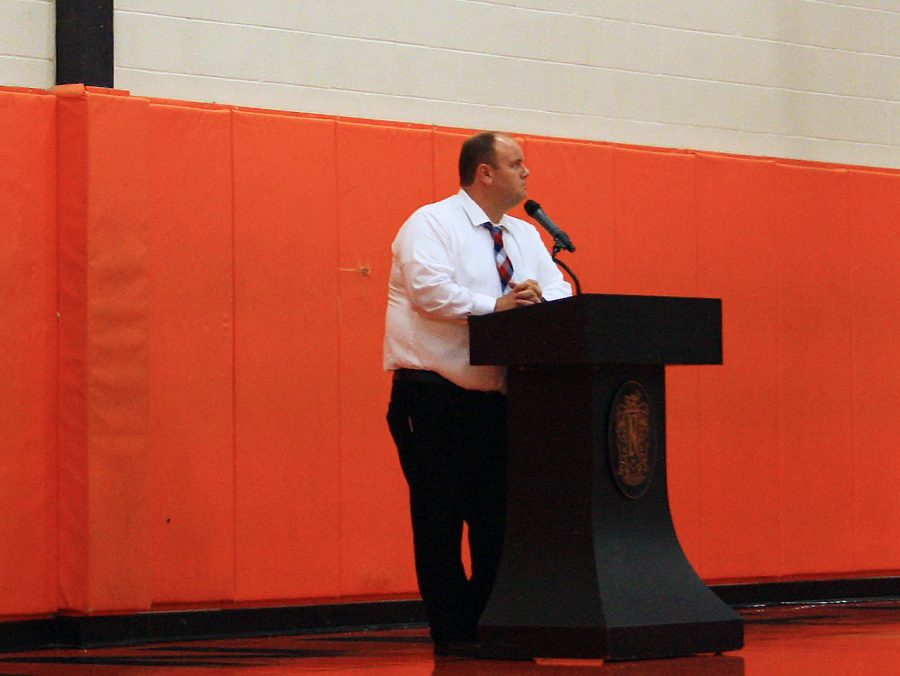 Mr. Trevor Chapman plans on making modifications to how NCHS operates as a first year administrator at Normal Community High School, but Chapman intends balance. While he will implement changes to some of the processes and procedures around the building, Chapman wants to preserve aspects of the old administration throughout the following school year.

A new principal means new changes to the school, however some traditions at NCHS will remain the same as Chapman, moving from the same role at Evans Junior High School, starts the year.

Orange Crush is one of the beloved traditions that will continue to reward students with orange soda for honorable behavior every Friday morning. Before transitioning to his role as principal at NCHS, Chapman conducted a survey of the teachers to determine what changes they would like to see and what they would like to see remain. Chapman said that the crushing was something teachers supported across the board.

Chapman, an administrator for 6 years before being hired at NCHS, understands that teachers and students both want to keep certain traditions, Orange Crush dates back before Mr. Dave Bollmann’s time as principal, it was a staple when Dr. Jeanette Nuckolls held that role.

Chapman did say he felt a little odd and uncomfortable when making the first weekly crush announcement, however, he is confident that down the line he will start to enjoy the weekly crushes just as much as the students and faculty.

When a new principal enters a school, it’s the students who are directly affected by the change. Prior to working at Evans, Chapman taught business at West for 7 years, where he had hands on experience working with students and teachers on a day to day basis,  Chapman feels because of this he understands and “can communicate with high schoolers.”

Trenton Burns (12) is “excited to see how he is going to support our school teams” as the school year progresses.

Normal Community High School students believe Chapman supports music. There is one program in particular that has been recognized by the new administration, the NCHS marching band.

Chapman said in an interview with the Inkspot staff that as a former high school band member himself, he likes to stop by the band room to listen to the music.

Chapman is working to improve the communication between the staff and the administration at Normal Community High School.

Since his arrival Chapman, a Google classroom has been put into place for teachers, sharing important documents and information, and a weekly newsletter is sent out to staff.

“A lot more information is provided to all of the teaching staff,” Ms. Sarah Boezio, second-year business teacher, said.

Along with the new forms of communication, Chapman advertises an “open door policy” where teachers can come by his office anytime to talk or ask questions.

Mr. David Feeney, a 19th-year English teacher said, Chapman “realizes that teachers are on the ground level… that we’re the ones interacting with the students everyday” and Chapman does a good job listening to teachers and helping them with what they need.

However there are still a few things Feeney would like to see changed, “it seems like we are heading down a path where more and more of our classes are being regulated.”  He wants to see “blanket rules” taken away and more discretion given to teacher concerning tests and lessons.

Behind the scenes, Chapman has worked with teachers and support staff to help identify students that are “internalizers”, a style of introverted learner, and to accommodate these learners in a system that often focuses on group activities and social interaction.

Chapman, working with Mr. Paul Krogmeier, was part of the initiative to rebrand the former Academic Support Center (A.S.C) to The Forge and to staff the resource center with peer tutors after school.

Along with the academic changes, the visibility in the school, the new forms of communication, staff meetings have a different feel, more light hearted, “he kind of makes fun of himself,” Ms. Jill Frazier, 13-year math teacher, said.