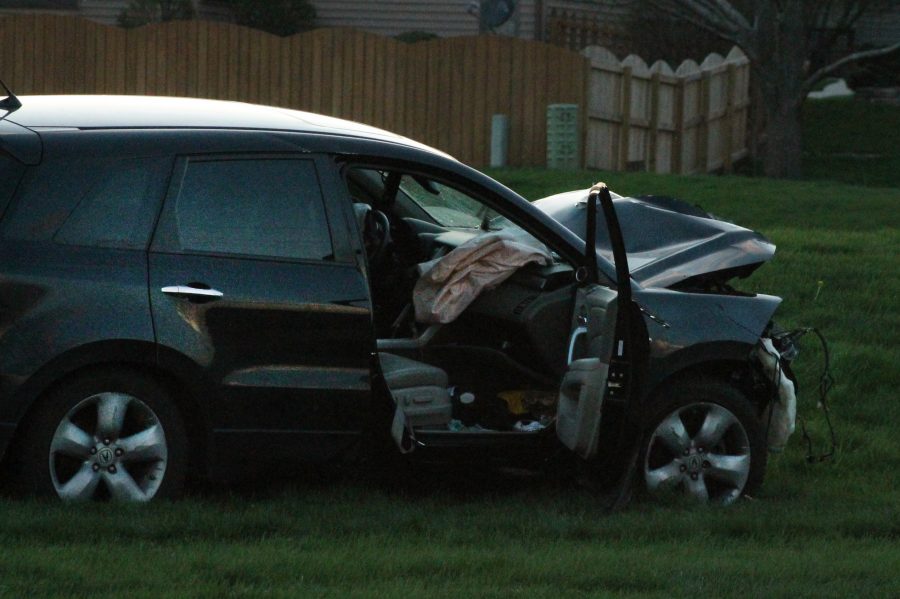 Brewster’s car after the accident.

A vehicle, driven by Joshua Brewster, crashed into a utility pole at the corner of Airport Road and College Avenue this past Monday, April 10 around 5:00 PM. Brewster’s wife, Melonie, along with their three children, ages 4, 3, and 2, were also in the car.

Although the accident was not fatal, it was not without its consequences as some of passengers of Brewster’s vehicle required hospitalization. The crash also caused many residents in the surrounding neighborhoods to lose power for about an hour because of the damage to the utility pole.

Rhonda Hargrove, a resident of Bloomington, passed the intersection shortly after the accident occurred. She states, “I saw a small car with the front end severely damaged sitting up in the grass… it had struck a large utility pole and snapped it in half.” According to her account, before authorities arrived witnesses were helping tend to the passengers in the car, and were also helping to avert traffic.

Brewster was arrested on “initial charges of aggravated DUI causing bodily harm, DUI involving drugs, reckless driving, failure to reduce speed, improper lane usage and endangering the life and health of a child less than 18 years old,” according to the Pantagraph.

Along with his current charges, Brewster has arrest warrants in Washington, Idaho, Arkansas, Florida, and Texas. Authorities are also investigating a financial fraud that Brewster may be involved in.

After the initial hearing on Wednesday, April 12, Brewster is scheduled to return to court on April 21.