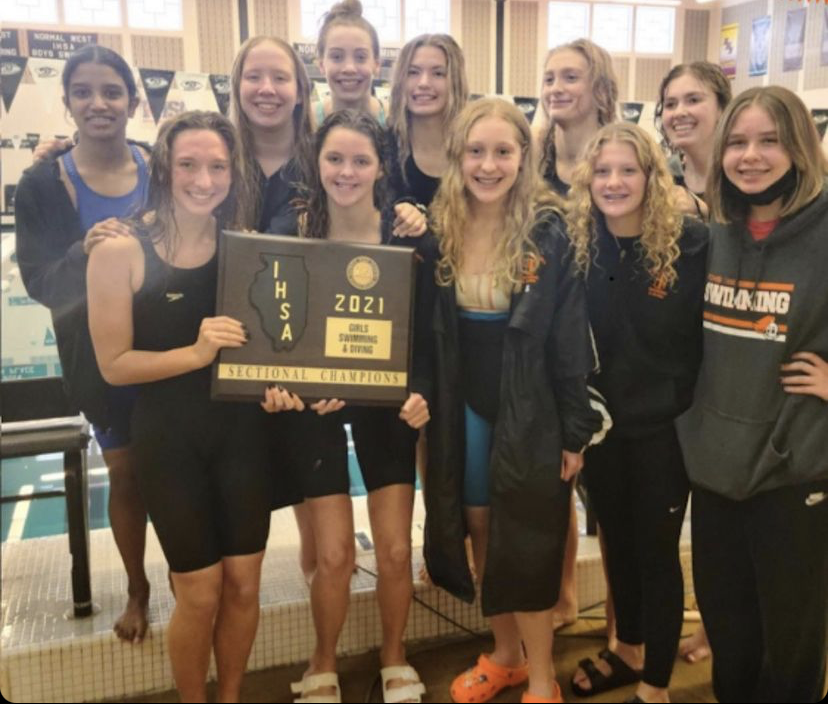 For the second time in school history, the Community girls swimming and diving team won the IHSA Sectional meet on Nov. 6, advancing four swimmers to the IHSA State meet in four events.

Community finished Sectionals with a team score of 269 points, 43 points ahead of second-place U-High, winning the competition for the first time since 2017.

The 2017 team, Coach Heather Budak said, had one of the best swimmers in the state in Grace Ariola leading the team. This year, Community won their Sectional without a state-ranked swimmer on the team.

“If you looked at the heat sheet going into the Sectional, we weren’t favored to win,” Budak said. “We ended up winning by almost 40 points. So it was a really great team effort that they had.”

The team of Malinowski, Osborne, Kilcoin, and Harr took first in the 200-yard freestyle relay with a time of 1:40.04, with the first-place finish automatically advancing the relay to State.

Malinowski finished the 50 freestyle in 24.32 seconds, 0.98 seconds ahead of the second-place finisher.

Malinowski’s 100 freestyle time of 52.46, .2 seconds behind U-High’s Olivia Haerr, qualified her for the State meet based on time. Malinowski finished .4 seconds under the qualifying benchmark.

Also qualifying as an individual was junior Nina Osborne. Osborne won the 500-yard freestyle with a time of 5:10.06.

Budak, Sectional Coach of the Year, attributes the team’s success at Sectionals to their accomplishments throughout the season.

“Knowing that they had beat West, [won] Intercity, and the Big 12,” Budak said, “really gave them momentum.”

The team finished in the top five in every meet this season, including the competitive United Township and Richwood invites.

“It’s hard to know what’s going to happen at the State meet,” Budak said, because swimming is a single class sport, and “we haven’t seen all of those swimmers we don’t know we don’t get films.”

Heading into State, the team’s only goal: swim as fast or faster than they did last weekend.