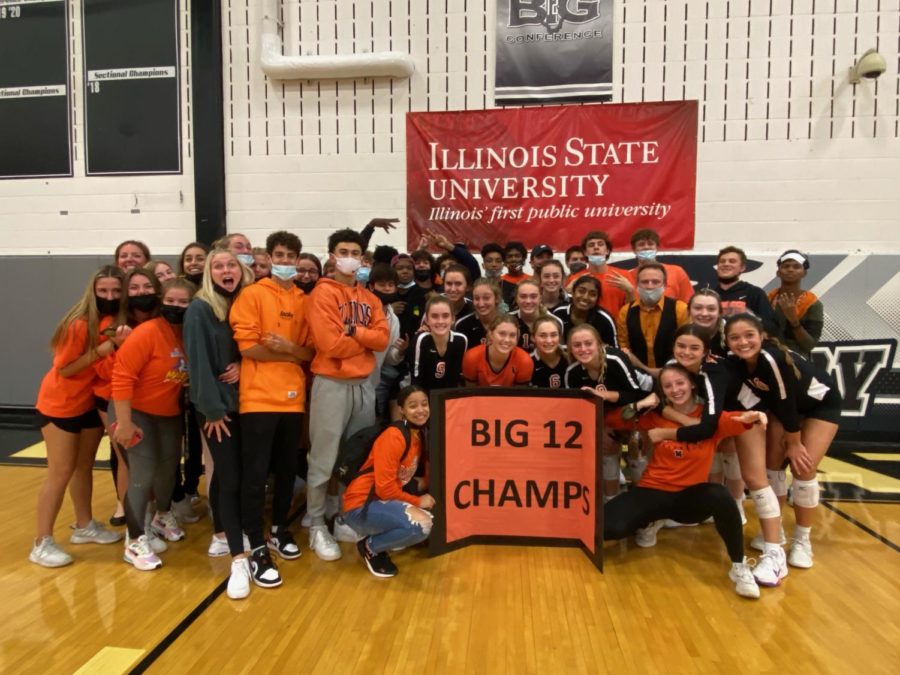 The implications of the matchup between Community and West’s volleyball teams were clear well before the Oct. 19 competition: Tuesday night’s winner would take home the Big 12 Conference title.

Heading into the teams’ final regular-season matchup, the Lady Iron and Wildcats sat undefeated atop the Big 12 Conference standings with 9-0 records.

For most of the season, West held a slight advantage over Community, as they did not lose a single set in conference play. Community dropped one set to Peoria Richwoods on Sept. 28.

West’s conference play perfection continued through the first set of the Conference title match, as the Wildcats ran away with a 25-19 victory.

Community responded by handing their rivals their first — and second — conference losses of the season, earning the Lady Iron their 3rd consecutive Conference Championship.

Libero Isabelle McCormick (’22) said that “finishing points” on “free and down balls” was a focus for the team after losing the first set to the Wildcats.

In the second set, the Lady Iron battled in a back-and-forth match, winning 26-24.

Early in the set, Community had a four-point lead over West. The Wildcats clawed back to tie the score at 17-17 before taking a 20-19 advantage over the Lady Iron.

The two teams were tied at 22 apiece and traded points before the Lady Iron ultimately won the set.

Outside hitter Kate Kraft (’22) predicted the match would be “very competitive” and said that having a “strong mindset would be important.”

Community and West were tied 9-9 before the Lady Iron took a 17-14 lead in the third set.

It was a flipped script from the matchup between the two rivals earlier in the season. At the Intercity tournament, the Lady Iron won the first set 25-14 before losing the next two sets by 2 points each.

“We need to finish a match when we have the opportunity,” Head Coach Christine Konopasek said after the loss against West in Intercity.

Kraft helped Normal Community do just that, tipping a set from Sophia Feeney (’23) over the net to clinch the third set.

Feeney led the team in assists with 23. A team, Feeney said, that was “super energetic before the game. We all talked about how badly we wanted to win.”

Kraft and McCormick anchored the Lady Iron defense with 10 and nine digs, respectively. They were tasked with defending 6’2’’ Northwestern commit Averie Hernandez, who McCormick called “a great player.”

“We tried to keep her in the back row as much as possible,” McCormick said. “We were serving aggressive[ly], which made them not go through rotations. We did block her a couple of times which definitely was a momentum change on the court.”