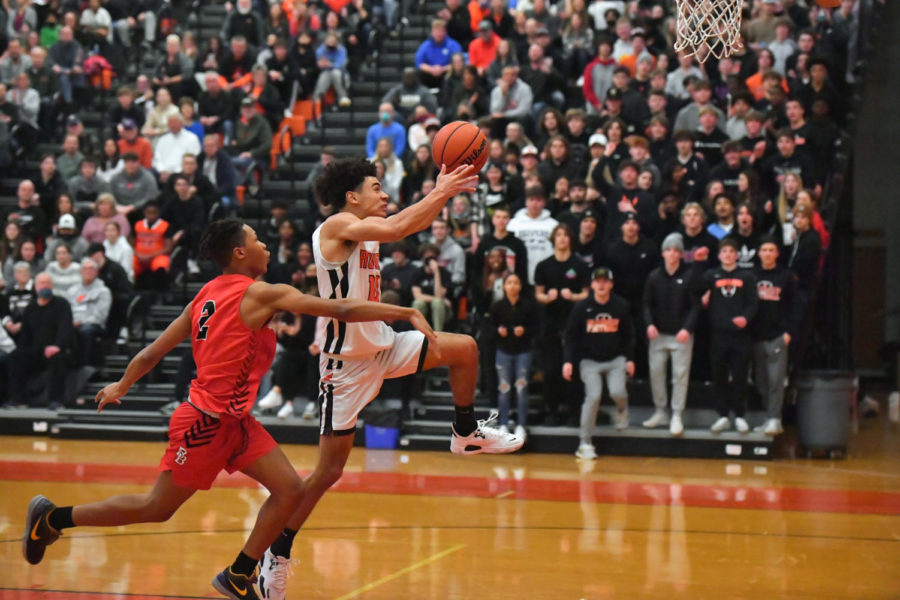 The Ironmen (33-1) boys basketball team advanced to the Sectional Finals with a decisive 61-44 victory over the Moline Maroons (28-5) on March 1.

The Ironmen used defense to generate offense early in the first quarter, jumping out to a 7-0 lead with a Crofton Perry (’22) triple, a Zach Cleveland (’22) dunk and a Trey Redd (’22) layup all coming off of Moline turnovers.

The Maroons responded with a 7-0 run of their own to tie the game.

The rest of the first half was all Community as the Ironmen defense clamped down on the Maroons, allowing just 6 more points.

Community took a 27-13 lead into the break after Braylon Roman (’24) scored the final five points of the half.

The Ironmen maintained a healthy lead throughout the second half, with Moline only pulling as close as eight points at one point in the third quarter.

Trailing 41-28 entering the fourth quarter, Moline began a full-court press, a decision that led to a series of slams for the Ironmen.

A Cleveland one-handed dunk, which sent the Iron Invasion into a frenzy, came off a leap that began just in front of the free-throw line and stretched the lead to 45-29.

Just minutes later, Cleveland, who recorded 10 points and 9 boards, rocked the rim again on a lob from Redd and the Ironmen led 50-34.

The next two Ironmen dunks came courtesy of Jaheem Webber (’24), who scored 12 points and pulled down 8 rebounds.

Redd led the team in scoring for the second straight game, tallying 15 points.

Moline’s offense was anything but balanced, as point guard Brock Harding accounted for over half of the team’s scoring with 28 points.

Harding’s scoring does not tell the entire story of his performance, though.

Even when the ball was not in Harding’s hands, the Maroon offense revolved around trying to get him open, leaving Perry and Brent to fight through screens all night long.

The defensive effort paid off, as Moline’s 44 point performance was well below their season scoring average of 76, sinking just 39.1% of their shots.

With the victory, Community returns to the Sectional Championship for the first since finishing as the State runner-up in the 2014-15 season, as they face Quincy (27-5) on Friday, March 4 in Collinsville.