Community returns to the Sectional Championship for the first time since 2005, taking on Edwardsville 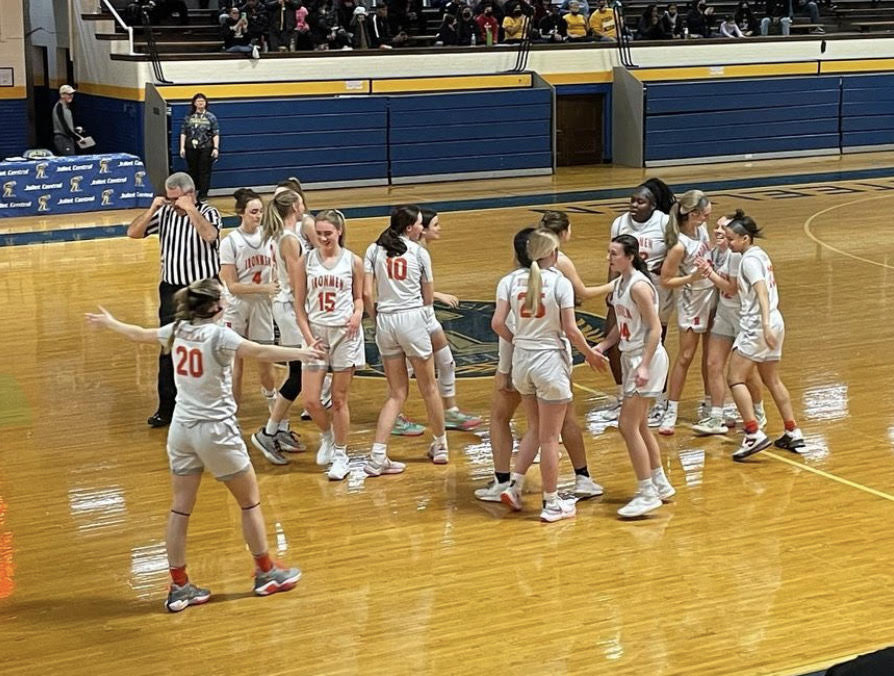 The last time the Lady Iron competed in the IHSA Sectional Championship, half the current roster wasn’t even born yet.

Tonight Community returns to the Sectional Championship for the first time since a 2005 victory over Champaign Central as the Lady Iron play the eighth-ranked Edwardsville Tigers (27-4).

While a lot has changed since the last time the Lady Iron competed for a chance to advance to Super-Sectionals, one thing is the same – Coach Dave Feeney is calling the shots from the sidelines.

The Lady Iron defeated Joliet West 66-35 in the Sectional Semifinals on Tuesday, Feb. 22, avenging a 70-63 late-January loss to JWHS in blowout fashion en route to the Sectional Championship.

Feeney attributed the monumental difference in outcome between the matchups with Joliet West to two factors.

“We knew going in the first time [to play Joliet West] that there was a good chance that we were going to face them in the Sectional,” Feeney said. “We kind of told our team, ‘We are going to play and obviously we want to win, but we are not going to show them the whole arsenal.’”

An injury to Joliet West’s All-State guard Lisa Thompson contributed to the Iron victory, as Thompson missed most of the Sectional Semifinal with an ankle injury.

Community capitalized on Thompson’s absence and “pressured them into a lot of turnovers,” Feeney said.

Community’s defense has led the team to four-straight victories by 27 points or more while they have held opponents to an average of 29 points per game over that stretch.

Edwardsville’s Sydney Harris will put the Iron defense to the test, as the Central Michigan-commit averages over 23 points per game.

Feeney believes containing Harris and rebounding against the Tigers’ size are the keys to victory and advancing to the Elite Eight.

The Lady Iron do not have an individual putting up the same offensive numbers as Harris, but Feeney credits the collective offensive effort and ball movement for making the group “really hard to guard.”

Beyond a ticket to the Super-Sectionals, a win would tie the school record of 28 wins in a season.

While Feeney said that fact isn’t lost on his team, the current focus is solely on Edwardsville.

“They are going to demand every ounce of our attention,” Feeney said.

The winner of tonight’s 7 p.m. matchup will play at Illinois Wesleyan’s Shirk Center on Monday, Feb. 28 at 7 p.m.