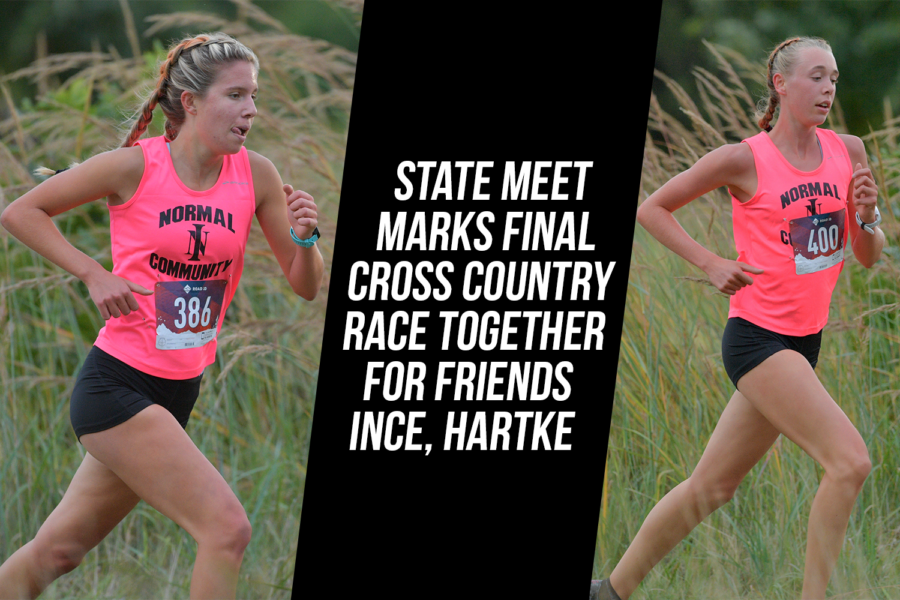 Ali Ince and Olivia Hartke first ran cross country together when Ince was in the 6th grade and Hartke in the 8th -- this season's State meet marked the final time the friends would race together.

When sophomore Ali Ince and senior Olivia Hartke raced at the IHSA girl’s State cross country meet on Saturday, Nov. 6 it marked the last time the pair would compete at Peoria’s Detweiller Park together.

Since junior high, Hartke has served as a distance running mentor for Ince.

“I’ve… looked up to her since sixth grade,” Ince said. “She taught me to be a positive person and really enjoy the sport.”

Running for Kinglsey Junior High in the 2017 3A IESA State cross country meet, Ince and Hartke crossed the finish line with identical times — 11:54.9.

This season, Ince finished 32nd in her first State competition as an Ironmen — posting a season-best time of 17:30.

“There were a lot of people to cheer you on, so it was a good environment,” Ince said. “Just to get…to run [against] the fastest people in the state was a great opportunity”.

“I’m definitely going to miss all the memories, the people, the coaches — just the sport as a whole,” Hartke said

Cross country coach Ms. Amy Scott is sure that Ince will miss running with Hartke.

“They are two peas in a pod,” Scott said, “They’re distance run training partners; they just compliment each other so well.”

Scott, who has known Ince since the sophomore was born, isn’t fully convinced that with her work ethic and natural speed, Ince needed a role model.

“I helped to organize [Ali’s] baby shower when her mom was expecting,” Scott said, “but Ali is very fast, and she’s always in a hurry. She came prematurely and was born the day we were supposed to have [the] shower.”

Whether Ince needed a mentor or not, the two runners’ relationship can’t hurt.

Hartke, Scott said, was an essential part of the cross country team; her graduation will leave a “big hole,” performing consistently as one of the team’s top runners during the last four years.

“It’ll be a major loss to our team. Our coaches are going to be devastated,” Scott said. “We’re going to miss her [Hartke] terribly.”

Running state alongside Ince, Hartke said, “was a perfect end to our whole [running] relationship.”

“Ali and I are like sisters,” Hartke said. “We’ll stay in touch.”

Next season’s cross country, running without her mentor for the first time,
“will be definitely sad not to be on the starting line with [Hartke],” Ince said.

“That’ll be tough because honestly, other than a teammate,” Ince said, “she really is my best friend.”