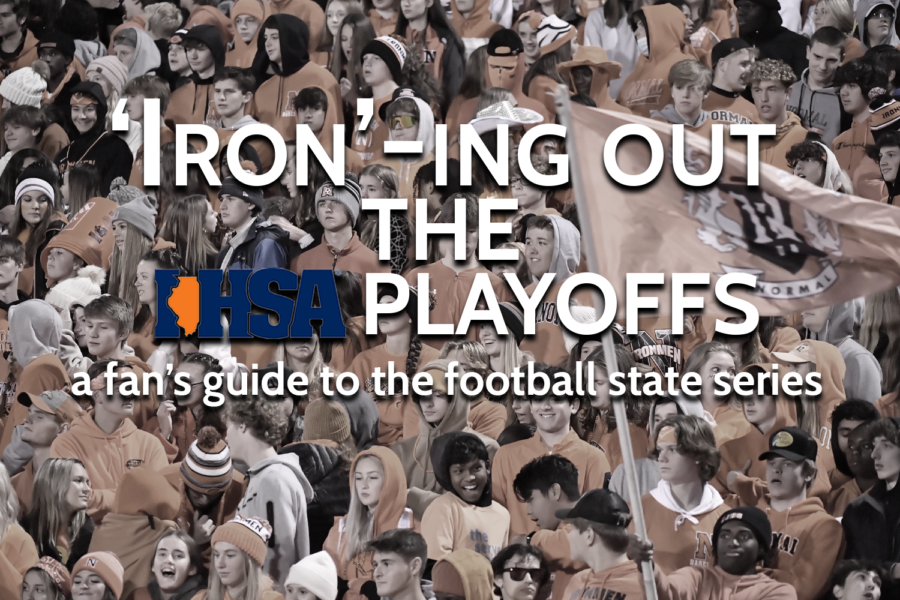 After closing out an undefeated regular season with a 45-7 victory over rival Normal West on Oct. 22, the Ironmen earned the third seed in the 7A State Playoffs. The team faces 30th-seed Blue Island Eisenhower (5-4) in first-round play on Oct. 29 at Dick Tharp Field.

The IHSA’s postseason structure, from Final Fours to Super-Sectionals, can confuse the uninformed and unfamiliar.

Here’s a rundown of what football fans need to know heading into this year’s playoffs: how the tournament structure works and the Ironmen’s recent postseason track record.

Selection
IHSA football postseason is the only postseason tournament in which teams qualify based on regular-season records, according to the organization’s website.

Of the 450 playoff-eligible teams statewide, 256 teams advance to the playoff’s opening round.

Each conference’s champion and teams with a 6-3 record or better automatically qualify for the postseason.

The remaining teams with the best records (often 5-4) earn the unfilled playoff berths.

In the event of a tie, strength-of-schedule determines which teams advance.

Once the IHSA determines the 256 first-round teams, those teams are sorted into 8 equal classes of 32 based on school enrollment.

In each class, from 1A to 8A, teams are seeded from 1-32 by regular season record and then strength-of-schedule.

Homefield Advantage?
If they continued to win, Community would be seeded higher than their opponents until the playoff Semi-Finals. Despite the higher ranking, the Ironmen would not necessarily host each game.

After the first round, the team with the least number of playoff home games hosts the matchup.

If teams have played the same number of home games, the higher seed earns the home game.

For instance, if Community defeats Blue Island, the Ironmen take on the winner of the Jacobs (19)/Hersey (14) matchup. If Jacobs defeats Hersey, Community travels to Jacobs in the second round since the Ironmen had hosted more games than Jacobs.

With a Hersey wins, however, the Ironmen would play host for the second straight week.

Heading North
If Community travels, the path to the championship game at Northern Illinois University’s Huskie Stadium most likely includes a trip to the suburbs.

Only one team south of Normal qualified for the 7A postseason, 7-seeded Collinsville, and only three possible opponents are schools outside of Chicagoland (Pekin, Moline, and Rockford).

Familiar Foes?
None of Community’s 2021 opponents are in the 7A class, though three rivals qualified in a different class.

History of the 3-seed
Since 2015, the 3rd seed of the 7A tournament played in the Championship game twice, exited in the third round twice and the second round once.