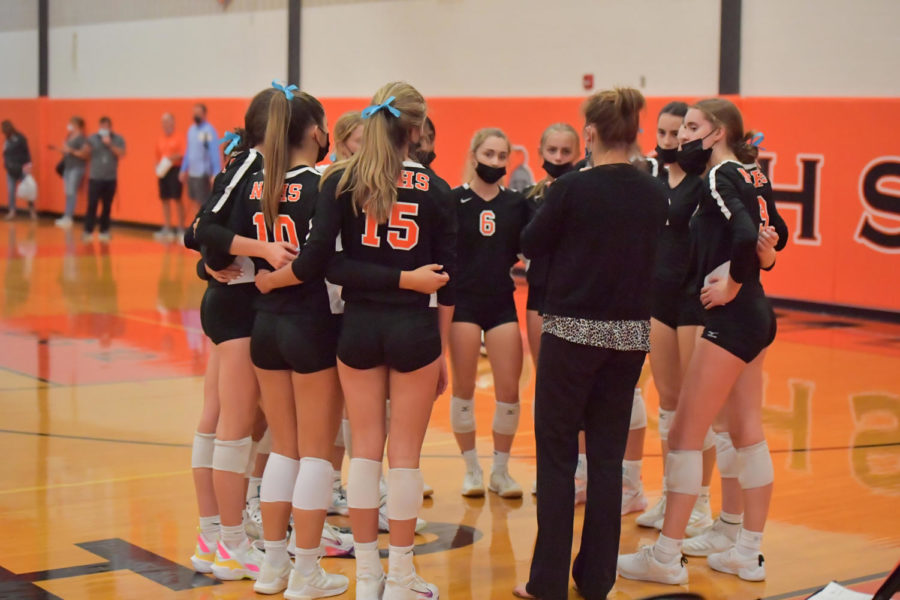 The Lady Iron came up short of an Intercity Title but are neck and neck with Normal West for first place in the Big 12.

After falling to Normal West in the annual Intercity Tournament on Sept. 25, the Lady Iron will have Oct. 19 circled on their calendars — the next meeting between the crosstown rivals.

The Intercity battle between Normal Community (19-6; 7-0) and the Wildcats (20-3; 7-0) would ultimately decide the tournament champion, and although Intercity is non-conference play, it provided a preview of the Big 12 Title race.

After starting the day with a victory over U-High in two sets, the Lady Iron faced off against Normal West, winning by 11 in the first set.  A margin of victory which surprised 12th-year head coach Ms. Christine Konopasek.

“The first set was kind of a fluke,” Konopasek said. “Normal Community and Normal West don’t play each other in sets that are 25-14.”

The second and third sets were more typical of the rivalry. They were “hard fought,” Konopasek said, with the Wildcats winning both in nail-biting fashion with scores of 29-27 and 27-25.

“I think we had three game points,” Konopasek said. “We need to finish a match when we have the opportunity otherwise it will … slip through our fingers.”

Following the loss, the team “could have played very flat and kind of resigned [them]selves,” Konopasek said. But the Lady Iron bounced back, needing only two sets each to notch victories over Central Catholic and Bloomington to close out the tournament.

Konopasek highlighted several of the team’s leaders, among them outside hitter Kate Kraft (`22.) Kraft recorded 30 kills and 10 aces over the course of the tournament.

Setters Sophia Feeney (`23) and Olivia Price (`24) “run our offense,” Konopasek said. “They don’t really have the option, they have to be in the leadership role.”

Feeney and Price combined for 88 assists during Intercity.

McCormick racked up 41 digs from the libero position in the four games against area teams on Sept. 25.

Normal Community has gone 7-1 since Intercity, defeating conference foes Peoria Richwoods, Champaign Central, and Urbana and posting a 4-1 record at the Belleville tournament on Oct. 2 and 3.

The match at Normal West on Oct. 19 will be the final regular season game for the two Unit 5 high schools, who both sit atop of the Big 12 standings.

Normal West is 3-0 since Intercity and has yet to lose a set in conference play.

Senior Kate Kraft expects the teams’ next matchup to be “very competitive” but if the Lady Iron work hard and “play cleanly,” she said, they can beat the Wildcats.

Both teams have “an opportunity to take home the conference title,” Kraft said, “so it will be very important for us to be focused and have a strong mindset.”