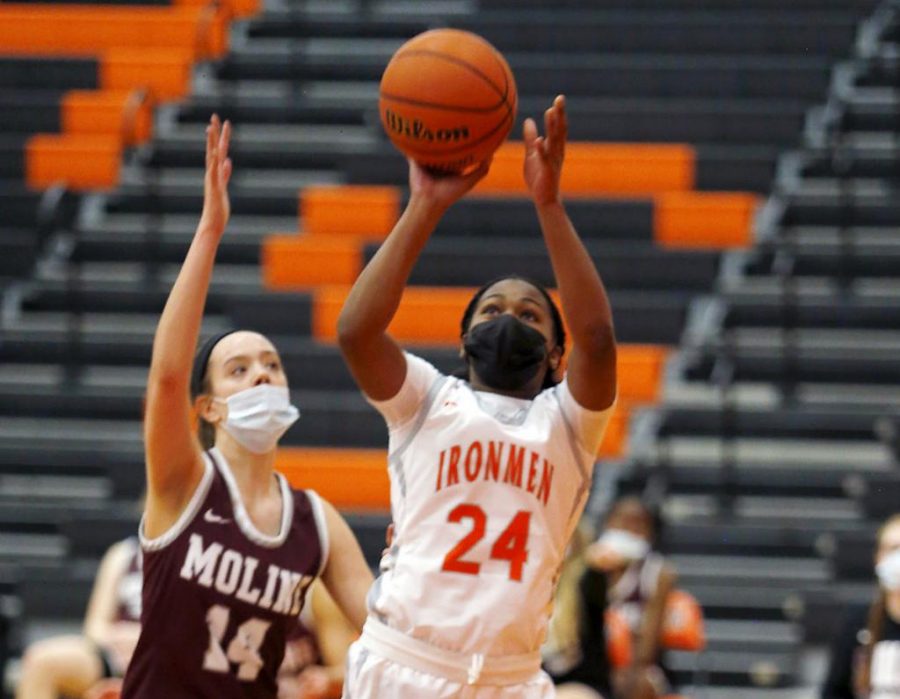 Briana Mathews, who scored eight points against Moline, pulled up for a jumper under the hoop.

Despite trailing the Moline Maroons heading into the fourth quarter, the Lady Iron varsity basketball team opened their season with a 59-42 comeback win on their homecourt Saturday, Feb. 6.

While the home opener opponent “was really tough,” head coach Mr. Dave Feeney said, “our kids showed a ton of toughness to respond.”

Three-pointers from Lady Iron’s Karleigh Creasey (’22) and Mallory Oloffson (’21) resulted in a 27-21 halftime lead by the Maroons.

Led in scoring by Ivie Juarez’s (’22) 12 points, the Lady Iron cut the Maroons lead to two points in the third quarter. They brought home the win after showing “a lot of competitive will” in the fourth quarter, Coach Feeney said, crediting Oloffson and Creasey for doing “a great job on Trice defensively.”

Offensively, Oloffson and Creasey each contributed 10 points, while Mathews scored eight, leading to a 17-point win.

Even with one game under Moline’s belt for their ’20-’21 season, they did not have an edge over Normal Community at the free-throw line. The Lady Iron outscored the Maroons 21-5 at the line as they drained seventy-five percent of their free throws.

“I was really impressed by how our kids responded to a really tough start in our first game,” Coach Feeney said.

The Lady Iron followed their team motto, “tough and together,” as they combined their efforts on both sides of the court to gain offensive ground. Not only did Creasey secure eight rebounds, Juarez and Madison Feeney (’21) pitched in seven and six, respectively.

Creasey and Oloffson both pitched in ten while Mathews brought in eight and Madison Feeney seven, resulting in a 17-point win.

“I thought we fought back really hard and never gave up,” Oloffson said, adding that the Iron now know what to expect and can learn from their mistakes with their first game out of the way.

The Lady Iron will take on Peoria Manual for their Senior Night on Wednesday, February 10, a game that marks their first conference competition of the season.