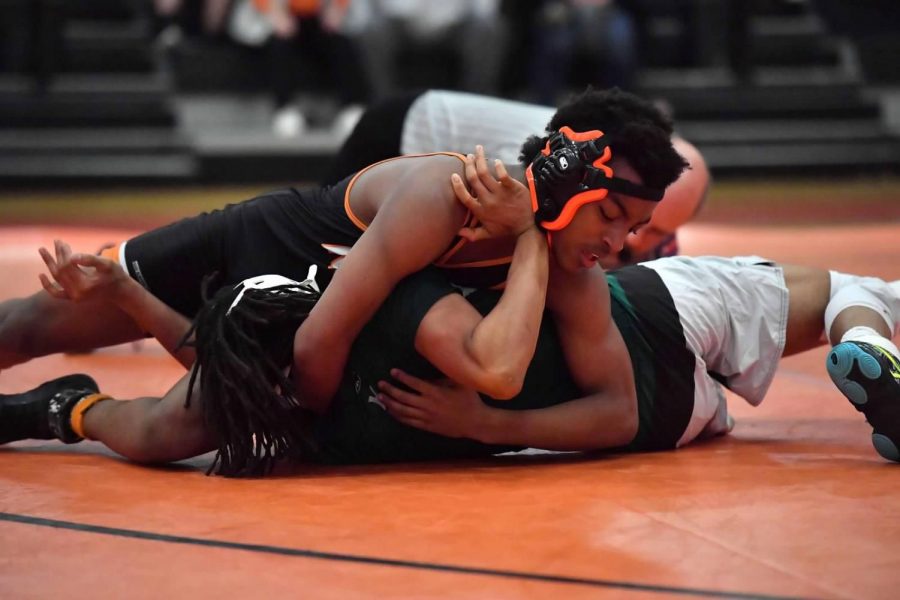 File photo: The 2020 winter wrestling season is currently rescheduled to begin during the IHSA summer season.

Before IHSA Executive Director Craig Anderson’s Nov. 19 announcement that “all high school sports and activities will cease by November 20 for … a short-term pause” low risk winter sports were set to open their seasons Nov. 30.

The decision regarding the higher risk winter sports of boys and girls basketball were left to individual school districts to decide, while the wrestling season was moved from the winter season to the summer, running April 19 to June 26.

The wrestling season was rescheduled due to the Illinois Department of Public Health considering it “high-risk,” since competitors are in close quarters with each other for an extended period of time.

Mr. Nic Kearfott, NCHS Athletic Director, said that the decision was made in hopes that there would be a vaccine introduced by April. “If not,” Kearfott said, “then at least we won’t have to worry about cold weather.”

Safety protocols will be implemented to protect athletes and coaches, including answering COVID-19 screening questions, precautions such as taking temperatures before visiting teams enter competitor facilities, and disinfecting equipment between matches.

Despite these protocols, Unit 5 is not without concerns. The Athletic Department considered the legal effects of holding the wrestling season: “Is our insurance company going to still cover us?” Kearfott asked. “If they don’t, now we have huge liability on our backs.”

Hosting Spectators at indoor events is a challenge all athletic programs have faced this year. Kearfott said having fans indoors likely won’t happen due to CDC guidelines.

But depending on COVID-19 numbers, according to head wrestling coach Mr. Trevor Kaufman, hosting summer tournaments outdoors could be a possibility this year. “I think that’d be something different that we could do to help the sport grow a little bit because you can have some more fans in the stands,” Kaufman said.

“We really push multi sport athletes,” Kaufman said. “A lot of [wrestlers are] kind of bummed because we do have a lot of baseball, track, and football players.”

Sophomore Jordan Campbell is opting to sit out of the wrestling season this year due to COVID-19 concerns.

“For the time being I just don’t think there will be enough safety measures in place to ensure the safety of all the athletes that will compete,” Campbell said.

For Athletic Director Kearfott the toughest part of these decisions has been “the uncertainty of everything, things continue to change daily.”

But for Kaufman, his struggle has been with the fact that not every athlete comes from the same background. “You just worry about your athletes, that use [wrestling] as a kind of outlet to excel and for scholarships,” he said.

Despite the obstacles Kaufman understands that “there’s a bigger picture here.” Even though wrestling is an important aspect of his life and his athletes, “we’ve got to understand it doesn’t always come first . . . we have to adapt because there are bigger things in play.”