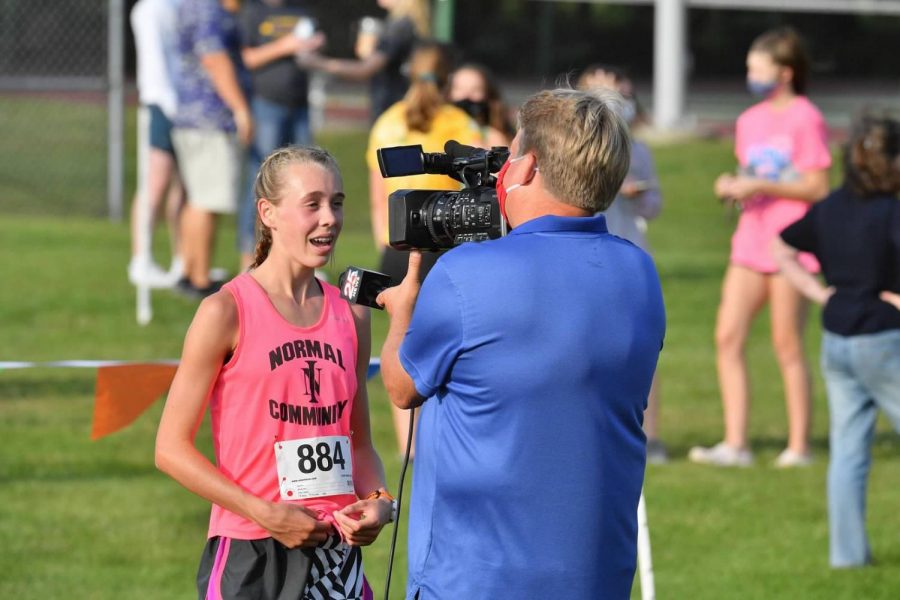 Ali Ince speaks to Channel 25 News about her performance and experience winning the Randy Sharer Intercity cross country meet. The meet held at Maxwell Park Tues, Sept. 22 was renamed to honor the longtime Pantagraph reporter who covered cross country and track before his retirement.

The Lady Iron cross country team heads into Saturday’s Peoria Notre Dame Invitational amidst a historic season. A Normal Community girls cross country team, since 1979 when the IHSA records began, has never finished the season among the state’s Top Ten teams. A feat which rivals — the U-High Pioneers — have accomplished 12 times since 1993, most recently finishing 4th in the state at the 2A level in 2018 and 4th at the 1A level in 2019.

But the 2020 cross country season is one of a lot of firsts for the 3A Lady Iron, as varsity runners are currently ranked 24th in the state by MileSplitIl. Of the 25 top 3A teams, NCHS is the only school ranked from outside the greater Chicagoland area.

Because of the “firsts” of the 2020 season, the Lady Iron are deserving of recognition.

Another first in over a decade occurred when the varsity runners secured back-to-back intercity titles. Until 2019, U-High had dominated the intercity cross country race — winning nine consecutive meets.

A first-place finish by freshman Ali Ince in this year’s newly renamed Randy Sharer Intercity race helped start a stream of NCHS’s own. With wins in 2019 and 2020, the team secured consecutive victories in a meet that NCHS hadn’t otherwise won since 2007.

Wolters was vital in the Pioneer’s State success in 2018 and 2019; Ince could find herself playing a similar role among the Lady Iron in the future.

Olivia Hartke — who’s season has been impacted by an iron-deficiency– finished 5th at the Randy Sharer Intercity race; Lauren Sanderson (’21); Liberty Harmon (’21); and Abigail Ziemer (’24) contributed to the intercity win, placing 9th, 10th, and 12th respectively; while Anna Sewell (’21) and Annika Luthe (’23) finished in the top 15 as well.

The 2020 cross country season will be historic for the Lady Iron for another reason – it is one without a State Final race at Peoria’s Detweiller Park.

Traditionally, the top 5 teams from each Sectional would advance to the State competition. This year, however, the Sectional serves as the last opportunity for teams to compete.

After initially announcing that the cross country season would end with Regionals, the IHSA Board of Directors announced on September 23 the addition of a second round of postseason play.

“Despite the challenges of this school year, our Board has remained committed to providing the most rewarding postseason experiences possible,” said IHSA Executive Director Craig Anderson in a press release.

At this season’s end, the Lady Iron will not have a chance to experience the ultimate reward – the opportunity to compete for Top Ten at a State Final. Under head coach Tom Patten, the Lady Iron have qualified as a team for the State Final 11 times since 1992, but just once in the last decade.

The 2020 NCHS cross country team seems designed to be Coach Patten’s 12th Lady Iron squad to compete for a State title – but instead, the season will end unceremoniously after the Sectional meet on Oct. 31.

The Peoria Notre Dame Invite and Big 12 Conference Meet on Sept. 17 offer the Lady Iron a chance to race at the state venue – Detweiller Park – without the possibility of State honors. But Detweiller, with its hills and inclines, has always been a challenging course. If the 2020 Lady Iron have shown us anything — it is that through adversity, they find a way to finish first.