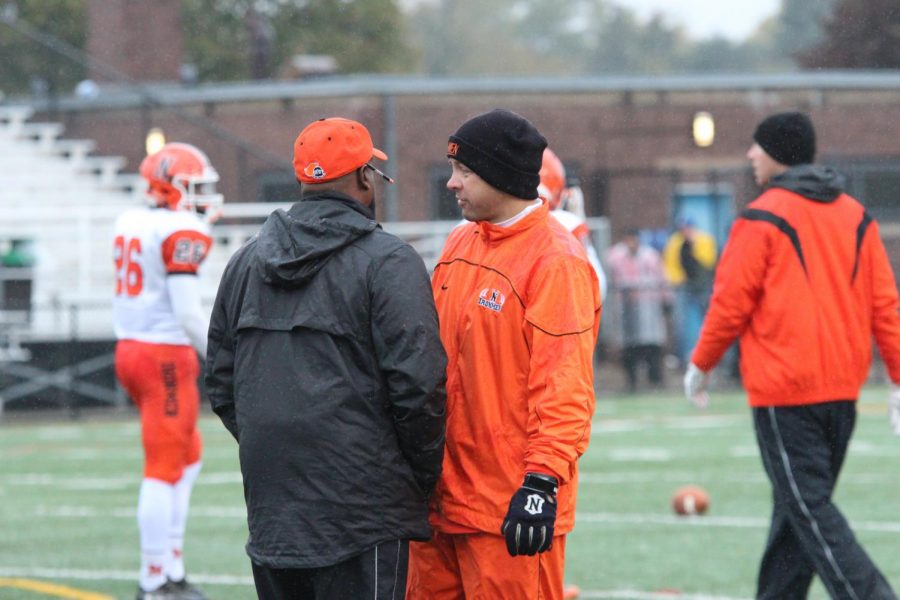 Mr. Wes Temples confers with Mr. Bryan Thomas before his final game as head coach against Mt. Carmel High school on Nov. 14, 2017. Temples most successful season as a head coach came with an appearance in the State Quarterfinals in 2015.

Former Ironmen head football coach and current physical education/driver’s education teacher Mr. Wes Temples has been hired as the next athletic director of Normal West. Temples will be replacing Mr. Stan Lewis, who is retiring at the end of the school year.

Athletic director has been a goal on Temples’ mind since he left coaching after a 10-1 season in 2017. Temples’ tenure as head coach spanned 10 years and resulted in an 83-25 record.

After completing his master’s degree, Temples achieved his goal by accepting the role at Normal West. His drive to become an athletic director has come from a number of places.

“While I was coaching, I had the privilege to work with some great people,” Temples said, “the Andy Turner’s of the world.”

Mr. Andy Turner worked as the athletic director at Normal Community for 11 years before taking the same job at Maine South High School in 2016. Turner hired Temples as the head football coach when Temples was 28 years old.

“The impact he had on me — teaching, helping, listening, always guiding — it’s something I’ve always remembered,” Temples said.

Another inspiration for Temples is his family — both his father and uncle were athletic directors and holding the title is somewhat of a family tradition.

The former head coach will be going into the next chapter of his career with open eyes, looking to take it all in.

“I don’t think you go into these jobs trying to leave your mark on something,” Temples said. “I want to go in and make a difference, but I’m not going to try and define something like ‘this is the way West wants it done.'”

There are big shoes for Temples to fill when he takes over on July 1 for Stan Lewis.

“Stan has done such a tremendous job and has been such a huge asset for the school,” Temples said of his to-be predecessor.

He plans to fill those shoes by looking out for and fulfilling the needs of those suiting up to take the court, field or track for West.

“I want them to know I’m on their side; I’m here to help. Any way I can make the experience for the student-athletes at Normal West better, I think that’s my role,” Temples said.

One of the most common questions Temples has had to field since accepting the position: Who are you going to be rooting for when West plays Community?

After all, Community is where he spent nearly two decades in the physical education department, the school his daughter currently attends…

His love for both schools keeps him impartial.

“[There are] unbelievable memories here, great people here, people that mean so much to me here. One night a year in each sport, it’s going to be difficult, but you know all those other nights, you wish nothing but the best for both schools.”

With the right mindset in place, Temples is set for success, even if it’s on the other side of town.