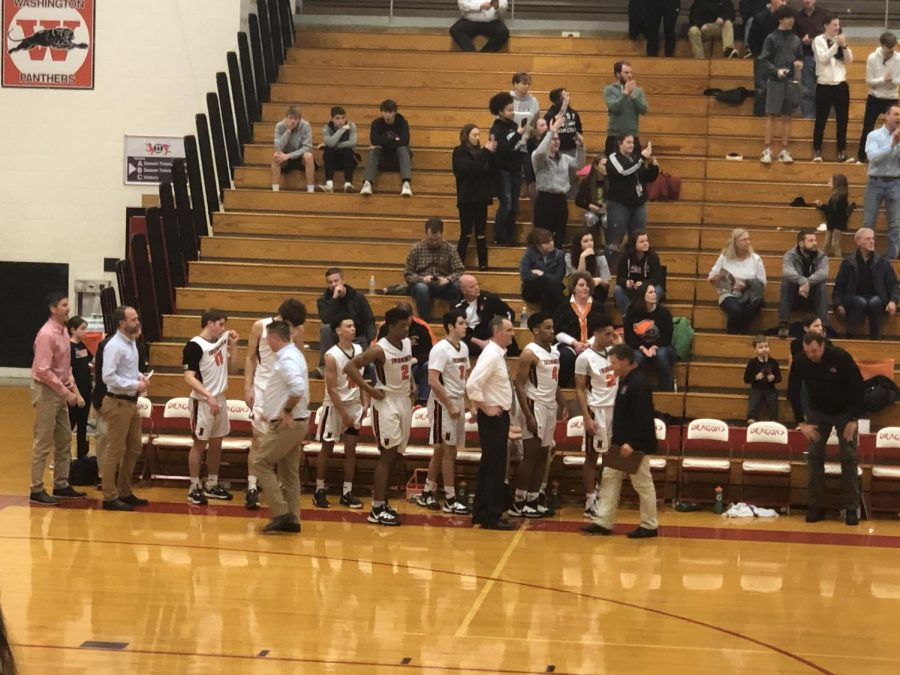 A disappointed Ironmen bench watches the final minutes of the Sectional Semi-Finals loss to Normal West.

The Ironmen defense was out of character in their Sectional Semi-Finals matchup versus Normal West, allowing 62 points in their season-ending loss to the Wildcats. Junior guard Nick Rediger’s career-high 18 points helped West beat the Ironmen 62-47 in Pekin, advancing to play Collinsville in the Sectional Championship.

Rediger did not play in either of the previous meetings between the Unit 5 rivals earlier in the year, but the Ironmen knew he could be dangerous going into the matchup.

“On our scouting report we had him as a shooter,” said sophomore guard Trey Redd, “He just got wide open shots and we did a bad job of closing out.”

Sophomore forward Zach Cleveland led the way for Normal Community with 16 points and 12 rebounds. Cleveland played limited minutes in the second half due to foul trouble, which also forced him to face the burden of playing without fouling down the stretch.

The Ironmen were held to eight points in the first half, finding themselves down  20-8 at the break.

“We came out slow,” Redd said, “They started making all their shots and we couldn’t do anything.”

12 of those first half points came from West’s sharpshooter Alec McGinnis on four three-pointers. McGinnis added two points in the second half to finish with 14.

West answered with a five-point swing powered by Rediger and senior forward Cole Hernandez, putting West up 52-42 with only 2:31 remaining, seemingly putting the game out of reach for the Ironmen.

A number of desperation shots refused to go in for NCHS, and the Wildcats put the game away with the help of their 20/25 shooting performance at the foul line.

With the season ending, five seniors have played in their final game for Normal Community.

“Obviously it was a little hard when you’ve been playing against [West] for the past four years with the same guys,” senior guard Mitchell Sauder said, “I felt like we did all we could and it just came down to us having to play them.”

The Sectional Championship will be held at Pekin and tips at 7 p.m. Friday night.