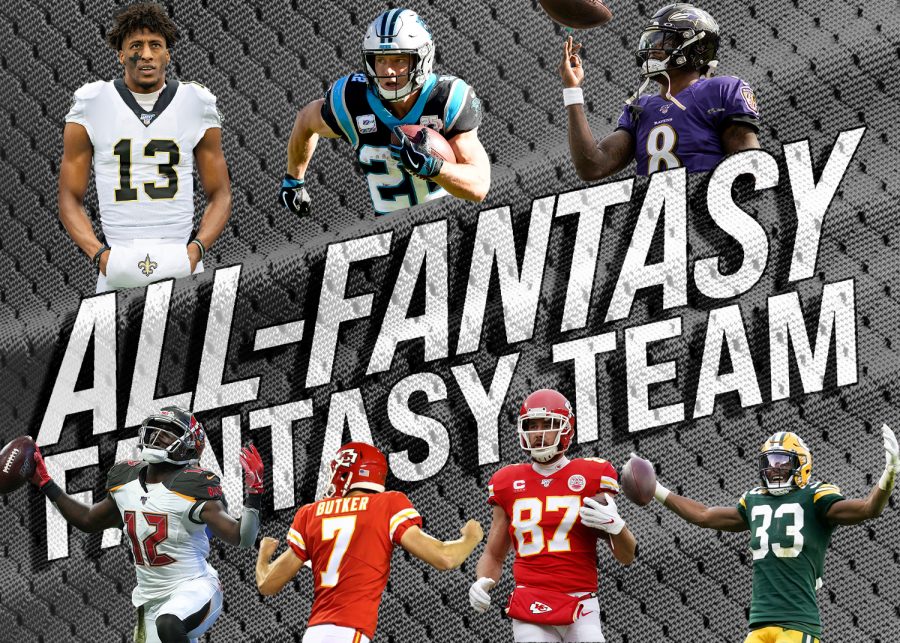 The dust has settled after a fierce fantasy football season. League champions have been crowned, bets have been lost, and pride has been squashed. The Chiefs 31-20 Super Bowl victory serves as a reminder that the new Fantasy Football season is a long six months away. In the meantime, here is a look back on the team that could have been. The Inkspot played Monday morning quarterback, building a roster of the best overall players by position from the 2019 season. Using ESPN’s standard scoring format, this fantasy – fantasy team would have surely trampled opponents on their way to an undefeated season.
Quarterback
Starting at the quarterback position: Lamar Jackson of the Baltimore Ravens. Jackson averaged 27.7 points per game, six points more than the next closest quarterback Dak Prescott. While Jackson only had one under-20 point performance, Prescott had six games under 20 points. With Prescott, scoring was feast or famine. Jackson, however, was consistent week-to-week.
The Ravens’ QB’s highest-scoring game came Week 15 against the New York Jets, where he put up just over 37 points.
In total, Lamar had 415.68 points, which was second in the league right behind running back Christian McCaffery.
Running back
Clearly starting at running back and the best overall fantasy player in 2019 was the Carolina Panthers’ Christian McCaffery. McCaffery went from averaging 24.1 points last year to averaging a league-high 29.5 points per game.
McCaffery’s highest-scoring game came against the Jacksonville Jaguars in Week 5 where he had 47.7 points, the third highest-scoring performance of the fantasy season.
McCaffery was one of the most consistent running backs this season, only having two games where he scored under 20 points compared to the eight games he scored over 30.
Wide Receiver
The top wide receiver in fantasy football this year was Micheal Thomas. The Saints’ wideout led all fantasy receivers with an average of 23.4 points per game.
Thomas’s highest-scoring game came Week 5 against the Tampa Bay Buccaneers, where he scored 41.2 points.
Thomas led the league in targets at 185, which elevated his value in points per reception leagues. In leagues with yardage bonuses, Thomas’s combined talents of big-play threat and possession receiver only improve his value.
In the second receiver slot was Tampa Bay Buccaneer Chris Goodwin. Goodwin averaged 19.7 fantasy points per game with his best fantasy performance coming against the Los Angeles Rams, where he scored 41.2 fantasy points.
Goodwin, in a position that can be hit or miss in fantasy, offered consistency. Goodwin only recorded two games with under 13 points. While Atlanta’s Julio Jones could also have been a name a fantasy owner would have been happy to have on their roster, Jones posted five games under 13 points, and his highest-scoring game didn’t match Goodwin’s.
Tight End
Kansas City’s Travis Kelce was the top tight end in fantasy football this year despite George Kittle’s performance for the 49ers. Kelce and Kittle both averaged 15.9. But Kelce did so while playing in every game this season. Consistency is key in fantasy football, and Kittle’s two-game absence was felt by owners that had come to rely on the San Francisco TE.
Kelce’s highest-scoring game came in Week 15 against the Denver Broncos, where he scored 25.2 points; his lowest-scoring game was against Las Angeles Chargers Week 18, where he had 5.4 points. Kittle’s 3.4 in Week 13, paired with his missed games, are what set Kelce as the TE of the 2019 fantasy season.
Flex
Drafting the flex position, a position filled by either a wide receiver or running back is often up to personal preference. League format and the number of league members complicate the position as well. Projects as the 15th best available RB during preseason polls, Green Bay’s Aaron Jones logically could have been on draft boards in the 2nd or 3rd rounds of some drafts.
Besides averaging 23.4 points a game, Jones had 10 or more carries in all but one game this season. Touches are essential when it comes to RB performance. Roger’s had explosive potential, another quality needed in the flex position, posting three 30+ point games. Rogers’ best game was against the Dallas Cowboys in Week Five, where he scored 49.2 points.
Defense/Special Teams
While not the most exciting of positions to draft, the defensive/special teams spot can be a fantasy game-changer. With the possibility of a negative-point performance, the defensive/special teams position can be make-or-break any given week.
The New England Patriots defense takes the cake this year, averaging a league-high 14.1 points a game. New England’s highest-scoring game came Week 2 against the Miami Dolphins, where they scored 35 points.
More importantly, the Pats remained positive each week. Their worst performance, also against the Dolphins, was a 1 point game. Other considerations, the 49ers, and Steelers, each posted a negative point performance this season. For the cliche of “defense wins championships” to remain true – they can’t lose you points.
Kicker
Traditionally the last position drafted each fantasy season or filled each week through waiver-wire pickups is the kicker. While the kicker is seen by some as non-essential, the position can almost guarantee points each week.
This year, Kansas City’s Harrison Butker and New Orleans’ Wil Lutz lead fantasy kickers. Butker averaged 10.1 fantasy points a game against Lutz’s 9.9 – the two finished the season only 3 total points apart. Both the Cheifs and Saints scored often enough to guarantee XP attempts and showed no hesitation in going for 40+ yard field goals. Making this decision almost a coin flip.
Butker’s 89.5% field goal conversion is the difference-maker. He was just slightly more consistent than Lutz. Both the Cheifs and Saints scored often enough to guarantee XP attempts and showed no hesitation in going for 40+ yard field goals.

With the 2020 fantasy football season months away, it is never too soon to start preparing. But that preparation might not pay off. Lamar Jackson wasn’t projected among fantasy’s top 10 QBs in the preseason picks from ESPN, NFL.com, Fantasy Football Today, and CBS Sports.