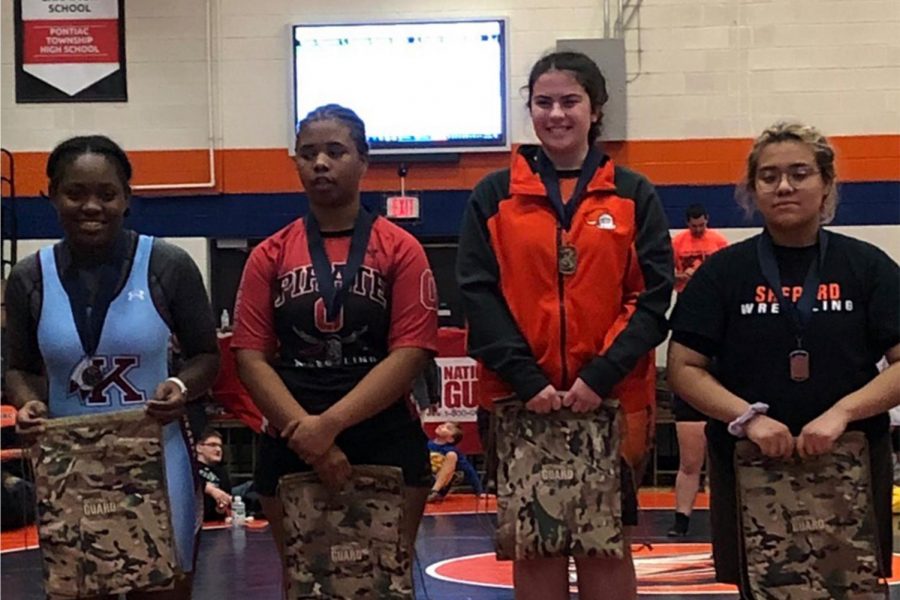 The wrestling team has seen some new faces this year, adding two female athletes to their roster of previously all boys. Shelby Hailey and Pyper Wood joined the team for the 2019-2020 wrestling season.

“My brother joined the team [in middle school],” Wood said, ”and I realized that I wanted to do it with him, but I didn’t realize that I would be the only girl for that season.”

The boys wrestle with the same intensity, and treat Wood and Hailey almost entirely as equals, according to both girls.

Even though Wood and Hailey get the same experiences, both girls have to take extra precautions to make sure they stay safe and out of any potential harm. Although they were both given some leniency in middle school wrestling, the hair situation is different for high school.

“Last year we had to wear a hair cap. This year… they wanted it up,” Wood said. Keeping hair out of the way prevents disruption in the middle of a match.

Hair is not the only obstacle for the girls. Logistical issues, predictably, will come up. Where they change, who they wrestle, and a number of other problems could get in the way. The girls and them team as a whole won’t let that happen in their pursuit of trailblazing one of the biggest up and coming sports.

From the ’90s to now, female wrestling has seen growth from 800 to 20,000 people, starting to gain more traction in recent years.

Kaufman hopes to implement a full women’s schedule for next year’s season. Two-piece uniforms have already been ordered and are preferred by girls and even some boys.

After becoming the first two women to win matches for the Lady Iron, Hailey and Wood have continued their historic seasons by winning their respective divisions at The Munch wrestling meet in Pontiac.