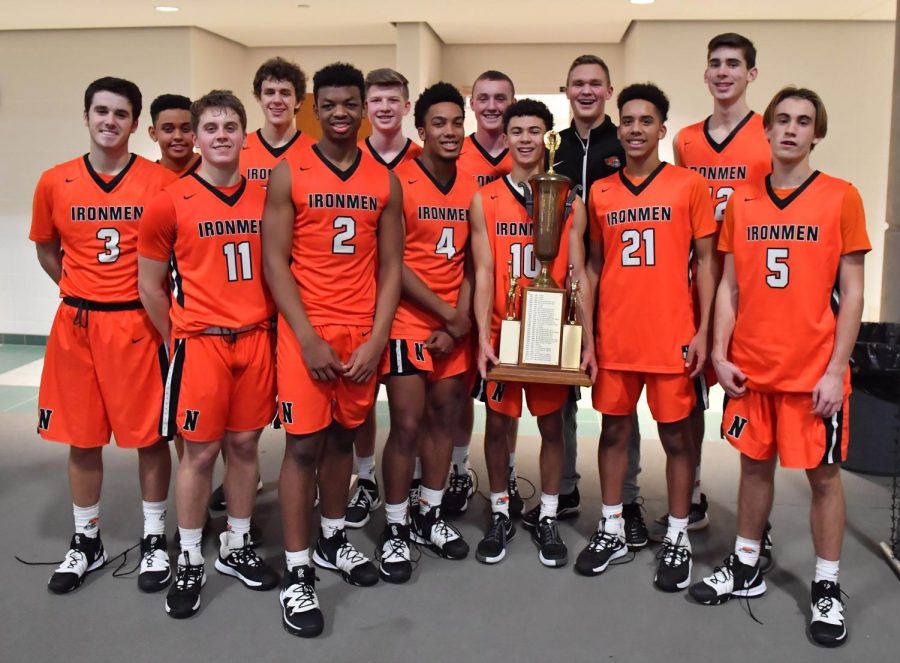 The Boys Basketball team poses with the Intercity championship trophy after their 63-60 win at the Shirk Center on Monday, December 2nd.

It took four overtimes for the NCHS boys basketball team to cap off an undefeated Intercity tournament with a 63-60 victory over Normal West on December 2.

With four seconds left on the Shirk Center clock, Community’s Mitch Sauder (‘20), drained a three-pointer to break the 60-60 tie. The tie-breaker came off a pass by Trey Redd (‘22) who finished the night with 18 points.

Jimmy Gillispe (‘20) added 18 points of his own with 12 of those coming in the 4th quarter, helping lead the Ironmen into the series of overtimes.

The Ironmen came out strong in the first half, finishing the 1st quarter on top with a score of 12-8; leading at halftime 25-19.

In the second half, the Iron fell behind and remained there throughout the remainder of regulation. The Wildcats outscores NCHS 23-17 in the game’s final two quarters.

“We came out too relaxed…,” Justin Potts (‘21) said about the team’s second-half performance. “West probably saw it as an easy win due to our lack of varsity experience,” Potts (‘21) added, “but we all trusted each other to get it done.”

Despite such a change of pace in the game, the Ironmen were not done fighting – forcing West to four overtimes. There could have been a fifth if not for the play by the senior-sophomore duo of Redd and Sauder as time was expiring. “Making the game-winning pass was a great feeling because Mitch had missed two previous opportunities to win the game for us, but I just kept trusting him, feeding him the ball, and eventually he got the game-winner for us,” said Redd.

With the overtime win from the Ironmen, they took home the Intercity trophy and came out on top as the top team in Bloomington-Normal to start the 2019-2020 season. The tournament victory improved the Iron’s record to a total of 4-0,  surpassing last season’s tournament record of 3-1.

NCHS is 5-1 and opens play at home on Friday against Champaign Central.