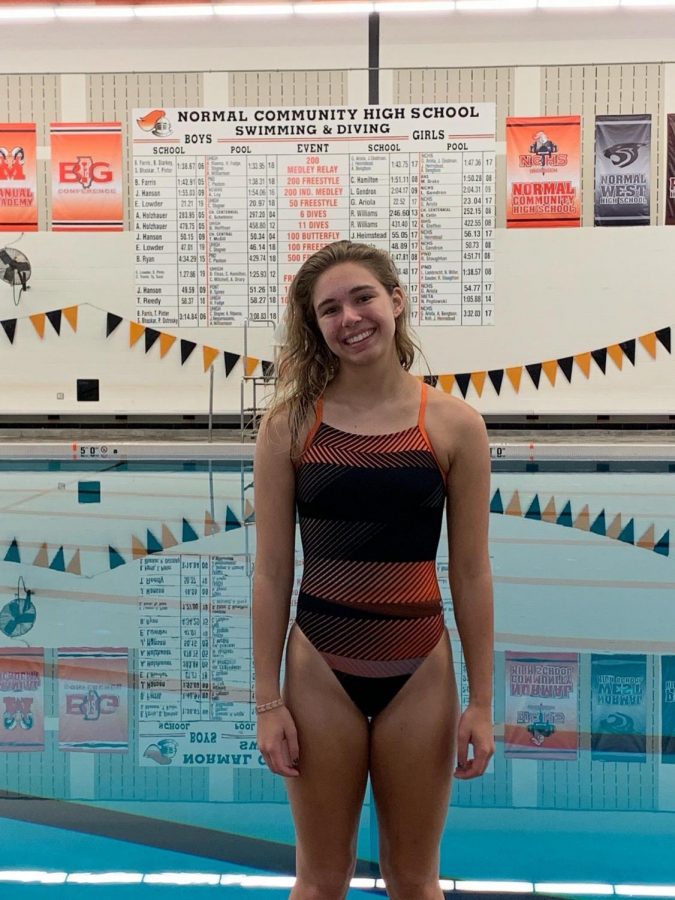 Weber in front of the Iron pool record board after breaking the six dive school record.

Anya Weber broke the school diving record for six dives Saturday, September 14, with a score of 257.95, breaking the previous record of 246.60. Weber accomplished this in only the third meet of the season, but that meet was her last opportunity to break the record, as there will be no more six dive competitions at any meets later in the season. Weber has been selected as this year’s first Inkspot athlete of the week for her accomplishment.

Weber realized she had what it takes to break the record last year, and at one point, thought she had already beaten it.

“I thought I broke it, but they had another record that they forgot to put up. So they had to put that one up and I was behind it,” said last year’s state qualifier.

Diving coach Mr. Brandis Heffner recognizes Weber’s accomplishments as a result of the effort she shows year round.

“Anya works hard in the offseason,” said Heffner,  “I’m excited to see her rewarded for all that work by getting her name up on the record board so early in the season.”

With plenty of time remaining in her senior season, Weber’s new focus is simple:

“Break the next one.”

Weber is confident that she will be holding the school record for both six and 11 dives, “by the end of the season, probably.”

Looking past high school, Weber hopes to continue diving at the next level and is currently looking at a number of colleges.