Baseball is slow, not boring 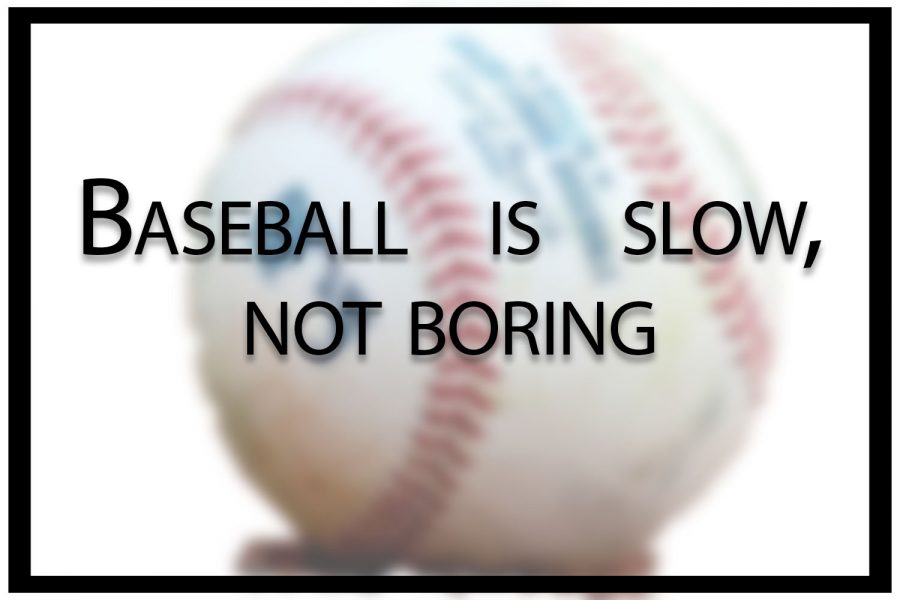 Major League Baseball has been looking for ways to speed up games and make the already time-consuming sport shorter in game length to boost fan interest and attendance. The past seven MLB seasons’ games have all averaged at or above the 3-hour mark – a trend that is continuing. The average length of a game last season was 3 hours and 4 minutes – an increase of 10 minutes from the 2010 season. With 813 games played in the 2019 season, the average game clocks in at 3 hours and 6 minutes.

MLB commissioner Rob Manfred issued a statement at the baseball owners meeting in Los Angeles earlier this year, informing teams and the baseball community that he is pleased with the cooperation and urgency of the Players Association in taking concrete steps and finding solutions to address pace of play.

“My strong preference is to continue to have an ongoing dialogue with players on this topic to find mutually acceptable solutions,” Manfred said.

However, players and coaches have voiced their opinions on the effort to shorten games. On the subject, NBC Sports Chicago Cubs writer, Tony Andracki said, “Both Theo Epstein and Joe Maddon have talked recently about how the game length isn’t as big of a deal as the lack of action.”

“If a game is 4 hours long,” Andracki said, “but there’s a ton of action and excitement, does anybody care about the length of the game?”

But today’s game of baseball has some of the least action ever with so much time between balls put in play.

The game’s philosophy has evolved from players making a living hitting line-drives with downward, hard contact and having speed on the basepaths. Today, launch angle is a focal point in a hitter’s swing and putting the ball in the air is the goal. Hitters now are making their money hitting home runs.

2017 marked the year that the home runs were hit in an MLB season at a whopping 6,105. A drastic jump in just the last decade, as in 2009 there were 5,042 home runs hit – statistical proof that the old philosophy of hitting for contact is dying.

Pitching is another aspect of the game that has evolved where velocity has become a focus. In the last decade, the average fastball has increased from 92.0 miles per hour in 2007 to 93.6 in 2017.

This combination of a change in hitting and pitching has lead to more strikeouts and batters seeing more pitches per plate appearance than ever before which means less action in between those homeruns. Baseball has become an all or nothing game.

“Right now, the game has the least amount of action it’s ever had, with so much time in between balls put into play,” Andracki said. “Strikeouts are cool for pitchers’ stat sheets and fantasy baseball, but very few people want to come to the ballpark to see each team strike out 15 times and walk 5 times each. That’s where the game gets boring and drags on and everybody discusses things like length and “pace of play,” he explained.

The solution to the pace of play problem in baseball is clear when you think about why people attend baseball games. It is for the full ballpark experience: hotdogs fresh off the grill, salted peanuts and an ice-cold beverage to quench the thirst on a scorching hot summer day.

The solution to the pace of play problem is recognizing it isn’t a problem.

The ballpark is a place where the pressures of work, school, and life, in general, go away, and the arguments that you had with your siblings and parents go away. It offers an escape from reality where grown men play a game for a living.

When a fan pays eighty dollars for a ticket, they want to get their dollar value’s worth with the experience. A 3-hour game allows them to attain this.

But fans aren’t the only the ones affected financially. Think about vendors, they are paid by commission on each item they sell, along with tips. Reducing the game length means less food or drinks sold, less money made. Not only would trying to speed up games hurt the business aspect of baseball, as well as the game itself but more importantly it would financially hurt the people working to make fans experience at the ballpark more enjoyable.

The problem isn’t baseball’s pace of play. It is our attention span – when we can’t go 15 minutes without looking at our phones a baseball game might seem slow. A pitching duel, a no-hitter – amazing feats that take time to develop might seem slow. But this is a problem with our thinking, not the game of baseball. Maybe a 3-hour ballpark experience is just what we need to unplug. San Fransisco’s AT&T Park was renamed in 2019, Chicago’s U.S Cellular in 2017; as phone companies lose their naming rights to ballparks, maybe ballparks serve as the right venue to reclaim our attention spans – 3 hours at a time.