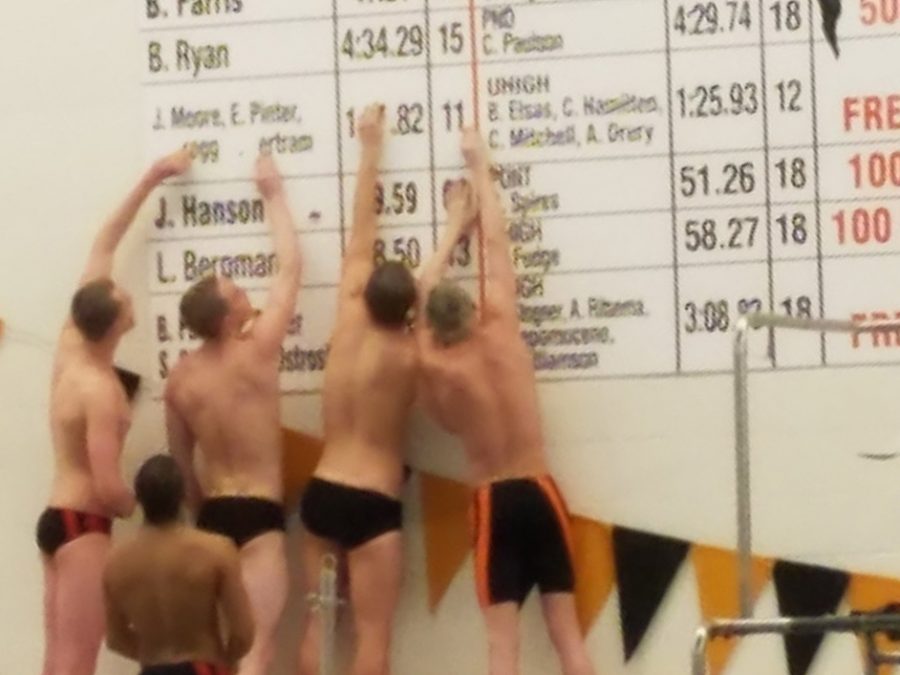 The 200 freestyle relay team removed the names of the prior record holders - Jack Moore, Erik Pinter, Jeremy Gregg and Jake Bertram - during their first practice after breaking the eight-year-old record.

The boys swimming team broke three school records and advanced two individuals and a relay team on to State at the IHSA sectional meet Saturday, February 16. The team finished the competition in 3rd place as they took home five sectional titles.

Ethan Lowder (11) was between the lane lines as all three NCHS records fell, and he has the opportunity to further improve his times as New Trier High School hosts this weekend’s State meet. Lowder will be competing in three events, the 50- and 100-freestyle as an individual and as a leg of the 200-freestyle relay team. Lowder broke Brian Ferris’s 14-year-old record in the 100 freestyle – besting the mark by .2 with a time of 47.01. Lowder improved upon his record from last year in the 50, shaving the mark of 21.64 down to 21.21.

Lowder helped to break the 200-freestyle relay school record with teammates Tyson Tucci (9), Shannon Pint0 (12) and Christian Travis (10) – but just barely. The four clocked in at 1:21.86, a hundredth of a second better than the 2011 team’s 1:21.87. .o1 was enough to require a change of the record boards in the NCHS pool – and enough to move the team to the IHSA’s biggest stage.