Bears find their Monster of the Midway 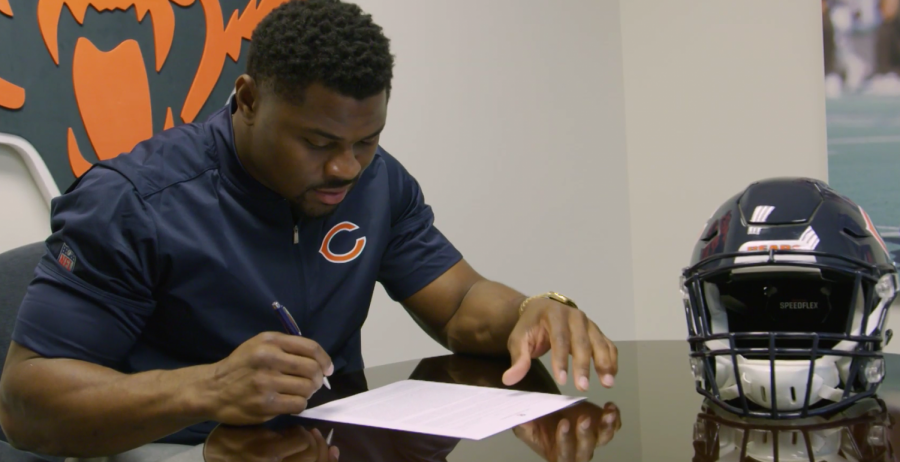 There is a lot of hype surrounding week one of the NFL season kicking off on Thursday when the Super Bowl champions, Philadelphia Eagles, host the Atlanta Falcons. While everyone does start 0-0, some teams have more expectations coming into the season than others. The LA Chargers, who some are predicting to make a Super Bowl run with QB Philip Rivers and pass rushers Joey Bosa and Melvin Ingram, yet they haven’t made the playoffs since 2013. The Houston Texans with DeAndre Hopkins will finally have a QB with Deshaun Watson back and JJ Watt; this might be Le’Veon Bell’s last year in Pittsburgh with his contract holdout, and  could be the last shot they have to win a Super Bowl with the killer B’s (Ben Roethlisberger, Antonio Brown, and Bell); and now the Chicago Bears capped off an already busy offseason by trading for Mack. The season will start for all the other teams on Sunday when Chicago will once again have a true monster of the midway.

The main reason 27-year-old Khalil Mack was on the trading block was because of money. Mack, arguably the best defensive player in the league, wanted to get paid as one. On Friday, August 31, the Los Angeles Rams reached an agreement to sign defensive end Aaron Donald to a 6-year $135 million contract. This set the bar for the money Mack wanted, but the raiders had already invested in QB Derek Carr, giving him 5 years $125 million. They didn’t want to invest over $50 million a year in two players. The Bears signed Mack on Saturday, giving him 6 years $141 million and $90 million guaranteed.  For a matter of hours, Aaron Donald was the highest paid defensive player in league history – until Mack.

The Bears defense was good last year, having the tenth ranked overall defense and they were the ninth best defense in points per game allowing 20. But Mack can help make them a great defense. Mack is one of the best at getting to the QB. He has 40.5 sacks since he entered the league in 2014 which is second behind ARI Chandler Jones. He will also be able to free up Leonard Floyd and Akiem Hicks as pass rushers because Mack will most likely command a double team which will leave others one-on-one. Floyd and Hicks combined for 13 sacks last season, but the added pressure on the QB can allow the Bears front seven to shine.

With standouts like veteran LB and Super Bowl winner Danny Trevathan as the leader of the defense, Roquan Smith the 1 round pick from this year’s draft, Leonard Floyd, Akiem Hicks, DT Eddie Goldman, and now Mack, if everyone can stay healthy and perform to the level that they are expected, this Chicago Bear Defense could become the most feared defense in the NFL.

“We have to look at it like Khalil Mack is our first round pick for 2019,” Ryan Pace, the Bears’ General Manager, said in a press conference Sunday. The hefty price the team paid for Mack, giving up two first-round picks is a gamble that could pay dividends.

Scouts have compared Mack to Giants Hall of Fame linebacker Lawrence Taylor. Bear fans will just have to see if he can become that in the next 6 years, and it will start Sunday night against the Packers.