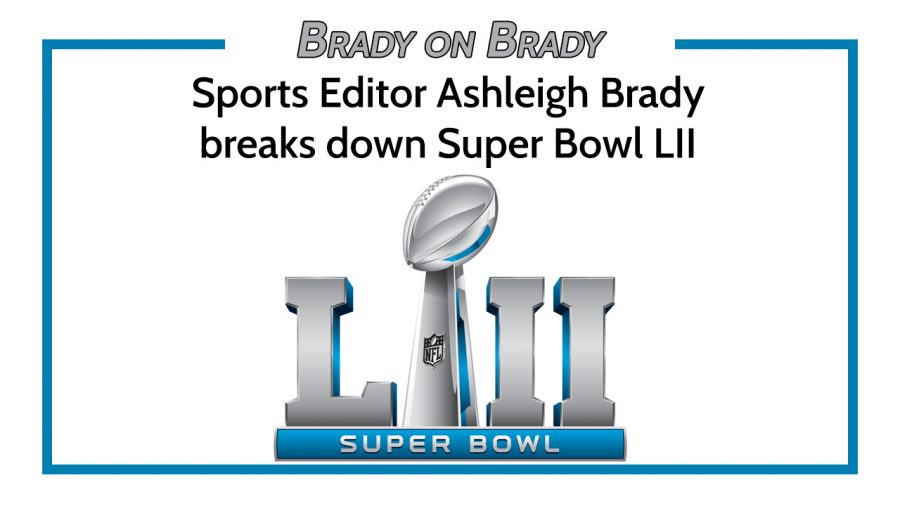 With two 13-3 teams, picking this year’s Super Bowl champ is difficult. Both teams are stacked with talent on either side of the ball, so let’s break the game down.
Quarterbacks:
Starting with the Patriots, QB Tom Brady is New England’s greatest weapon. The 40-year-old has been at the helm of the Patriots since his sophomore season after he was drafted in 199th overall in 2000. In this long career, he has led his team to the Super Bowl 7 times and his 5 Super Bowl wins are an NFL record amongst quarterbacks.

Brady’s passing yard statistics are nothing to laugh at, he has thrown for 66,159 yds in his career and 4,557 in this season. In all-time standings, Brady ranks 4th behind retirees Peyton Manning and Brett Favre and active QB Drew Brees. This season, Brady is the NFL’s passing yard leader.

However, it’s not just Brady’s arm that is dangerous.

There’s a reason why every player on the winning team receives a Super Bowl ring. Winning the game requires teamwork and trust that everyone will run the right route, block the right person, and get the ball through the uprights. For the Patriots, this trust comes from Tom Brady’s leadership.

Brady stated after the Patriot’s 2017 comeback Super Bowl win, that “when they get in the huddle with me, I want to look in their eyes, and I want them to feel a belief that we’re gonna do it” in a Fox interview with Terry Bradshaw. Tom Brady’s arsenal of leadership, experience, and skill will be a hard test for the Eagles.

Philadelphia QB Nick Foles is a much younger than Tom Brady, only 29. This youth could help or hinder the Eagles in the Super Bowl game. His inexperience in playoff games, (0-1) before this season’s run, might lead to nerve-driven mistakes.

However, this season’s playoff games have put Foles up against teams with effective pass defense. In the NFC championship, the Eagles faced the 12th in pass defense Minnesota Vikings. In this game, Foles was able to post a nearly 79% pass completion rate and 3 TD passes.

With proven pass capabilities and proficient pocket awareness, Foles has all of the tools necessary to put up serious yardage against the Patriot defense. What remains to be seen is whether or not he can stifle the nerves and play to his full capacity. Regardless, it’s sure to be an entertaining game, because, as Foles put it in a post-game interview, “That is the beauty of football. That is why I love it. There is going to be adversity, you have to overcome it and have fun doing it.”

Offensive Threats:
After Brady takes the snap, he is lucky to have a full roster of offensive playmakers. On the rush, he has Dion Lewis, a talented and effective runner. Never one to shy away from a hit, the 5’8” athlete is able to muscle through the defensive line. Even against the best rush defenses, Lewis can be counted on to find a hole and rack up the yards.

The main wild card for the Patriots is tight end Rob Gronkowski. In the first half of the championship game, Gronkowski suffered a concussion and is yet to be cleared from concussion protocol. However, he practiced with the team on Saturday, and according to Jim McBride of the Boston Globe, Gronk “looked in fine form as he went through stretching, jogging, and then catching passes during individual drills.” Until Friday’s injury report, there’s no way to know for sure if Gronkowski will be playing in the Super Bowl, but betting money is on that he’ll start the game with his teammates. If so, the 6’6” TE is sure to be the target of quite a few passes from Brady.

Philadelphia is 2nd behind only Jacksonville in team yardage, and this impressive statistic stems from consistent offensive talent. The leading Eagles rusher, LeGarette Blount, is a particularly dangerous weapon against the Patriots. Blount signed a 1-year contract with the Eagles for the 2017-2018 season after spending a total of 4 seasons with the Patriots (he had a short stint with the Pittsburgh Steelers in 2014). Blount was incredibly successful with the Patriots, playing an integral part in last year’s Super Bowl victory. With the Eagles, Blount is the leading rusher, and his insider knowledge of New England’s play will be invaluable for Philadelphia.

Eagles tight end Zach Ertz is also a key player to look out for. Ertz, 6’5”, has had a fantastic season. With 74 receptions for 824 yards in the regular season, the TE has potential to make the large-gain plays necessary to defeat a difficult team like the Patriots.

Defensive Threats:
As every middle-aged dad swears, defenses win championships, and both teams need to be at their best to win. The Patriots run a Fairbanks-Bullough 3-4 defense, meaning that their formation consists of 3 defensive linemen and 4 defensive backs. This design lends well to a tough, physical presence on the line with less emphasis put on the secondary. Defensive tackle Malcom Brown is a crucial part of this defensive. The Patriots drafted Brown in the first round of the 2015 draft, and he has racked up 147 tackles in his career. Look for Brown stopping the rush up the middle on Sunday.

It’s impossible to predict who, but you can expect to see strong Patriot coverage on Eagles RB Jay Ajayi. Ajayi was a frequent ball carrier against the Vikings, so the Patriots are going to have to keep him locked up and unavailable. Linebacker James Harrison is a potential matchup for Ajayi.

According to Eagles defensive coordinator Jim Schwartz, Philadelphia will be running a 4-3 front defense. This means that there will be 4 defensive linemen up front, and 3 linebackers behind them. The linemen’s main job will be to quickly and aggressively attack the Patriot offensive line, hopefully freeing up a route for a linebacker to get to Brady and the ball. This will be defensive tackle Fletcher Cox’s priority on Sunday. At 6’4” and 310 lbs., Cox is a massive physical threat and will be a key player to look out for.

However, despite the best effort of the linemen and backs, Brady is going to get passes off, and the Eagles will have to rely on their secondary to stop the big plays and drives the Patriots are famous for. Versatile safety Malcolm Jenkins will most likely be all over the field. He has proven himself to be very effective in deep coverage, center field, and even occasionally attacks the line of scrimmage. Tom Brady is a lethal weapon, and the Eagles will have to be focused and at their best for the entire game if they want a chance against him.

Special Teams:
The Patriots kicker Stephen Gostkowski has a 91% accuracy rate for field goals and a season-long of 62 yards. Eagles kicker Jake Elliott rivals Gostkowski’s stats with an 84% accuracy rate and a long of 61 yards. Both kickers are very consistent, and both can be counted on to put up field goals on Sunday. Field goals aren’t as exciting as touchdowns, but for two relatively evenly matched teams, 3 points could be the difference between going home with a ring or going home empty-handed.

On punt return, the Patriots have Danny Amendola who averages about 8.6 yards per return, but his long of the season is 40 yards. Eagles returner averages 3.6 yards per return and had a 98-yard return for a TD. Although they probably won’t be scoring on Sunday, good starting field position is extremely important for completing a scoring drive, and both returners have consistently set up their teams at a manageable place in the field.

The New England Patriots, especially heralded by Tom Brady, historically have success in the Super Bowl, but the Philadelphia Eagles just might have the talent and skill to usurp the throne.