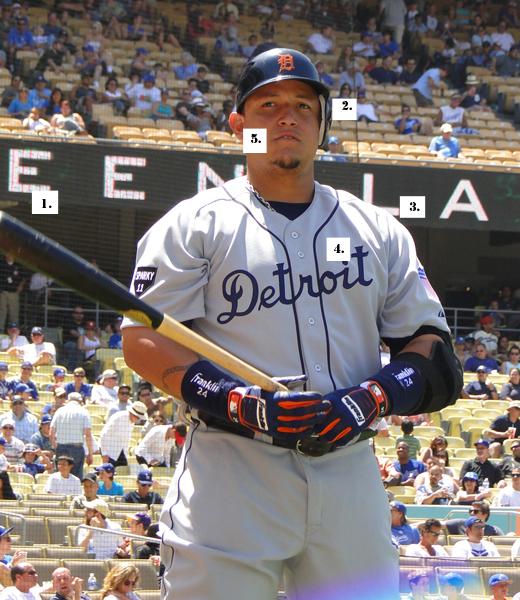 Miguel Cabrera is on pace to be one of the greatest hitters of all time.  His triple-crown 2012 season was one for the record books where he recorded 44 home runs, 139 RBIs and had a batting average of .330.  Labeled as the most dangerous bat in baseball, Cabrera has been putting fear in pitchers for 10 seasons now. With a career average of .321 over ten plus seasons, he’s bound to keep terrorizing pitching staffs until his retirement.
You may wonder, what pitcher would be dumb enough to throw too many strikes to Cabrera? Well they don’t. Cabrera has 799 walks in 11 MLB seasons and averages 78 in a regular 162 game season. This excellent eye for the ball that Cabrera possess allows him to maintain such a high batting average and maintain one of the highest on base percentages in baseball.
Now Cabrera is no Gold-Glover, but he has made a drastic position switch, which would be difficult for any fielder. Recently, Cabrera changed from a first-basemen to a third-basemen to accommodate slugger Prince Fielder. In his 2013 season at third-base he committed 12 errors with a fielding percentage of .958.
The All-Star slugger remains connected with his home in Venezuela and remains active in the Detroit area. Born in 1983 in Maracay, Venezuela Cabrera started playing baseball at a young age. Currently in Detroit, he has started The Miguel Cabrera Foundation, which helps a variety of children funds. In 2012 and 2013 Cabrera was nominated for The Roberto Clemente award, which is given to the player who represents the sport, the best on and off the field.
Cabrera has got it figured out. With a World Series win under his belt and being an 8-time All-Star he’s on track to be one of the greatest of all time and he’s saying the right things to stay on top: “When I was coming up, I just wanted to play baseball and I’m doing what I love to do most. How can I feel pressure doing what I love to do?”      “I’m taking my time. I feel much more confident, and every day I feel like I’m getting better.”     “I’m just trying to play my best and have fun.”