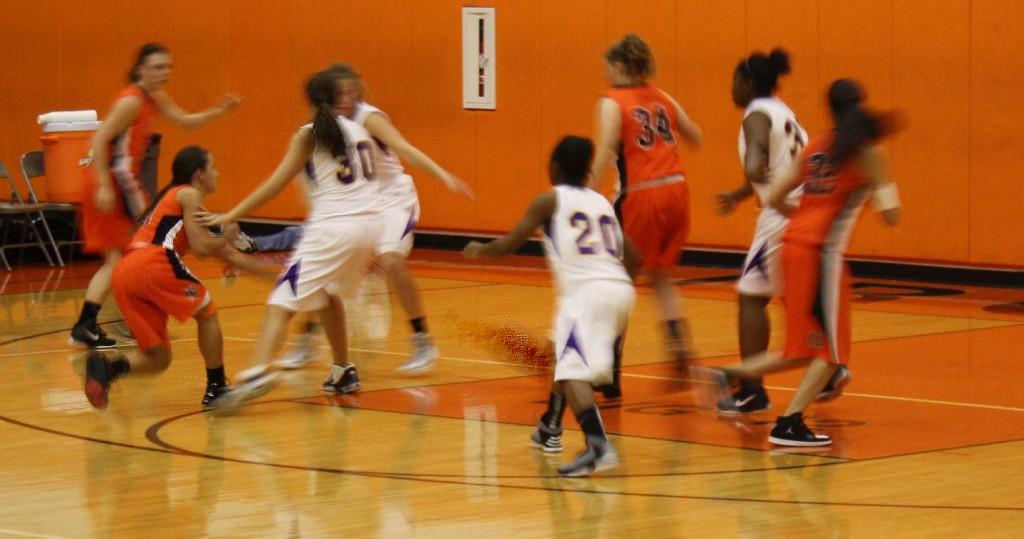 Senior Luci Weis executes a hard bounce pass to a teammate in their game agianst BHS.

NCHS turned out to be too much to handle for the BHS Raiders in Tuesday’s girls basketball game.  The Lady Iron came out on top with a score of 38-32.

Both teams had exceptional defense throughout the game; allowing very few open shots. A combination of quality defense by BHS and poor shot selection by NCHS resulted in only 6 points for the Lady Iron in the first quarter.  The Raiders outscored them 13-6 in the first.

NCHS came back out looking strong.  They took the lead in the middle of the 3rd quarter when senior Luci Weis drained a 2-pointer, making the score 22-21.  Although remaining very close for the rest of the game, they gave up that lead.

The score at the end of the 3rd was 25-21.  NCHS was able to leave the court smiling after the game as they walked away from a 38-32 victory.

The only injury in the game occurred when Kristina Harvey was charged late in the first half and appeared to injure her ankle.  Harvey did not leave the game immediately, however she was seen limping for the next few minutes until finally, she signaled to her team that she needed to come out.  Harvey returned late in the second half showing no signs of pain.

Although they came out on top, the Lady Iron  struggled with recovering rebounds. Numerous times, BHS was able to take 3 or more shots per drive because of NCHS’s inability to recover rebounds.

The lead scorer of Tuesday’s game was senior Tarynn Dodd with 11 points.

The next home girls’ basketball game isn’t until Saturday, December 15, when they will play Decatur Macarthur.