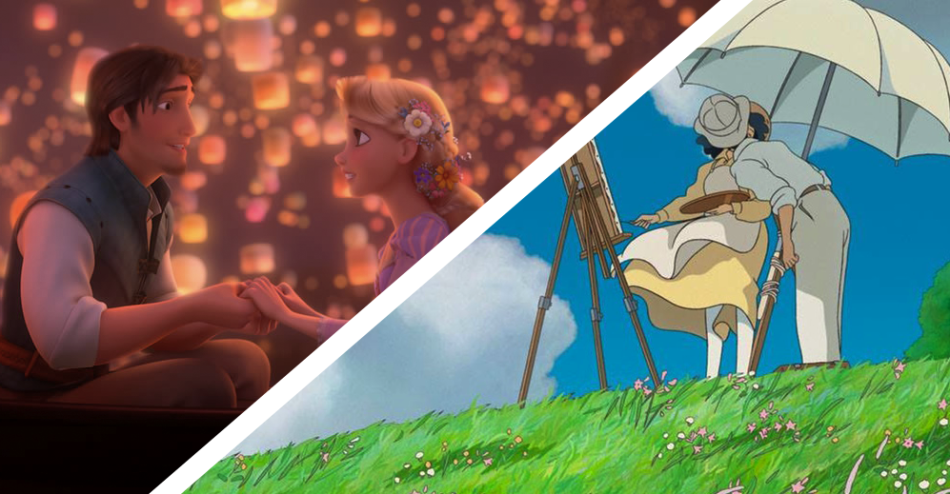 Growing up, I watched movies that  left permanent impacts on my life, teaching me valuable lessons about life, love, family, and chasing after your dreams. Many of these movies were created by two superpowers in animation- Disney Animation Studios and Studio Ghibli. Even as a teenager, rewatching my favorite movies from the two brilliant studios leaves me an emotional wreck, because so many of them are either bittersweet or heartwarming. However, I’ve often contemplated which studio I find to be better overall. I figured this piece would be timely, given that each studio has a film nominated for the Oscars in March.

Studio Ghibli was created in 1985 by Hayao Miyazaki and Isao Takahata. The studio wanted to “blow a new wind through the industry” and as of 2014, it has lived up to it’s aspirations.

More recently, Miyazaki has kept viewers on edge by stating in 2013, he would be retiring (again). However, in January of 2014, a Japanese blogger stated that Miyazaki would not be retiring according  a radio show broadcast on New Years Eve.

Studio Ghibli’s most well known films are Spirited Away, which won an Academy Award in 2001, Princess Mononoke (1997), My Neighbor Totoro (1988), Howl’s Moving Castle (2004), Ponyo (2008), From Up On Poppy Hill (2011) and The Secret World of Arrietty (2010). Furthermore, the studio’s newest film The Wind Rises has been nominated along with Disney’s Frozen for best animated film. Ghibli is known for the amazing detail in it’s films, deep plots with many motifs (spirits, legends, talking animals), and amazing artistry.

While watching and rewatching a film, I see something new each and every time, given the abundance of art within each scene. The style in which Studio Ghibli creates films is far different than Disney, but it’s something I admire and find beautiful.

A still from Howl’s Moving Castle displaying the immaculate detail of Studio Ghibli’s films. [Photo courtesy of Studio Ghibli]Alongside the art, the scores in the films are absolute genius. Joe Hiashi, a recognized and award winning composer, has worked alongside Miyazaki for 50 years- creating some of the most beautiful soundtracks I’ve ever listened to. (My personal favorites are the soundtracks to the films Princess Mononoke and  Spirited Away) The songs align with the films extremely well and tell just as much of a story as the film does.

The plots of the films are extremely unique and have quite a bit of depth. They can range from whimsical and vibrant to more of “slice of life” style films, taking a look into the life of a person. In the studio’s film Spirited Away, the plot is almost a little strange. It follows the adventure a resentful and childish girl (who is  movings with her family to the suburbs) and through no fault of her own is stuck in a world where her parents are pigs and that world is filled with witches, a dragon-boy, an oversized baby, and  masked spirits. However it presents key topics like remembering who you are (in this film- both literally and metaphorically), unconditional love, growing up, and trusting others. The ending is beyond bittersweet and I still cry when I watch it.

In contrast to the plot of Spirited Away, is the plot of Whisper of the Heart. It looks into the life of a girl who falls in love with a boy who aspires to be a violin maker. While the plot is relatively simple, it explores the idea of not only finding your dreams, but chasing after them.

* I’m sure once I watch The Wind Rises, it will have made my favorites.

Walt Disney Animation Studios has been around since 1923 and is one of the most successful studios in History. It was founded by Walt and Roy Disney, who operated out of a tiny office in the back of a building located in Los Angeles.

It’s first full-length film was Snow White and the Seven Dwarves (1937) a film most consider an animated classic.  Furthermore, it has created some of the most popular and well known animated films around such as: The Lion King (1994), The Little Mermaid (1989), Toy Story (1995), Finding Nemo (2003), Aladdin (1992), and most recently last year, Frozen.

Disney has many strengths, and what makes Disney films so unique is the “magic” in them. Many of the films take you into a “whole new world” and lets you leave reality behind.

Peter Pan, which is one of the best films that illustrates the “magic” behind Disney’s films.    [Photo courtesy of Disney Animation Studios]Furthermore, many of the plots leave the viewer with a happy and feel-good ending. After watching many Disney films, I get a fuzzy feeling inside and satisfaction from the ending which has been tied together well (Disney tends to not leave a cliff-hanger or open ending).

In a lot Disney films we see the main character getting what they want and living “happily ever after”. Many of the plots of Disney films are quite straightforward and even a little predictable. However, Disney is creating characters with more depth and diversity.

Despite the seemingly basic plots, Disney never ceases to impress. The studio has produced many amazing and beautiful films and most recently, Frozen- which was absolutely amazing has topped my favorites list. The detail, the music, and the plot were all fantastic. It is one of the more developed Disney movies, with a more complicated plot, darker parts of the story, and even a bit of a plot twist. There is just some factor that makes them entertaining to watch and even if you’re not a child, they’re still appealing.

In regards to the animation itself, Disney has shifted towards CGI (computer generated images), which has been seen in films like Tangled, Frozen, Wreck It Ralph, and Finding Nemo.

While some enjoy the new style, others criticize Disney and say they feel as if the movies look too similar.

Out of all of the Disney films I have seen, I’ve loved almost all of them! My favorite five are:

In the end, Disney and Studio Ghibli are far from similar. While Studio Ghibli tackles more serious plots, adding whimsical characters and deep motifs- Disney brings it’s famous “magic” to every story and gives the viewer a fun and entertaining story.

While both Disney and Ghibli have only produced great films, Disney has created many more films than Ghibli- which has helped people get to know the studio better.

Furthermore, Disney films target a wide range of viewers, given that so many people are english speakers- therefore more are able to watch, comprehend, and enjoy the films. In contrast, Studio Ghibli films are in Japanese and later dubbed into English versions, but are still lesser known than Disney’s films.

Disney may have great sing along classics and unique stories, but I love the whimsical and sometimes obscure plots of Studio Ghibli films. While I absolutely love Disney films and will continue to watch them, Studio Ghibli will always be my favorite.