Opinion: Why you should care: The impact of current events on the high school life 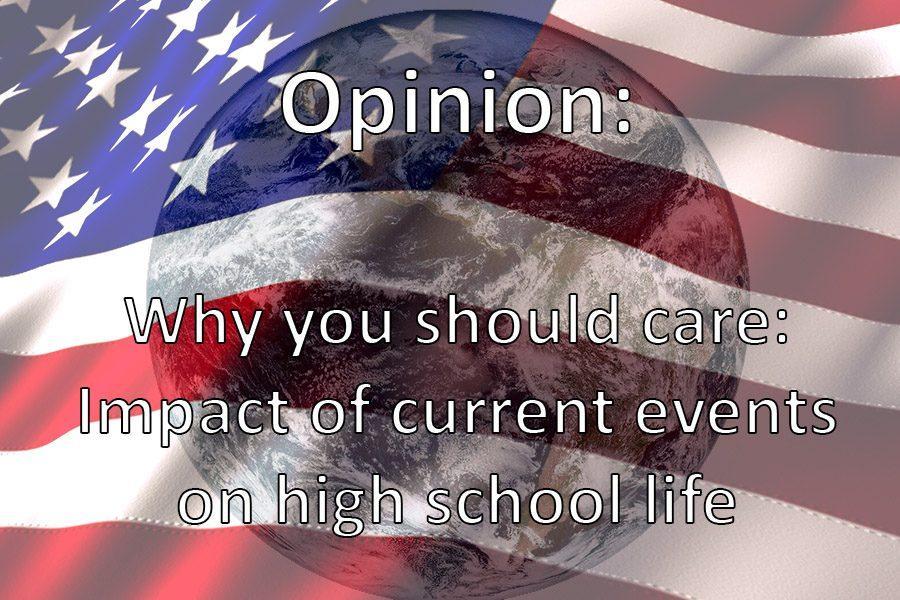 We live in an age where information is readily available, through our phones, laptops, and televisions, so much so that our phones buzz when a big news story is released, we see pictures from people living halfway around the world, and Google can give an answer in less than a second.

When it comes to pop culture, for example Beyonce’s pregnancy or the Grammy’s, people can tell you exactly what is happening, who said what, and how they feel about it. Political and social news, however, is a different story. Not only students, but many adults also have no idea of the events happening everyday in their country and around the world. From revolutions to natural disasters, change is occurring constantly, yet we pay no attention to it.

High school students do have busy schedules — homework, college applications, jobs, family obligations— that can add a lot of pressure. Our struggles are real and extremely important and I am in no way trying to undermine the difficulties of life. Life can feel hard, regardless of who you are. But still, students should be more aware of what is happening both nationally and internationally to help increase their empathy and create a better future, where the stresses of work deadlines, family, and getting older can be put into perspective.

Building a foundation of global awareness is essential in the development of critical thinking skills for teenagers. Learning to gain new perspectives from differing cultures and fostering empathy has been shown to increase students future success. A 2015 study published in the American Journal of Public Health shows a correlation between kindergarten social competence and future wellness, meaning that students who showed signs of empathy and social awareness were more likely to graduate from high school.

Empathizing with others opens students’ minds to think beyond themselves, allowing them to make deeper connections and understand more about the world around them. Looking beyond first world problems, like finding a prom dress or acing a test, and diving into large world issues, like the Syrian refugee crisis or the immigration ban, opens our minds up to so many more experiences that the average American high schooler will not have. Syrian refugees who are fleeing for their lives have challenges that are so much more grave than most of us can imagine —  persecution, starvation, homelessness — and these things are part of their everyday life.

While it is good to inform people these atrocities, becoming aware of these events is deeper than just knowing what is happening. It is understanding that people, equal to you and me, are suffering far greater things than most of us can imagine. Students who attempt to comprehend these types of situations can then begin to gain critical thinking skills as they look beyond what is right in front of them and grow in their knowledge of the world, branching out to discover new cultures and experiences. This increase in knowledge will not only benefit students educationally, but will foster more successful futures as they are mindful of how domestic and foreign affairs impact their own lives and the lives of those around them.

Too often we forget that in comparison to the rest of the world many of us have been given incredible amounts of freedom, liberty, and civil power. As US citizens, we have the right to protest, fight for those unheard, and play a large role in our governing body. The Women’s March, this past January in Washington DC, was the largest one-day protest in American history. An estimated 500,000 men and women gathered in support of women’s rights and equality, meant to show President Trump the power of the people. This revolutionary event showed just how much ability we as people have to make change in our country. We don’t have to fear being imprisoned for speaking for what we believe.

That’s not to say America is perfect — we have a lot of issues that still need to be resolved. But, we have been extremely fortunate in the life that the majority of us have, with opportunities to speak openly and ignite change. Youtube filmmaker, Casey Neistat, stated that, “We have won the lottery on life, and with very few exceptions…we have done nothing to earn this,” pointing out that as Americans we have resources and opportunities that are non-existent for individuals across the globe. Neistat continues by saying,

Neistat saw it. He saw the difference in lifestyles, in opportunities, and realized that he did nothing to deserve the liberties that he has in this country. The only thing different from Neistat and the girl suffering in Africa is where they just happened to be born.

Right now, those people seem to be irrelevant to us, too far away to even matter, and in a way they are. We have no legal or actual obligation to fight for them or work to better their lives. But if our country was war-torn, famished or corrupt by the slave industry what would we want others to do? Human rights, which we can freely fight for in our own country, are being taken away from millions of people all over the world. We have the voice, the resources, and the strength to fight for those that can not do it on their own. It is our job as future leaders and involved citizens that we not only become aware of those suffering, but that we also take initiative to help those who can not help themselves.

Long-term there will be serious consequences if students now do not start to care about the world around them. High school students, in just a few short years will be our leading politicians, our business leaders, and our participating citizens. Turning a blind eye to those struggling beside us will be detrimental to our foreign relations and our nation’s ideology.

The United States of America was founded upon the preservation of human rights and we have been given the phenomenal ability to pursue justice for those around us. We have seen in the recent months an incredible unity of people in our nation to fight for what is right and speak out against inequality. It is time that we begin to use our voices to speak for those who have no voice, fight for those who have been beaten down, and show the world that our generation will be one of hope, love, and an outpouring of compassion.