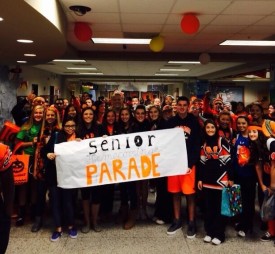 As some of NCHS’s earliest-risers may have noticed, a group of seniors decided to have their own homecoming “parade.” For those who didn’t see, the parade consisted of about 30 seniors walking through the hallways chanting the NCHS school song while throwing candy to the perplexed on-lookers.

At the end of the event, the group of seniors taped up a banner that they carried throughout the whole procession that read: “Senior Parade.”

Seniors involved in the parade thought it was a good way to deal with not having a parade and a way to have fun.

“It was fun to be a part of. Students were in good spirit and it certainly brightened my day,” Christian Arjona (12) said.

The student leader and organizer of the senior parade was Cassidy Nieves (12).

“The administration had no idea that we were going to do this,” Nieves said. When asked if she thinks that this will turn into a tradition she said, “I think and hope the juniors will carry this out next year if they don’t have a homecoming parade.”

I believe that this was the right response to not having a homecoming parade this year. I think this was far more appropriate than last years “Senior Picnic.” The picnic interfered with class time and was done out of irrational frustration.

There was nothing the administration could do to make last year’s rain stop and they went to great lengths to try to find another place to hold the senior picnic.

The mock-parade was a light-hearted display of the student’s frustration with not being able to have a traditional homecoming parade. This was done before school hours so it did not disrupt the school day in any way. The act showed that the students were upset, but the seniors understood why the administration would decide to not have a homecoming parade – a response to new state laws regarding early dismissal days.

While it may be a while longer until we have the usual homecoming procession, I believe that this is the reasonable, appropriate, and fun solution for the foreseeable future.