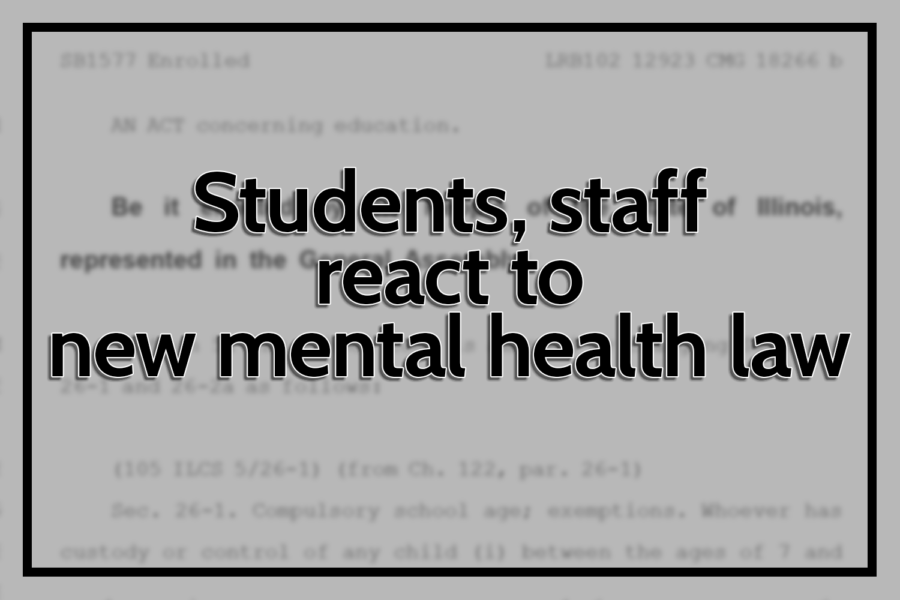 No doctor’s note is required to take a mental health day, but school counselors may refer absentees to a mental health professional after a student requests a second day.

While student mental health is a persistent concern for Community staff members, some have reservations about the law.

36-year social studies teacher Mr. Kelly Keogh thinks the legislation is “warranted,” but he doesn’t want it to become a “law of unintended consequences.”

“Just saying you have a day off of school…,” Keogh said, “can’t always be advantageous because what’s the home life like? We learned a lot about that with kids being full-remote.”

Especially in math, Feeney said, being physically present for notes is “such an advantage.” She said missing school—and therefore missing lessons that are hard to replicate—may cause school-related anxiety to increase.

Keogh and Feeney aren’t entirely opposed to the law, though.

“I think it’s a fine idea,” Keogh said, “as long as there are mechanisms in place where these kids are actually pursuing help to resolve the mental issues they’re experiencing because of the pandemic.”

Feeney said that getting professional help is “so important,” but she “would hate for it to take… miss[ing] two days for mental health before a red flag goes up.”

Teachers aren’t the only staff members with mixed feelings, either. Principal Dr. Trevor Chapman is also “a little conflicted” about the law.

“Let’s say that I’m someone who struggle[s] with depression and anxiety,” Chapman said. “My grades are not great, right? And part of what makes me anxious and upset is that my grades aren’t good. And I’m trying, I’m drowning in school. My concern is that if you take five days off, that you will continue to… become behind in what is already making you upset or anxious.”

If school is the “trigger” for anxiety, Chapman said, then completing coursework—not “taking an additional week off of school”—might be more effective in curbing the problem.

Chapman said this doesn’t “cover every situation, it certainly does not,” and he acknowledged that he is not a “mental health expert.”

School psychologist Mrs. Sarah Peterson, who has worked in mental health services at Community for 18 years, sees mental health days as a potential “eye-opener” for parents.

“[The law] could be good…” Peterson also said, “for a student to recognize that they’re having some issues and need a break.”

Psychology teacher Mr. Patrick Lawler said the new law is “a step in the right direction… for removing the stigma from mental health and making sure everybody’s got access to what they need.”

Lawler cited the fact that two-thirds of people who struggle with mental illnesses don’t seek treatment. Taking a mental health day, he said, “could spark some… discussions”— and ultimately “[help] people address the issues that they have.”

Junior Sharanya Srivastava felt “pretty happy” when she heard about the law.

“People are suffering with mental health [problems] like depression,” Srivastava said, “and it can be a lot, especially during school and finals.”

“If a lot of students are saying, ‘Hey, this is really hurting me,’” Skeate said, “then [people] should listen to us and do something to help us live through that.”

If you or someone you know is struggling with mental health, the Bloomington-Normal Path Crisis Center can be reached any time by calling 211 or texting TXT211 (898211).