Theatre program ‘Zaps’ back on stage 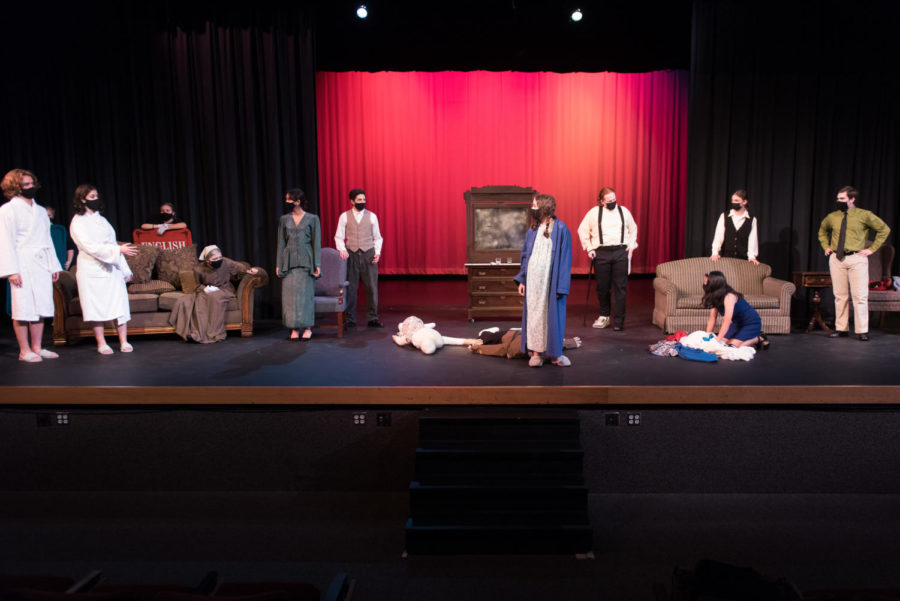 The cast of 'Zap!' ran through their final dress rehearsal Thursday, Oct. 14 in preparation for their first show on the Community stage since February 2020.

The Theatre program returns to the NCHS stage with “Zap!”‘s premiere on Oct. 15.

Last November, the Theatre program collaborated with the three area high schools and ISU to produce “Everywhere is a Stage,” a week-long virtual series of short plays.

In April, a live performance of “All in the Timing” premiered outdoors at the Connie Link Amphitheater.

The theatre company has not performed in-person on the Community stage in over 20 months, an extended intermission that ends at tonight’s 7:00 p.m. curtain.

“We’ve had kids just really dig in and learn a lot of brand new things very quickly and work a lot of hard hours,” Vernon said, “and we are really excited to be back doing that again.”

Seven plays collide in the comedy “Zap!” to spoof life, society, and theater itself.

“It’s all supposed to be making fun of those seven genres,” Vernon said. “It’s supposed to help people poke a little fun at the very traditions that we are so happy to be getting back to.”

An Agatha Christie-eque murder mystery, a Tennesse Williams-style Southern play, works from Shakespeare to the Avante-Garde… The show “zaps” from play to play as the audience loses interest — quick set and character changes mark each show swap.

With seven separate “sub-” casts performing the multiple plays-within-a-play production, Vernon said that “Zap!” “really is an ensemble show. There’s not one person who has a great deal more stage time than another.”

A cast and crew of over 60 students, Vernon said, allows the theatre company to “get a whole bunch of new people in and build that foundation that we may have lost over the last year and a half.”

While no role gets significantly more stage time than another, stage time has factored into the technical aspect of the show.

Rehearsals for “Zap!” have been hard on the technical crew who haven’t been working behind the scenes in their regular capacity since “Clue.”

In Vernon’s 18-years directing, “this is one of the highest numbers of technical cue-shows, I think we’ve had since I’ve been here,” she said.

Accompanying each shift from play to play is a light and sound cue.

The over 100 light cues and “almost that many sound cues” are overseen by crew members like Head Stage Manager Zac McCowan.

For McCowan, the return to the stage means everything is bigger: bigger cast, more lights, more sounds, more responsibility.

The junior isn’t worried, though.

“I didn’t realize how much I’ve missed this,” McCowan said, “since we haven’t been on stage for a while.”