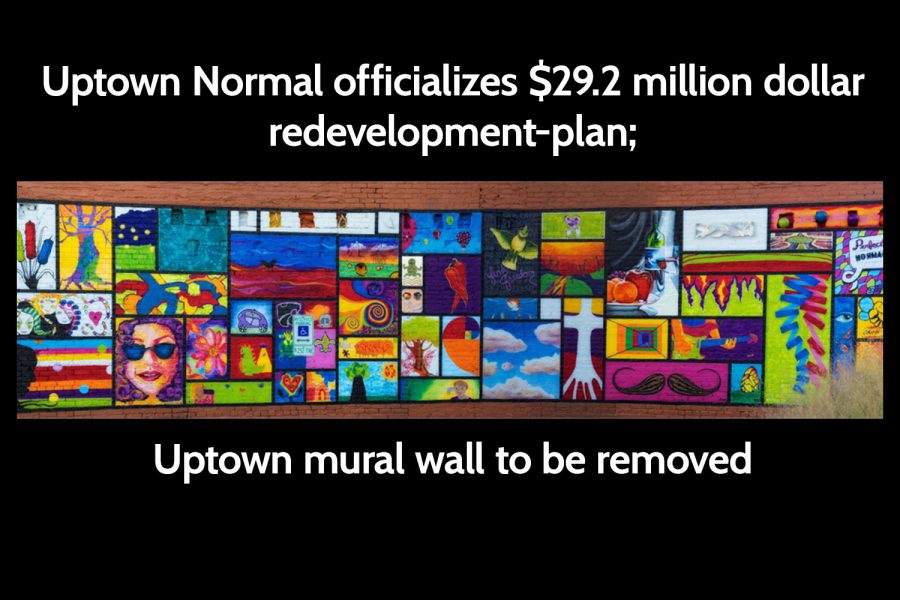 Uptown mural wall to be removed,

108 E. Beaufort is being torn down to provide “mid-block access” from Beaufort St. to the parking lot between Beaufort and College, according to the files from the Town of Normal’s council meeting on October 15.

104 E. Beaufort will be reconstructed into a 5-story building for mix business and residential use. The construction is approximated to begin in late spring 2019.

104 E. Beaufort is suggested to had been built in 1884 or 1885. In the course of the building’s over 100-year history, it has housed an agricultural feed and flour business, a cigar factory, and Michael’s Hair Design.

The building itself has stood in its near original condition for over 130 years with minor work on design aspects supporting the oriel window, which projects from the front of the building.

Most recently 104 E. Beaufort had been home The Pod; an art gallery; which had been opened in 2011 and closed this February. The Pod was responsible for some of the art pieces that make up the entirety of the mural painted on the wall next to the 104 building.

The plan for the lot’s new 5-story building features a food court on the first floor – a marketplace is planned to have ethnic restaurants and a selection of fresh produce.

The next three stories are planned to become offices for businesses.

Sally Heffernan, Economic Development Director of the Town of Normal, said there is also a chance of an incubator for businesses. These offices could give internship opportunities to students studying at ISU.

108 E. Beaufort’s removal is to accommodate the parking lot behind those buildings on E. Beaufort. With the removal of the building, there is estimated to be 26 more surface level spaces available which will be needed as a result of the changes to Uptown.

The parking lot currently has 3 entrances but with the redevelopment plan, they are planning to remove the third for a delivery truck loading space.

With the 104 building coming down, the painted exterior wall currently visible from the Uptown Circle will also be removed.

Heffernan explained that the external wall remains from the building that once stood next to 104 Beaufort – a building since demolished. Heffernan said that the murals painted on the wall are seven years old and have become damaged with some paint chipping, this is in addition to structural damage to the some of the wall’s bricks and mortar.

“I don’t think you can say a 7-year old mural is historic,” Heffernan responds to claims the wall is historic, a part of Normal’s cultural landscape.

Heffernan suggested other possibilities for the wall: “you take those bricks off and put it somewhere else.”

The redevelopment is planned to be filmed and digitally documented so the public and Town of Normal can watch the change of Normal.