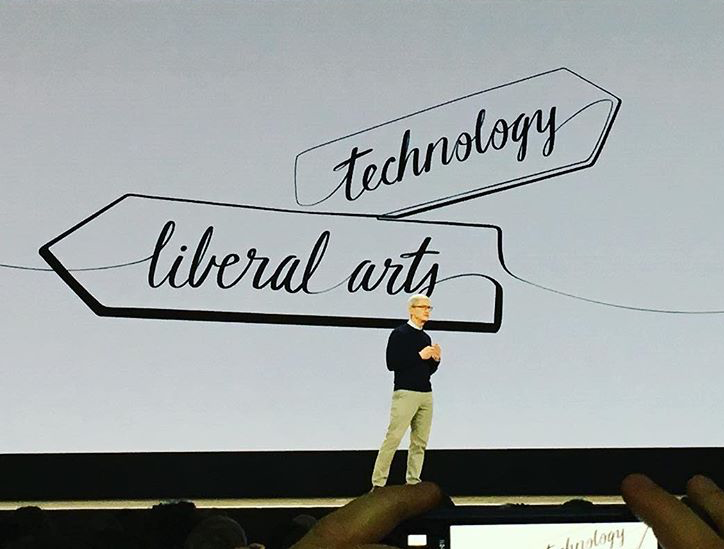 Apple CEO Tim Cook addresses the audience as the company took a field trip away from the site of its traditional announcements - heading to Chicago's Lane Tech High School - inviting members of the student media along. The focus of the day's announcements was Apple's renewed push into the classroom, aiming to blend "technology" and the "liberal arts".

“People with passion change the world,” said Tim Cook, Apple CEO, during his opening speech. It was made clear to spectators of this momentous occasion Apple’s passion for their new products could begin to revolutionize the world of education. This is a passion Apple made it clear that they hoped to share with students – through their product launch, pricing, and by inviting the student media to cover this “field trip”.

These were all questions Apple answered.

Apple began the day by unveiling a new iPad. One claimed to be “faster and better than ever.” Since Apple releases new and upgraded models of its electronics with frequency – the iPad itself wasn’t too impressive. What really left the audience stunned was the pricing of the new iPad at $299 for schools. An uncommonly low price for Apple products.

Apple also announced the upgraded Apple Pencil. The Apple Pencil allows users to take handwritten notes on the iPad using newer updates on already existing programs such as Pages and Keynote along with new programs Apple has developed. The Apple Pencil paired with the iPad takes the traditional school supplies of pencil and paper into the 21st century – but at a more affordable price point.

It is clear that Apple is seeking to compete against Google’s technology monopoly in education: with Google’s programming like Google Classroom and hardware like the Chromebook, through these releases.

Apple gave the audience, members of the press and government including former Vice President Al Gore, a sneak peek of a program that is yet to come. The name, Smart Annotations. With the Smart Annotations app, used with the Apple Pencil, students can be assigned an article to annotate, teachers can make comments on or offer revision ideas on a student essay –  simply writing on the text like they normally would with traditional pen and paper. The markings will cling to the words and won’t detach when the screen is moved, something that would not happen with current similar products.

Apple also released two more programs that seem more geared towards the younger generation of students. One program called Digital Books allows teachers to create interactive books for their students that can contain a combination of videos, drawings, and texts.

Another addition Apple made was adding new sounds and features to the already existing sound editing and recording program Garage Band, which allows students to explore music with hands-on experience without the risk of breaking a thousand dollar instrument.

One of the few but major differences that sets the new iPad apart from previous iPads is its ability to create an Augmented Reality. With the new programs Apple has created for its AR feature such as Boulevard AR, Free Rivers, and Froggipedia students can explore and discover environments as if they were live in the location at the moment. Students can see Art Museums as if they were in the museum, can study environmental engineering through trial and error, study the biology of a frog as it were actually there on the dissecting table. This AR feature is sure to benefit both frogs and students.

However, Apple didn’t just stop at trying to make students happy, the company created another program in the hopes of making teachers jobs easier as well. School Work, a program that will be available in June. School Work allows teachers to create handouts for their students and send them out via the app. School Work also allows teachers to assign activities to students, such as the beloved game Kahoot while being able to monitor Students’ progress.

Another program Apple created that they see as a fundamental to society is Everyone Can Code. Apple sees coding as the future and wants students to have access to understanding coding. Everyone Can Code teaches students critical thinking and provides them with the opportunity to design, program and create apps, drones, and even their own virtual reality simulations. Everyone Can Code also provides teachers with free resources on learning to code themselves, so teachers aren’t left out of the learning process.

It’s Apple’s goal to “bring out the creative genius” in all students across the world, and the products they released on March 27, 2018 are a sure step progressing towards that goal.