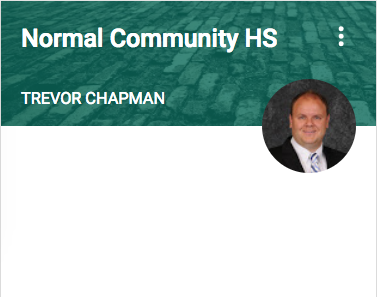 New principal, Mr. Trevor Chapman, has made some changes to the communication process between staff and administration at Normal Community.

Chapman has implemented changes in communication between teachers and administration with the creation of a staff-only Google Classroom and through the use of the push-notification service Remind101.

“It’s nice to have everything in one place,” Mrs. Tara Pendleton, business teacher, said, “and he’s already utilized [Remind101] once when there was an issue he wanted to bring to our attention and we got that information right away so that was great.”

Music department chair and choir director Ben Luginbuhl agreed, “It’s really great because we get all our faculty notes on [Google Classroom] and all of the building chair information is there so I know exactly where to go if I need to find information.”

Ms. Mirjam Schnabel, a German teacher, mentioned a weekly staff newsletter that contains information on community events and important reminders, such as the flu shots and yearbook picture retakes the week of September 17.

Chapman commented in an interview with the Inkspot staff that the biggest difference between his previous administrative duties at Evans Junior High School and NCHS was the sheer size of the schools. But Schnabel felt he has been effective in his communication, “I mean it’s not face-to-face but when you have over a hundred professionals working in this building, how do you do that? He can’t just be in the hallway chatting to teachers.”

In an attempt to make the transition between incoming and outgoing principals as smooth as possible, Chapman asked teachers what they would not like to see change at the school before he officially began the position.

“I told him I loved when they used to do ‘Pop on the Principal’,” Luginbuhl said,“. . . I always thought that was really cool when they would reward students for doing something right.”

While teachers have been mostly complimentary of Chapman, some staff members have critiqued his lack of enthusiasm. Luginbuhl commented that he “would love it if he would say ‘Goooooood Morning Ironmen!’ He doesn’t have that [excitement].

Mr. Patrick Lawler, social studies teacher, shared his opinion saying: “[Chapman]  could use a little bit more enthusiasm. Bollmann on the announcements coming on was also so enthusiastic to crush people. He could pick up on that.”