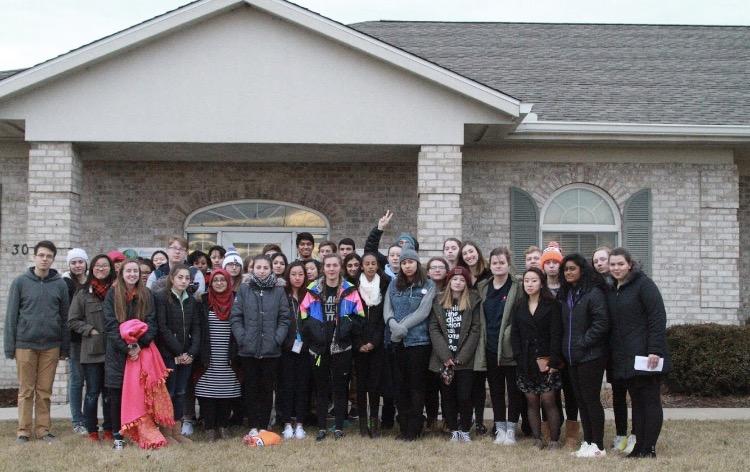 Over 50 NCHS students gathered at Congressman Darin LaHood’s office to express their disapproval of the immigration ban after school on Thursday, February 2.

Soon after President Trump released this executive order, Rep. LaHood released a statement supporting the order. He stated, “We are a compassionate immigrant nation for those looking to work hard, play by the rules and embrace

American ideals. However, we know that there are terrorist groups and entities that want to harm America, and they are looking to use our immigration system against us and hurt innocent people.  This action to strengthen our immigration vetting process as it relates to Syria and a small handful of other countries with a history of terrorist activity should be viewed as protecting our homeland and its citizens.”

As the representative for Illinois’ 18th congressional district, one of Rep. LaHood’s jobs is to hear and consider the voices of the people within his district so that he can effectively embody their opinions. Students from all grade levels gathered in Rep. LaHood’s office to express their opposition to the executive order. The students hoped to give the congressman a different perspective on the executive order, and to perhaps sway him.

Though Rep. LaHood was not present, students spoke with one of his staff members. To open the meeting, several students offered personal testimonies.

Carmen Cornejo, a junior, offered a personal testimony about her family’s Mexican heritage. The personal testimonies showed “how this [ban] actually affects people in our community”, she states.

Junior Halley Kirshenbaum also offered a testimony about her Jewish background, and voiced concern regarding the recent hate shown toward her group of people.

Cornejo and Kirshenbaum both urged the representative to consider the immigrants that have found opportunity and hope in America. They asked him to consider how the ban might affect those hoping to find that same opportunity in the coming years.

After listening to the students’ concerns, the staffer offered some insight into Rep. LaHood’s position. Students were able to respond and ask questions. The conversation lasted for a little under a half an hour.

Megan Moore, a junior, states that, “It was nice to feel heard, but he wasn’t able to give us many straightforward answers.” On a more positive side, she mentions that “a few hours after we visited he ended up tweeting a statement, so it was cool to feel like we had an impact.” (See his tweets here: https://twitter.com/RepLaHood?lang=en)

Though the students were unable to change the congressman’s opinion on the immigration executive order, the students that attended were able to effectively voice their opinion and raise awareness.

Cornejo states, “Solidarity shows, not only to Rep. LaHood, that we are serious and many people feel this way . . . many people are counting on Rep. LaHood to do his job of representing the feelings and beliefs of his people.”

Moore encourages students that want to get involved to “write or call their elected officials or attend local protests. . . to show solidarity for marginalized groups.”