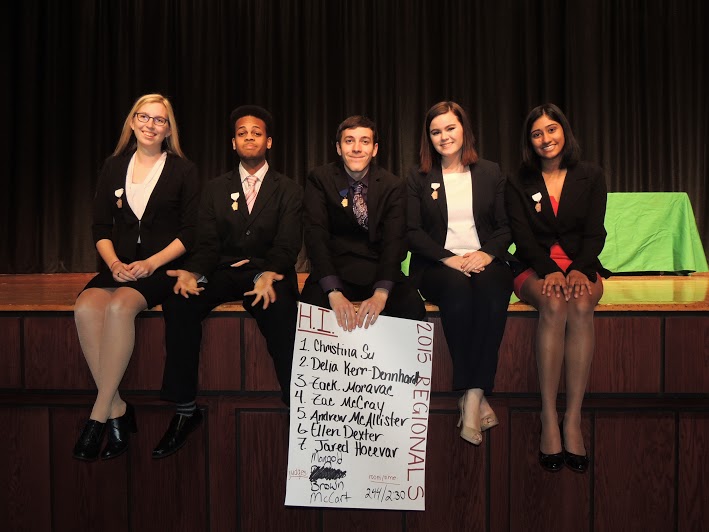 VanAntwerp, Campbell, Moravec, myself, and Penmetcha at the IHSA Regional Speech Tournament at U-High.

After months of hard work, early Saturday mornings, and many tournaments, three members of the NCHS Speech Team qualified for the IHSA State Final Tournament. These three members, Zack Moravec, Melvin Campbell, and Callie VanAntwerp traveled to Peoria on Friday and Saturday, February 20th and 21st,  to compete amongst performers from across the state.

Melvin Campbell has been a member of the speech team for four years and performed his Original Comedy piece called “Twigga Trouble”.

Zack Moravec, who has performed in multiple events including Prose, Original Comedy, and Humorous Interpretation. Moravec, who placed at every single Invitational, said that performing his Humorous Interpretation piece at state was “just like performing at any other tournament. Everyone is nervous because they know the stakes are higher, but it was fairly simple to stay focused on my speech. He added he “felt honored to have been alongside the best of the best”.

VanAntwerp performed an Original Oratory, a persuasive speech that addresses a problem, explores the causes, and proposes a solution, regarding asexuality awareness titled “Putting the A in Awareness”.

The 2014-2015 season ended with five members qualifying for Sectionals: Neharika Penmetcha in Impromptu (the event requires the competitor to prepare a six minute speech in two minutes), Zack Moravec in Humorous Interpretation, Melvin Campbell in Original Comedy, myself in Radio Speaking (delivering a five minute radio broadcast) and Callie VanAntwerp in Original Oratory. The three that advanced to state (Moravec, Campbell, and VanAntwerp) all placed within the top fifteen in the state.

So what makes going to state a big deal for the speech team? These members were the first to perform at the IHSA State Final in six years. The average tournament costs approximately five to six hundred dollars, so each Invitational takes it’s toll on the overall budget for the team. Despite doing multiple fundraisers throughout the year, the Speech team still has a tight budget because of funding cuts in 2013. So naturally, the NCHS Speech Team gets less practice at performing pieces at Invitationals.

With less tournaments available to attend, practice is the most important part for the Speech Team. Team members sign up to practice with Team Captains, Kelli Tilford and myself, and the two Coaches Kaitlyn Hoegger and Brian Clark. Tilford stated that practice between the Captains and members “allows the team to perform without getting too nervous” and that it “helps us [the team] become better performers in the rounds”. Coach Hoegger stated that in the future, she’d like to see even more members compete at the state level.