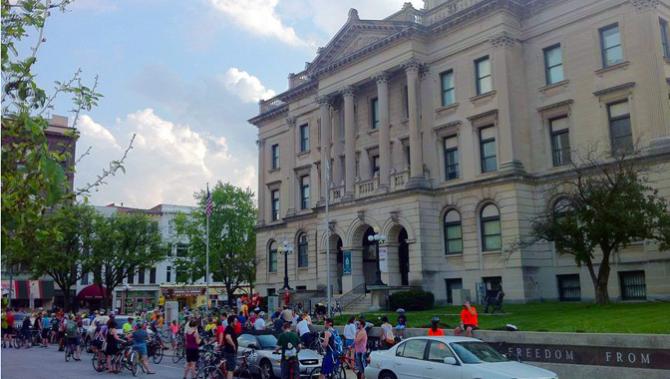 With the recent addition of bike lanes to Jersey Avenue in Normal and Front Street in Bloomington, the Bike Boulevard on Blair, and sharrows (street markings that identify shared lanes) placed around town, bike culture and safety are being recognized more prevalently in the Twin Cities. With commuting by bicycle increasing by over 40% annually in Illinois, both the town of Normal and the city of Bloomington are recognizing local cyclists.

Bloomington-Normal has saved over $90,000 in expenses and 149,346 lbs of carbon dioxide, while citizens burned almost 9 million calories. Furthermore, those who biked and tracked their milage rode 165,940 miles- or 6 times around the equator- surpassing their goal of 100,000 miles for the National Bike Challenge. Overall, Bike BloNo placed 6th in the entire nation with 271 riders.

Events like Light the Night, where free distribution of bike lights takes place in Uptown Normal and Bike 2 School, where more than 50 students and multiple Bike BloNo representatives made the trek to school via bicycle, have increased community awareness in the past few years.

NCHS even has their own bike club.

Furthermore, the McLean County Wheelers and Bike BloNo sponsored the Ride of Silence in downtown Bloomington in May where over 120 cyclists rode to honor cyclists killed on roadways.

Kevin Suess, who is not only a teacher at Normal Community but the Vice President of Bike BloNo, stated- “I think through advocacy efforts, we’ve seen a lot of progress in both the Town of Normal and the City of Bloomington. It’s really cool to see that stuff move forward.”

With it’s endless benefits, biking is quickly becoming a mainstream means of transport in the United States. The rate of people commuting via bike has increased anywhere from 30 to over 100% across the states and many cities are taking after European bike transits to encourage safety for both cyclists and motorists.

For example, the Divvy bike sharing system in Chicago has been widely popular. People who are 16 years or older simply find a station with a touchscreen kiosk, station map, and a docking system that unlocks bikes using a member key or code. With the ability to visually see bikes available at the city’s various stations on a tracking app, biking around the Windy City has never been easier.

“There are a bunch of benefits of bicycling. If you’re doing it for transportation, you’re saving money. You’re also getting healthier in the process, I think that’s a positive.” Suess added, “Bikes on the road are less impactful than automobiles in regards to the wear and tear of the roads. A little paint on the road to make the bike lanes is kind of offset in the end by some of the wear and tear from vehicles.”

With people acknowledging the benefits to biking, the community and the twin cities tackling problems at quick rate, the percentage of people commuting by bike is only going to grow in Bloomington-Normal.

“I think it’s an exciting time to live in Bloomington-Normal, we’re on the brink of some cool things. There’s a lot of younger people as well as older people biking. It’s neat to be a part of that throughout the community,” Suess stated.