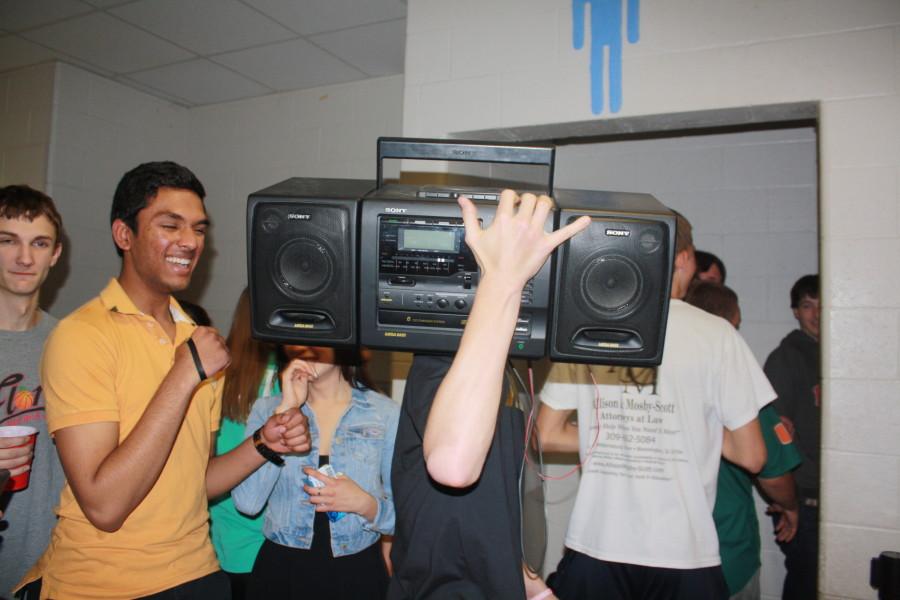 Austin Bloom (12) carrying a boombox into the bathroom

After senior pranks that seemed to fall a little flat (students parking in the staff lots or protesting in the atrium by not going to class) the senior class of 2014 was going to make sure that they were not forgotten.

In the boys’ bathroom located in the connecting hallway between the junior and senior sides of the school, students decided to throw themselves a 2 o’ clock bathroom party.

Contributions of pizza and soda were made, and someone even brought in a boombox.  Anyone walking by could tell that something big was going down, especially since there was a bouncer standing outside with a rope keeping people out if they were not a part of the senior class.

All sorts of crazy things that are usually identified with an insane teenage party went on in the cramped room.  There was crowd surfing, dancing, and the whole bunch chanting along to well-known songs, including “Aw Skeet Skeet”.  Of course, some teachers were spotted at the scene joining in on the fun as well, such as Mr. Lawler and Mr. Feeney.  Mr. Bollman allowed the party to go on for quite awhile by taking the party in with good spirits.

After breaking up, many students walked out of the bathroom smiling, laughing, and sweaty.  Many students attempted to go back to their eighth-hour class, yet were denied access back into the classroom. This sent a wave of students back to the bathroom, not exactly sure where to go then.

Austin Bloom (12) was then seen walking down the hallway with another boombox balancing on his shoulder.  With this, senior students rushed back into the bathroom and Mrs. Maurer allowed for this second party to continue on for a little while longer.

When the second party finally broke up for good, once again the flow of students was full of smiling and laughing and causing a cacophony.  Happy about making their imprint on the school that most have been in for all four years, many posed for pictures and seemed to look exhilarated at finally forming a senior prank that spread like wildfire and had students talking about it.