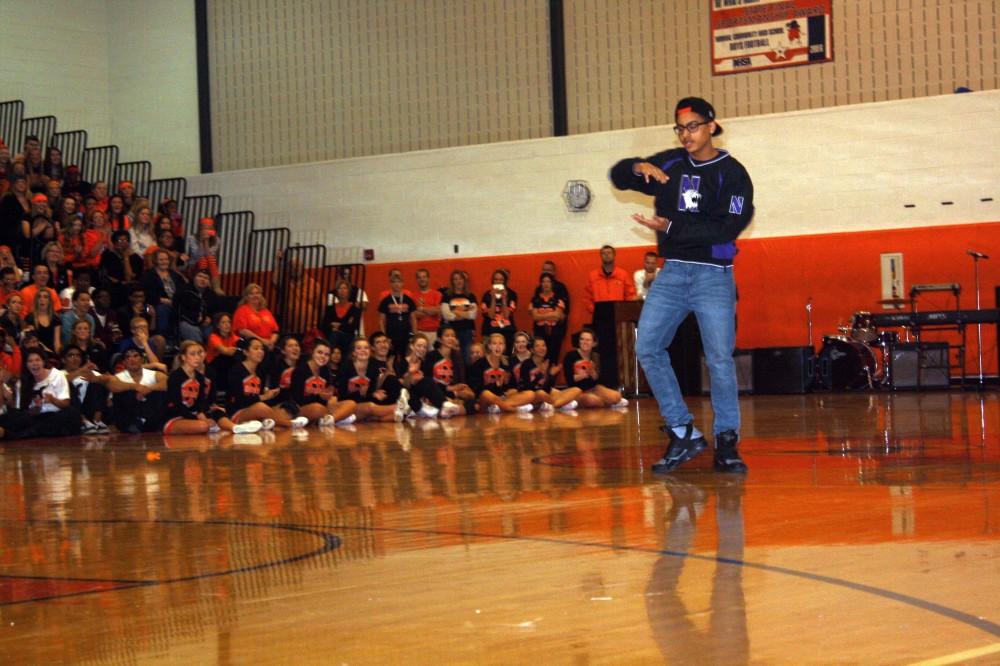 Jordan Stipp(10) performs a style of animation dance for the student body during the 2013 Homecoming assembly.

Jordan Stipp, sophomore, walked to the center of the gym on October 19th during the homecoming assembly. The music began, and he started dancing. Soon after – he had the crowd screaming.

Stipp has been dancing from a very young age. When he was eight years old, he saw Breakin’, the 1984 dance movie. He talks about how after he saw actor Michael Chambers dancing in the film, he “couldn’t help but want to be him.”

Ever since then, Stipp has regarded Michael Chambers as an inspiration for his dancing, a style called animation. This style of dance involves vivid and awe-inspiring movements made my quickly contracting and relaxing the muscles – imitating the somewhat robotic moves of stop motion animation.

Animation looks best with the diverse sounds found in dubstep, a fairly new genre of electronic music. Stipp likes to dance to dubstep, but he doesn’t just stay confined to the one genre; he says, “hip-hop is… the best choice for me, along with dubstep.”

One of Stipp’s biggest dancing milestones was reached when he uploaded his first dance video to YouTube in the summer of 2013. He was outside with his dad and began shooting, when, he says, “I felt rain drops on my face. I didn’t want it to rain; I thought the video was ruined.”

However, his dad told him to keep dancing. Stipp filmed the video in the rain, and it turned out “pretty amazing” to him. When last checked, the video had 2,800 views.

Stipp hopes to continue to dance for as long as he can, but only as a hobby. “If I were to pursue a career in dancing, I would have to live without money for a long time, and I don’t like the sound of that,” he says humorously. Although, if a good opportunity were presented to him, he would “most definitely take it.”

Stipp encourages everyone who is interested in dancing, as he believes everyone can dance. “However,” he says with a laugh, “some can dance better than others.”