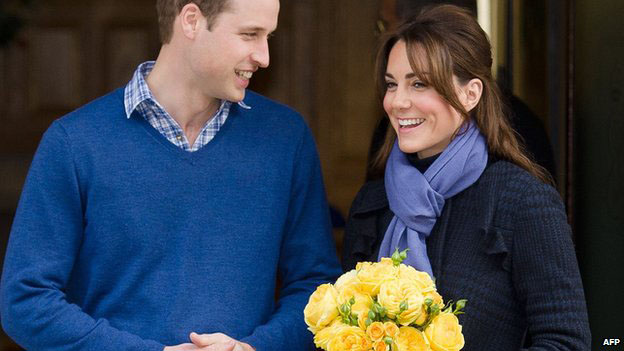 The Duke and Duchess of Cambridge leaving the hospital.

The Duke and Duchess of Cambridge announced their pregnancy Monday afternoon. Prince William, second in line to the throne, and wife Kate Middleton revealed the news of a royal baby just a year and a half after their marriage.

The Palace released news of the baby in the very early stages of Kate’s pregnancy due to complications she is facing. USA Today reports Middleton was admitted to he hospital for Hyperemesis Gravidarum, a severe form of morning sickness, after becoming sick at her parent’s home in Berkshire this past weekend.

As many have speculated, there will not be any controversy over the child’s ability to rule due to the gender law being changed. Previously, English law prevented women from being in line to the throne. Due to recent Parliamentary changes, William and Kate’s first child will follow in line to the throne without doubt.

ABC News released, while Kate recovering in the hospital, that radio hosts from “2dayFM” called the hospital impersonating Queen Elizabeth and Prince Charles. The hospital revealed information about the duchess’ condition violating the patient doctor confidentiality agreement. The radio station releases a statement apologizing for any inconveniences caused. It was later reported via the Washington post however that the nurse responsible for the information leak committed suicide Friday morning.

The Washington post, speculates that the nurse committed suicide due to the guilt of violating the royal family’s privacy. They also noted that the nurse was a single mother with a long commute to work. Another speculation the Washington Post made was that she felt “lonely and confused” as a result of what happened.

Despite the events surrounding the royal pregnancy, many celebrities have tweeted their well wishes and excitement to the royal couple. The announcement immediately led to a worldwide Twitter trending topic (#royalbaby).

The Duchess was released Thursday morning and is expected to continue resting and recuperating. More news in the months to come will reveal the baby’s gender and more details about the royal pregnancy.