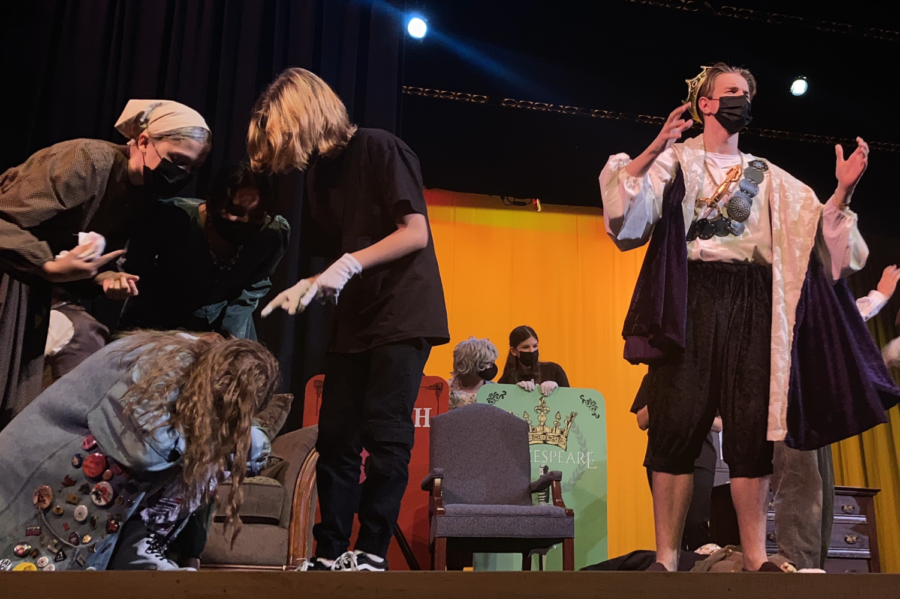 Chaos ensues on stage as the seven mini-plays collide towards the end of the show.

80 minutes, give or take, is the time it takes to watch two episodes of Netflix’s “Squid Game,” ½ of “Titanic,” or to listen to 25 Taylor Swift songs.

Those 80 minutes would have been much better spent watching the Theatre program’s fall play “Zap!,” which opened on Friday, Oct. 15, and closed its five-show run on Saturday, Oct. 23.

“Zap!” catered to modern attention spans, allowing the audience to “zap” from one play to the next. The show offered seven plays, seven genres, and 80 minutes of laughter — from the occasional chuckle to side splitters — all packed into one performance.

While some of “Zap!’s” humor derives from mocking those seven genres and the fact the show is full of slapstick comedy, what made the humor really hit the audience was the cast’s acting and delivery.

Through the combination of the cast’s performances, the surrealism of breaking the 4th wall, and the physical comedy throughout, “Zap!” never bored the audience.

Megan Parent’s (’22) performance as Emmaline Gray set the tone for the night with the panicked-yet-hilarious interplay between Gray and junior Corban Belle’s Beeton, the butler.

As soon as the theater lights came on, the stage was chaotic and the performance fast-paced.

Each time Emmaline called for Beeton, the audience could practically see the fear in Parent’s eyes. Emmaline wished for the house to be perfect before her husband’s return from WWI. He was due home any minute and the house was still full of reminders of the war.

Beeton faced a difficult task — there could be nothing colored red (like blood) on the menu, absolutely no gunshot-like sounds of “dropped pots and slammed doors,” and nothing French for dinner whatsoever.

With the increasingly absurd requests, Beeton’s response was the same, a deadpan “Yes, Madame.”

“The Comedy,” about the unfortunate circumstances of life as a writer in the Big Apple, was full of witty banter and physical comedy.

Seniors Andrew Short’s Irv Weinstein, “an honest Buddhist philanthropist,” and Ethan Scott’s Sammy had great one liners throughout the night.

Weinstein recruited his best friend Sammy to be his flirting tutor, and while Sammy may not know “a cerebellum from a softball” or the difference between “paganism” and “plagiarism,” he sure can flirt.

Avrille Jorolan’s (’22) debut performance as Audrey, the wife of Weinstein’s enemy and his “love interest”, was one of the night’s standouts. Jorolan’s commitment to physical comedy had the audience believing she o-fish-ally drank water from a fish tank.

Short too wasted no time jumping right into the play by, well, a literal jump to end the polka-music peril of his downstairs neighbor.

A high school theater experience is simply incomplete without Shakespeare. Thanks to the third play of the night, “Shakespeare’s Richard III,” starring Tim Schill (’22) as Richard, the audience left satisfied.

Desperate to finish his performance, Schill displayed seemingly genuine anger as his role was “zapped” off stage. Schill was a delight, leaving the audience longing for him to have a chance to finish his beloved horse speech.

Schill’s commitment to the more physical aspects of his role, including his hunched shoulder and exaggerated Shakespearean accent, enriched his already over the top performance. From offstage killings to phone throwings, Schill was a crowd favorite.

From 1400s England to 1880s Russia — “The Russian Play” was a comedic drama in which a couple moves home to their multi-generation family. A family which includes a suicidal grandfather, a flirtatious cousin, and a chronically ill aunt.

Somya Jha (’22) and Nick Baca (’23) starred as Irina and Nikolai, respectively. With complete opposite views on their move back home, the pair’s fights had a lot of room for jokes. Nikolai may believe their time in the country side shall have them “both be reborn”, but to Irina the house has nothing more than a “tradition of tasteless furnishings” and a hatred of the cook that appears to “not have washed her hands in a month.”

Jha’s character may have been made up entirely of plastic, but her mastery of body language had the audience laughing with no words spoken. When Nikolai received his “How to Care for Beets 101” lesson, Irina’s obvious struggle to stay awake was the real focus.

Nothing could beet sophomore Ani Abbina’s Konstantin and his portrayal of a 137-year-old beet-loving yet self-hating, slow-paced grandfather. He truly deserved three whole zaps just to finish his incredibly slow stroll across stage.

“The Performance Art Monologue” was the night’s most unique play as a performer, played by senior Ivy Goeckner, critiqued theatre traditions through a series of monologues.

Goeckner’s energy fit the role of eccentric and “totally weird” Marsha (or Atlantis if her mother had filled out the darn legal papers.)

Goeckner sustained the audience’s attention through her skateboarding antics, occasional calling out of audience members, and commentary on the other plays and actors. Her passion for telling the truth and nothing but the truth was just what 2021 needed.

“The Avante-Garde Play” was about a strange man and woman who find their hotel stay to be average at best (considering there’s a dead body in their room.)

As the title suggests, this play was certainly abstract, from invisible yarn to Chihuahua inspired jealousy, but Zach Bacon (‘22) as Man and Amelia Lau (‘22) as Woman made it all seem entirely… normal. Their “avant-garde” performance with monotone delivery and classic love between a husband and wife made the audience forgot about the dead body in the the room. They had the audience dying of laughter with only their facial expressions, from wide eyes to disappointed stares.

Moving from one dead body to another in “The Southern Play,” about a Tennessee Williams-inspired story involving missing money, strange family dynamics and drinking the troubles away.

Freshman Mimi Calmes’ panicked interaction as Caroline with “The English Mystery’s” Emmaline Gray were met with giggles as it was one of the first intersections of the plays.

The finale, with all seven plays on stage at once battling for the spotlight, matched the chaos of the rest of the night making it an extremely fitting end.

The tech crew never missed a cue, from sudden lighting changes, random polka music, or thunderous sound effects for dramatic flair. The ensemble outdid themselves by adding humor to the already hilarious show with their TicTac calls, and army crawling across the stage to not so discreetly move props.

However, the real star of the night may have been the mannequin that played the corpse of multiple bodies such as Konstantin in “The Russian Play” and Grandmammy in “The Southern Play.”

Although the play’s script may have been complex at times and the performers’ masks didn’t ease understanding, the Theatre program ultimately made the play an eventful 80 minutes — sorry T. Swift… this is a better use of time.