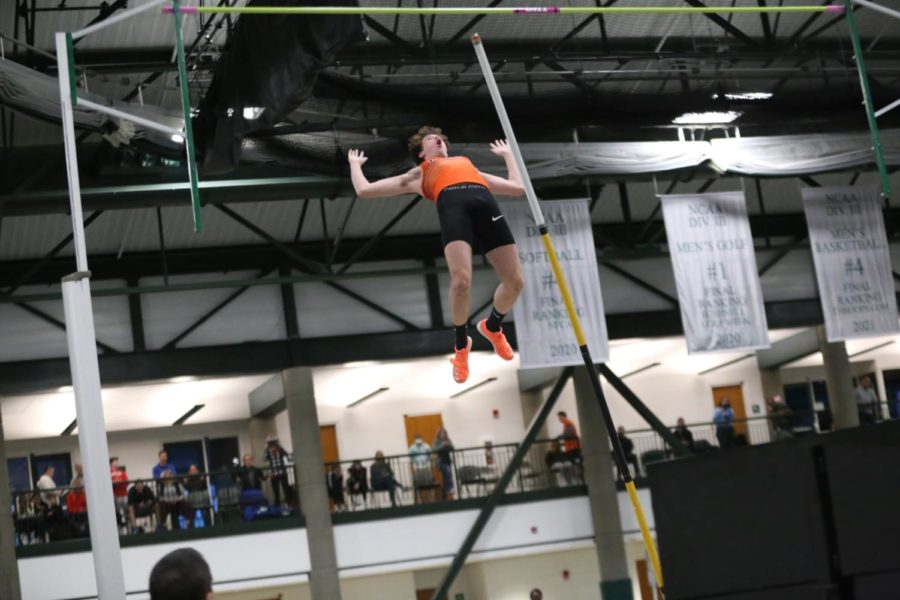 For 33 years, Community’s boys track and field pole vault record stood at 15 feet, 6 3/4 inches, until Charles Cruse, then a junior, jumped 15 feet, 7 inches — breaking the record by a quarter of an inch.

That was nearly a year ago, and Cruse keeps jumping higher.

In one of the first indoor meets of his senior season, Cruse shattered his record, jumping sixteen feet at the Windy City Pole Vault Summit at Rolling Meadows High School on March 5.

That jump put Cruse on the podium — taking first in the meet — and landed him first in Illinois high school pole vault rankings, according to Athletic.net.

At 13, after a year of training, Cruse earned recognition for vaulting 8’6″, earning gold at the 2017 AAU Junior Olympic Games.

Each of the past seven years, Cruse has added about a foot and a half of height to his vaults.

Cruse is well-versed in economic concepts like inflation — the senior plans to major in finance next year at Illinois State, where he will continue his track and field career. Still, there are more credible explanations for his yearly improvement.

Cruse began working out with Cockerham as a 7th grader at Evans Junior High and got right down to business on getting better.

“He understood what I was trying to tell him,” Cockerham said. He “understood that he had to learn to get better. He busted his butt to get where he is today.”

Cockerham and the Flying Dragon’s staff know a thing or two about what makes an elite pole vaulter.

Since the club opened 25 years ago, over 300 Flying Dragons have gone on to compete at the collegiate level, receiving over $13 million in scholarship money along the way.

Cruse cites the consistency of being able to train year-round with the Flying Dragons for his continued improvement.

“For the past seven years,” Cruse said, “I’ve gone to the same place, doing the same thing, at the same time, four times a week.”

“Charles had some goals that he wanted to accomplish, one was the school record, and he got it done,” Thomas said. “He is a very determined athlete.”

Pole Vault, Cockerham believes, is “the third hardest sport” — one that “the laws of physics mak[e] impossible.”

Yet Cruse’s hours at the Flying Dragons have made vaulting feel almost automatic for Cruse.

“It’s all muscle memory,” Cruse said. “You plant in the box, and then you’re laying down on the mat.”

In the final indoor meet of the year, Cruse again, vaulted a new personal record — clearing sixteen feet, one inch, earning first-place at the Illinois Top Times Championships on March 26 and MileSplitIL.com’s performer of the week.

Cruse sprinted to friends waiting outside the pit following the record jump, celebrating and enjoying the moment — the action a testament to Cruse’s impact outside the pole vault pit.

Three years ago, the Flying Dragon’s graduating captains elected Cruse to succeed them, an honor that was a challenge at first.

“At the beginning, he was very shy . . . very bashful . . . not very outgoing,” Cockerham said. “But he took the challenge, and very quickly, his entire attitude changed.”

“The guy is phenomenal,” Cockerham said. “He runs [the gym] when I’m not here. He locks the door. He shuts the lights off. He runs workouts on his own. I gave him some workout plans. He adapted them. Kids come in and work out with him. The young man is amazing, his future is unlimited.”

“Charles, without question, is one of the most outstanding young men I have ever coached,” Cockerham said.

That isn’t just mouth service either — Cruse led the Flying Dragon’s practice while Cockerham participated in the interview for this article.

When Cockerham talks about Cruse, he calls him “our captain,” a fitting title for an athlete that has gone above and beyond the bar of expectations.

Although Cruse spends most practices participating in specialized training at Flying Dragons, Thomas says he is well-respected by the team’s underclassmen.

“It’s his presence,” Thomas said, “most days, he walks in with a shirt and tie on — it’s strictly business.” Come competition day, “they see him dressed head to toe in Normal Community gear. . . they see him as a leader no doubt.”

That leadership, that sustained success, that strictly business mentality all set high expectations for Cruse and the track team.

“I think if we were less than the top five at the state track meet,” Thomas said, “it might be disappointing.”

But despite the expectations, the high praises and all of the hype Cruse’s new heights generate — there is still nothing better than a successful jump.

“That thrill of seeing the bar on the pegs once you’re back down on the mat…,” Cruse said — there’s “nothing else like it.”