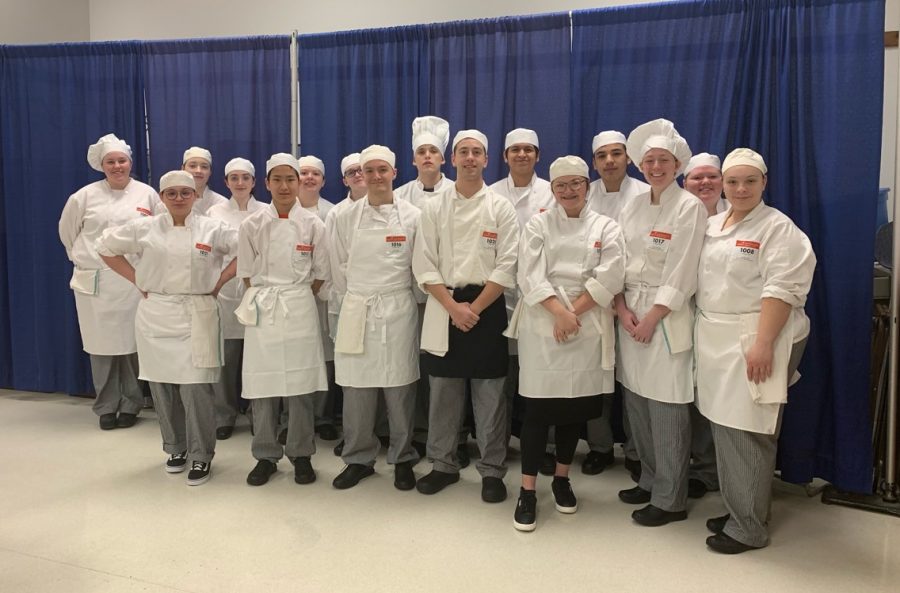 The four were first-time competitors at the contest hosted by SkillsUSA, an organization that grants students the opportunity to demonstrate their technical skills, while also allowing them to gain potential career experience.

The State competition, scheduled to be held on April 24 and 25, was canceled due to COVID-19.

Gavin Reighner and Madelyn Burton showcased their skills in the cooking event, placing 2nd and 3rd, respectively, after preparing chicken parmesan and linguine alongside five other contenders.

Emma Feit and Kennedy Coe placed 1st and 3rd, respectively, out of a group of 13 bakers after decorating a cake, baking blueberry muffins, and preparing two pie crusts.

Despite facing more experienced competition, according to Feit, the four have a deeply-rooted passion for the culinary arts that allowed them to persevere. Their preparation was a key ingredient to their success and began weeks before Regionals.

Mrs. Kitty Besley, the competitors’ culinary instructor at the Bloomington Area Career Center, enabled the aspiring chefs and bakers to handle the stress of the competition.

Besley provided her students with tips about how to work efficiently to improve their cooking or baking as they went through the recipes to ensure that unnecessary points weren’t lost for precision and detail, factors that affect a competitor’s placement, Coe said.

To improve their organizational skills, Beasley also brought in a professional chef, who helped the students review recipes and determine the order they would be competing in.

Their extensive preparation paid off after multiple problems arose during the competition, relating to ingredient availability and equipment malfunctions.

Not only were the burners and ovens not working properly during the cooking event, but all of the expected ingredients were not present during both the cooking and baking events, including basil, baking powder, and icing.

The four adapted as the problems arose. Instead of struggling, they persevered because of the worst-case scenario run-throughs Besley had led, which “made the actual competition that much easier,” Coe said.

The comradery among the competitors, Feit said, allowed her to remain focused on “nailing in all the details.”

After placing in Regionals, the four were excited for the State competition scheduled to be held in Springfield.

Due to the Coronavirus, SkillsUSA Illinois made the difficult decision to cancel the Springfield events.

“SkillsUSA Illinois is committed to providing an experience to our membership,” which is why the organization will “explore a Virtual Championship.”

To ensure students’ safety, BACC has chosen not to participate in the 2020 SkillsUSA modified Leadership Conference. While recognizing the disappointment that will result, BACC shared the immense level of pride felt toward their students and their preparation for the competition.

“This set back is temporary, and we look forward to working with our SkillsUSA students in the 2020-2021 school year,” a statement released by the BACC said.

While students are upset that they won’t be able to participate in the State competition, they understand the need to protect everyone’s health and are looking forward to future opportunities to showcase their cooking and baking skills.

“I’m ready for next year to prepare and do even better in regionals, and I’m looking forward to state next year,” Burton said.

Despite being unable to compete in State and having no access to the school’s resources, the BACC students are continuing to hone their skills at home.

Coe has been “baking and cooking for fun,” in addition to continuing online learning through the BACC, which is keeping them busy by “watch[ing] videos on cooking skills and turn[ing] in worksheets.”

Although the State qualifiers are putting their extra time at home to use in the kitchen, the group cannot deny their disappointment after the time spent in preparation for Regionals.

Unlike his three peers, this year was Regnier’s last opportunity to showcase his culinary skills at the SkillsUSA competition.

“I’ve always wanted to compete, and culinary is something I want to do as a career, and something I’m going to pursue,” Regnier said.

Coe, Burton, and Feit plan to continue their culinary pursuits at BACC next year as they compete alongside others, experiencing the thrill of competing for their senior year.

“There is something unexplainable about the feeling of seeing something through to the end, especially when you are proud of the work you’ve done,” Coe said.