An ongoing love: Bradshaw to retire after fostering learning at NCHS 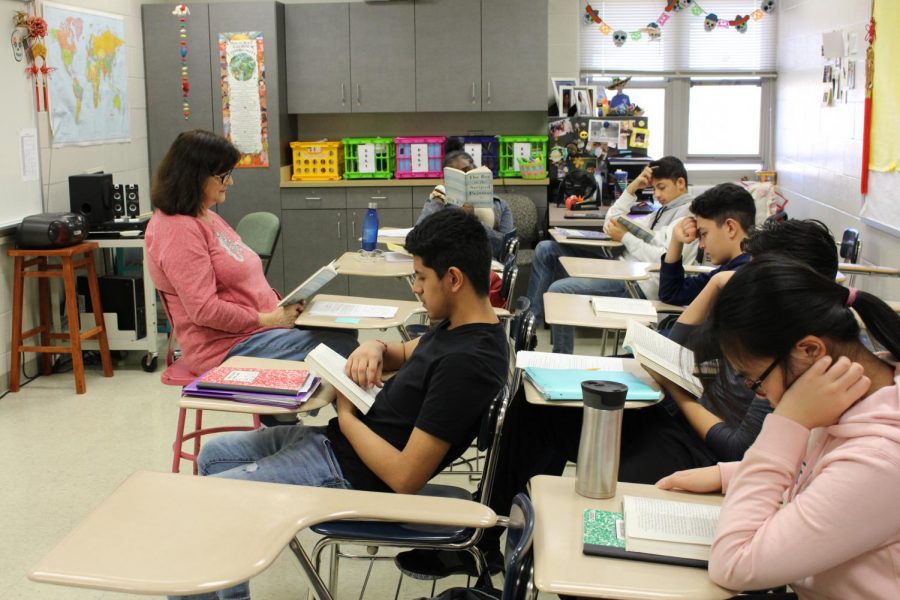 Bradshaw reads aloud from the novel "The Boy in the Striped Pajamas" by John Boyne as her students follow along.

In a classroom, two students — one wearing shiny white shoes, the other wearing worn down muddy sneakers – race to the front board to answer a question, attempting to win a point for their team in a test review game. Their classmates, some standing on top of desks, watch from the back of the room clapping and encouraging.

In a classroom, a small group of students sit quietly in their seats reading from yellowed library books – the turning of pages crinkle as one of the students sitting in the corner of the room dozes off to sleep.

In a classroom, a little further down the hall, a girl presents her Powerpoint on civil engineering in front of her class – the faces of peers staring back at her, creating the feeling that their laser eyes are burning holes into her skin.

Some classes fill all of the manila colored desks in the room, others only a few. Some classes listen as a teacher lectures, others participate in interactive group work. Some classes create and build new designs and works of art, others analyze and comprehend the work of famous poets and novelists.

Over 130 different full-time teachers make up the teaching staff at NCHS, each with their own unique teaching style. Eight different hallways, compose the school’s layout, each containing different classrooms. Over 2,000 different students makeup the student body, each carrying their own interests and beliefs.

But there is something about Ms. Annette Bradshaw’s classroom that is unlike other classes. Her students are grouped together for a reason. They have one difference in common.

Daily greetings said in Spanish. Friday excitements in French.  Monday mournings in Vietnamese. Students from all over the world, now a part of the NCHS student body, come together to learn one language: English.

Bradshaw, an ESL teacher of 14 years at NCHS, co-teaches in classrooms across the school, crossing between department boundaries, acclimating herself to subjects in Drivers Education to Biology to American History.

But after this school year the days of coming in and out of classroom doors, teaching students from across the world, will be coming to an end as Bradshaw enters retirement.

Teaching ESL has given Brashaw appreciation for the quote by British teacher turned novelist, H.G. Wells, saying, “our true nationality is mankind.”

Within her years at NCHS, Bradshaw has seen students arrive from Vietnam to Nicaragua, all different – but similar to the manila colored desks that remain constant in every vastly different classroom and the identical whiteboards used by contrasting teachers that hang on virtually every classroom wall, there are core commonalities that members of humanity share. Bradshaw has found that her students, no matter what oceans they crossed or borders they passed, all crave the same things: “love, acceptance, security.”

Bradshaw keeps those core values in mind while working with her students.

Working with the students who are still in the process of mastering English, “my number one job is to be an advocate for them,” Bradshaw said. Talking to other teachers when a student is struggling in a class, making sure the student has the means to be successful are in the fine print of ESL teaching that Bradshaw fulfills.

“She cares deeply for her students and their success,” Jason Sapranek, an ESL colleague of Bradshaw, said.

Bradshaw has helped students with anything from filling out graduation cap and gown forms to acquiring students PE clothes.

“You really get to know [the students],” Bradshaw said, “when you see them over and over, year after year.” Bradshaw will see some of her students two or three times a day depending on how much ESL support the student is receiving. This gives Bradshaw the opportunity to form rare relationships with her students that many other teachers don’t get the chance to make.

“She loves to joke around with [her students],” Christina Nutter, ESL department chair, said. “The kids all know her because of her signature laugh.”

But Bradshaw’s experience working with students from across the world didn’t just begin in the halls of Normal Community. Before she arrived at NCHS she spent time similar to her students now – in a foreign country knowing little of the culture and little of the language, touring for the Peace Corps, a US service organization that volunteers in countries across the world.

It has been 29 years since Ms. Annette Bradshaw’s tour with The Peace Corps in Gabon, Africa has ended, but back in the States – discluding the rainforest landscape and hot climate – not much has changed.

“I am carrying on those three [Peace Corps] goals,” Bradshaw said, “working with the international students.”

Every day bringing glimpses of her students’ cultures, like learning that in the Congo goats are used as offerings for marriage but in America where there are no goats to exchange some Congolese offer money.

Despite the different cultural customs, Bradshaw and her students still find a way to connect: humanity.

Bradshaw also teaches her students the novels Night by Elie Wiesel and Speak by Laurie Halse Anderson, books she believes her students can have a connection to.

“I feel like the choices I make with the readings,” Bradshaw said, “[my students] can relate to, so that’s very interesting to them.”

In attempts of keeping her student interested Bradshaw will also “try to mix it up” when it comes to lesson planning.

When she is teaching her students grammar, she isn’t just preaching from the front of the room. She’s having her students create presentations, complete activities that go along with a song or a movie, or follow the dialogue of a narrative.

“She brings new experiences to the class,” Nutter said.

When her students were learning about Fat Tuesday many of her students had never experienced that celebration before, Nutter shared, so Bradshaw brought in King Cake, a common Mardi Gras dish, for her students to try.

All in hopes of fostering “an ongoing love of learning,” in her students, whether that is for English or just in general– a goal Bradshaw hopes to achieve with all of her students.

Reflecting on the words of Mahatma Gandhi, Bradshaw’s second favorite quote, “live as if you were to die tomorrow. Learn as if you were to live forever.” Bradshaw doesn’t want her student’s learning to end when they leave her class, she wants them to keep expanding their knowledge wherever they go.

“When I see these kids,” Bradshaw said, “who have really struggled through some of their classes and the culture and making friends and fitting in, graduate and move on to go to Heartland or ISU or even get jobs or enter into some training program,” that is what brings her the most joy.

As Bradshaw enters retirement one of her plans is to embrace her own “ongoing love of learning” and re-enter the classroom – this time as a student – taking continued education classes in basic art, crocheting, photography, etc., following the advice she gives her own students: “No matter what it is, whatever kind of skill, it doesn’t necessarily have to be English, but just learn something every day and expand your horizons.”

However, when stopping to look at Ms. Annette Bradshaw’s class, there will be students from all over the world. From Iran to Mexico to Angola and many more, with different homelands and mother tongues all brought together by their pursuit of knowledge: to learn English.