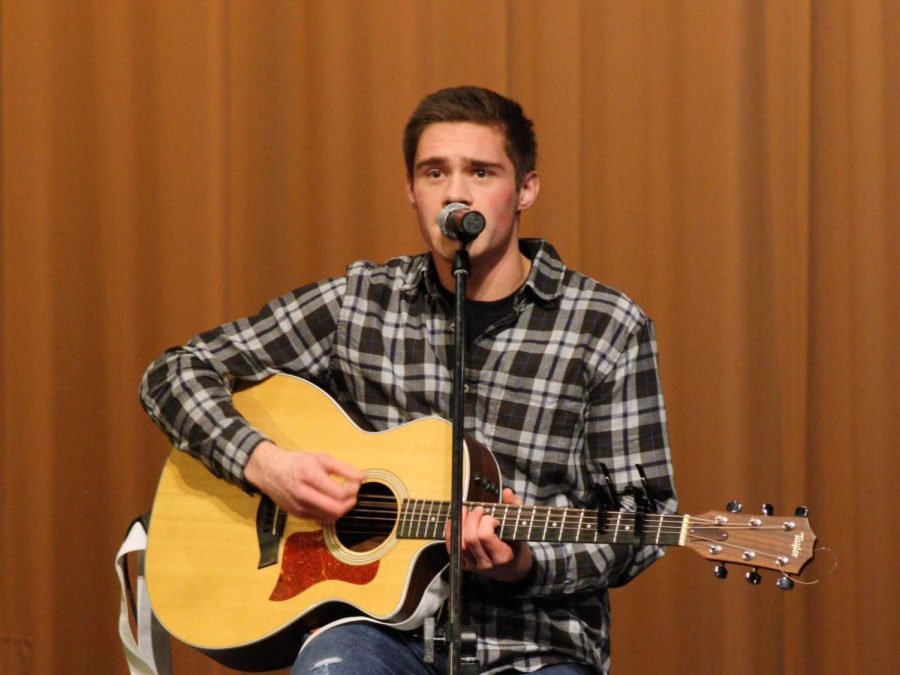 Cooper Smith, class of 2017, performs in Iron's Got Talent during his senior year.

Cooper Smith has been hard at work since walking across the stage at Grossinger Arena, receiving his diploma in the spring of 2017. Since leaving Normal, Smith has set his sights on other stages – as he pursues his college degree and works to get his start in the music industry.

Smith attends Lincoln Christian University, where he is studying worship ministry. Smith frequently performs at Eastview Christian Church, as a part of their worship band.

Attending a Christian university and singing at a church would seemingly make it obvious what type of music Smith is creating. But he doesn’t define himself as a Christian artist: “My songs … overall [have] like a pop singer, songwriter feel,” Smith said.

During his freshman year at LCU, Smith released his first single, “What Else to Do”, which has now garnered over 7,500 listens on Spotify. Busy with school, and touring with the Christian organization Christ in Youth (CiY), it was nearly 11 months until Smith released his next song.

“Falling for You” received an exceptional response and broke through 100,000 listens. Exactly a year after “What Else to Do” Smith went on to release his third single, “Who I’m Not”. With three singles under his belt, Smith is developing a name for himself – averaging over 4,o00 listens a month with a catalog of only three songs.

All of these will come together as part of an EP entitled Letters, to be released February 15. The name stems from the concept that every song on the EP is a letter, each to a different recipient. As for whose these recipients are, Smith named just a few. A girl, an unborn sibling, as well as one to God.

Flashing back to his time at NCHS, Smith very involved. Smith was a member of the track team, choir, and the leader of a morning prayer group. Reflecting on his high school years, “I would say that one of my favorite memories is cracking 21 feet in long jump at sectionals, that was special,” said Smith.

But today, Smith is focused on writing tracks, not running on them. Smith is excited for what is to come in his musical career; in addition to his upcoming EP, Smith has an entirely new song unrelated to the project. The producer of this new track, who Smith opted not to name is, “trying to do this full time, so he does a really good job.”  Smith went on to mention that this producer has worked with a few recognizable artists in the music industry.

Smith has shown he could be successful in what can be a tough industry. It won’t be long before he is back in front of a packed arena, however next time he won’t be receiving a diploma.