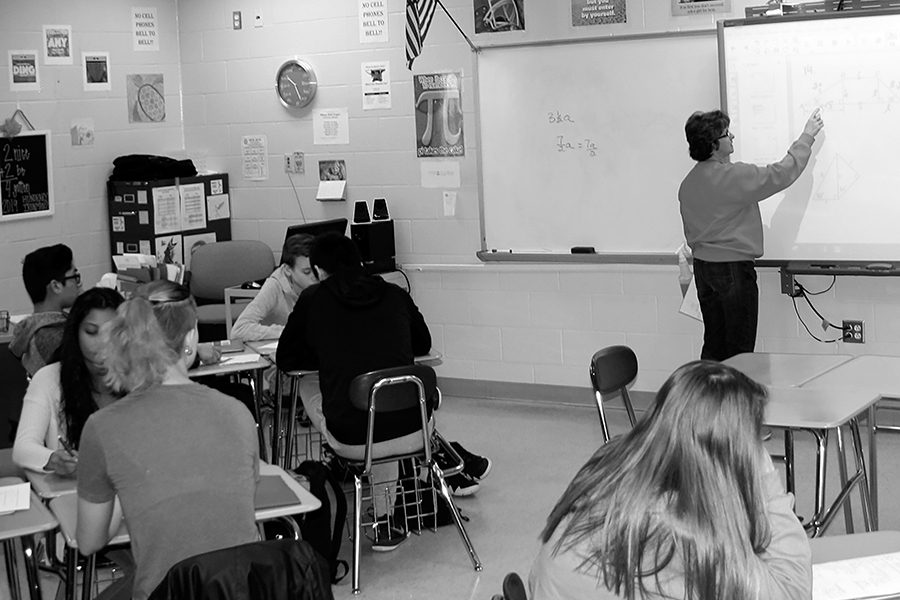 Mrs. Cathe Carter reviews a problem on the SmartBoard in her 3rd hour Honors Geometry class during her last semester teaching at NCHS.

The teacher stands in front of the class. The students in their desks. The teacher explains a proof on the similarities of triangles. It’s a typical Monday morning. The walls of the classroom are decorated with student tessellation projects and PI day tissue boxes. Most math classes at NCHS are the same. The same formulas. The same rules. The same patterns. But one thing about this class is different. One thing about this class could not be found anywhere another than NCHS. The students, some half asleep, others rushing to scribble down the writing on the board, all suddenly jump in their seats. The teacher yells one of her many catchphrases: “PERPENDICULAR LINES– DING.” What makes this class so unique is the person leading it – Mrs. Cathe Carter.

In May, after 30 years of teaching math and filling her classroom with positivity and laughter, Carter will be retiring.

Carter spent those years on working to make a subject that high school students often may think of as boring and difficult more bearable.

“It’s all about the way [a student’s] mind is set walking into the room,” Carter said. “Are they happy to come into the classroom or are they dreading it? I never want anyone to dread my class.”

“Math is hard for some kids,” Carter acknowledged, “so I use funny things to trigger in their mind what to do.”

“You can tell she really cares about her students and their learning,” Ellie Thompson, a former student of Carter said. Thompson saw Carter as someone who was always enthusiastic and kind in the classroom.

But Carter’s experiences in life haven’t always been as cheery as her personality.

In 2007, Carter took a leave of absence when her middle school daughter, Haley, was diagnosed with osteosarcoma, a form of bone cancer.

A diagnosis that Carter’s son, Austin, had received as well.

After a four year leave, Carter returned to NCHS in 2011, with Austin joining her the following year as a freshman, and Haley, attending NCHS beginning in 2013.

Carter credits St. Jude with helping her children obtain cancer free diagnoses. Her appreciation of the organization is evident – Carter sponsors the St. Jude club at NCHS which works to source donations and support for the children’s research hospital.

In 2012, Carter was at NCHS when the shooting incident occurred at the school. She had just walked into the Math department office when she heard screams.

At first, Carter didn’t think much of the screams assuming that it was just coming from the lunch room until she heard “code red” being blared over the intercom.

Through the Math department window, Carter “saw kids running from the school and the police all coming… with guns.”

Not only was Carter experiencing an event a vast majority of other teachers will hopefully never experience, she was experiencing it as a mother with a child in the building. While no one was physically injured in the event, but this is still a vivid memory of Carter’s teaching career.

Yet, despite the trials in Carter’s life, she has remained, in her student’s eyes, a positive person.

Carter’s positivity is what always stood out to Abigail Lemons, a former student of the math teacher.

But NCHS almost missed out on having Carter as a beacon of positivity in the school, if it wasn’t for a professor at Western Illinois University, the college Carter attended.

Entering college, Carter was planning to become an accountant. But she soon realized that the business side of the job wasn’t for her. She loved the numbers but that world didn’t suit her.

One day after class, Carter’s professor pulled her aside and told her she should be a math teacher. Carter’s original reaction was, “really you want me to teach math?” But 30 years later and Carter hasn’t regretted her decision.

“This has been such a great job and been very rewarding. I love running into kids at Walmart or them coming back” and hearing them “saying ‘thank you for helping me,’” Carter said.

Carter entered into teaching because she wanted to make a difference. A difference in how students view and learn math.

She knew the stereotypes, math was boring and hard, and she came to break the mold.

Carter wanted her students to be able to say, “‘Oh, I am going to Mrs. Carter’s class, rather than ‘Ugh, I’m going to math.’”

For 30 years, Carter’s life has revolved around students and numbers. But the thing about numbers is that they are endless, and the thing about students is they never forget the ones that leave an impact. Carter may be retiring, but it isn’t an end for her because opportunities are infinite. And It isn’t a goodbye either because her impact will continue to live on through the lives of her students.

This story originally appeared in the February 2019 print edition of the Inkspot.