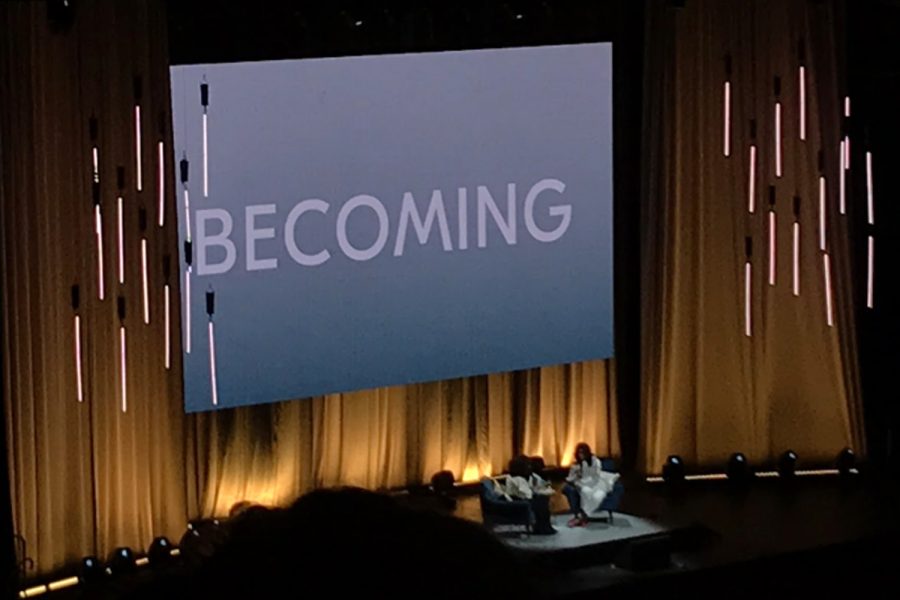 Michelle Obama and Oprah Winfrey on stage in Chicago at the United Center as they discuss Obama’s new memoir.

These were the emotions in the air as a once in a lifetime event at the United Center was about to begin. Audience anticipation was high as former First Lady Michelle Obama and cultural icon Oprah Winfrey were about to take the stage at the sold-out Chicago leg of the Becoming book tour on November 13, the same day Obama’s book hit shelves. The pair were set to promote Obama’s memoir, which in just 15 days became the best selling book of 2018, according to NPD BookScan data. During the two hour event, Obama’s focus ranged from taking piano lessons from her Aunt, becoming a lawyer and life in the White House.

As the crowd’s anticipation rose, a montage of Obama’s various talk show appearances was showcased: from Carpool Karaoke with James Corden, the infamous push-up contest against Ellen DeGeneres, and Evolution of Mom-dancing alongside Jimmy Fallon.

As talk show host Oprah Winfrey took the stage before a roaring audience, she warmly thanked the crowd: “You all being here is a testament to light,” Winfrey said. Michelle Obama soon joined Winfrey on stage, continuing this message throughout the night and left the audience feeling inspired.

Obama’s tour will take her to 32 cities to discuss Becoming, which focuses on the author’s life, from her childhood to her eight years as First Lady in the White House.

“You opened yourself up, allowed us to come in,” said Winfrey to Obama.

Obama discussed her experiences growing up in Chicago, attending Princeton University, and the challenges of living in the White House, but ultimately her theme was staying positive.

In 2016, Obama’s well-known saying of “When they go low, we go high” was born. Obama meant that when people choose to be negative, others should choose to take the high road and be positive. This ideology was born when Michelle attended school and reiterated later in life, when like others, Obama was faced with negativity.

Obama discussed how she struggled to fit in as a “smart student” in a community where others didn’t see education as a priority. “Being smart is something you don’t have to hide,” Obama said.

Obama’s hard work paid off as she attended Whitney Young High School and later attended Princeton University which led to her becoming a lawyer.

After working as a lawyer, she didn’t feel it was the right fit career wise. “It was hard to justify in my own soul,” Obama said, “that I would walk away from a sure-fire high-paying salary that I had invested because law school was all loans, all debt.” Even though it seemed that Obama’s hard work was leading her to a dead end, it wasn’t the end of the road.

Although that road was bumpy, while attending law school at Princeton University, Obama suffered major personal losses when her close friend Suzanne and later her father both passed away.

It was soon after losing these two major people in her life that she met future husband, and future president, Barack Obama – all events that changed who she was becoming.

“This guy Barack Obama showed up at the same time and he was swerving. Just like ‘What is this?’” Obama described Barack’s all-over-the-place nature when she met him, “I describe him as a unicorn because he is so that. His entry into my life after the loss of Suzanne, loss of my father. There were a lot of punches that happened to me that made me rethink my own purpose.”

Barack and Michelle Obama soon entered the world of politics which would land them in the White House for eight years. If an incident occurred, world leaders would reach out to Barack Obama. Obama noted that “This country is beautiful, and I got to see it all.”

Throughout the Obama’s time in the White House, it wasn’t always filled with positive moments. The Obama’s faced almost a decade of constantly having the public eye watching them and being scrutinized harshly.

In and out of the White House, the Obama’s faced harsh criticism. “Our approach is ‘do the work,’” Obama said. “Put your head down, do your job, do it excellently and let your work speak for itself.”

When we face negativity in our lives, Obama noted that we become afraid to share our stories.

“Our fear that our story doesn’t matter chokes us,” said Obama. “It keeps us silent because we’re afraid of putting our true selves on the table because we think we are not worthy…”

Obama noted that our experiences are what shape us and that our day-to-day stories help us figure out who we are.

“What I wish for people is to find that truth in themselves and then maybe be open to finding it in somebody else. Giving someone else the break, understanding their story,” Obama said. “I pray that we seek to find that empathy in each other and give each other the fricken benefit of the doubt.”

Becoming, $19.50 US, The Crown Publishing Group